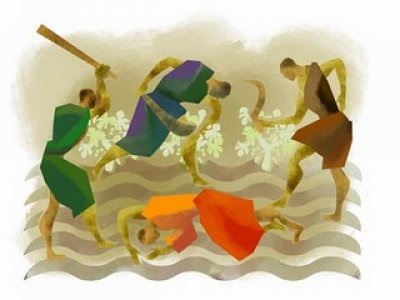 Let me now sing of my friend, my friend's song concerning his vineyard. My friend had a vineyard on a fertile hillside; he spaded it, cleared it of stones, and planted the choicest vines; within it he built a watchtower, and hewed out a wine press. Then he looked for the crop of grapes, but what it yielded was wild grapes.

Now, inhabitants of Jerusalem and people of Judah, judge between me and my vineyard: What more was there to do for my vineyard that I had not done? Why, when I looked for the crop of grapes, did it bring forth wild grapes? Now, I will let you know what I mean to do with my vineyard: take away its hedge, give it to grazing, break through its wall, let it be trampled! Yes, I will make it a ruin: it shall not be pruned or hoed, but overgrown with thorns and briers; I will command the clouds not to send rain upon it. The vineyard of the LORD of hosts is the house of Israel, and the people of Judah are his cherished plant; he looked for judgment, but see, bloodshed! for justice, but hark, the outcry!

Have no anxiety at all, but in everything, by prayer and petition, with thanksgiving, make your requests known to God. Then the peace of God that surpasses all understanding will guard your hearts and minds in Christ Jesus.

Jesus said to the chief priests and the elders of the people: "Hear another parable. There was a landowner who planted a vineyard, put a hedge around it, dug a wine press in it, and built a tower. Then he leased it to tenants and went on a journey. When vintage time drew near, he sent his servants to the tenants to obtain his produce. But the tenants seized the servants and one they beat, another they killed, and a third they stoned. Again he sent other servants, more numerous than the first ones, but they treated them in the same way. Finally, he sent his son to them, thinking, 'They will respect my son.'But when the tenants saw the son, they said to one another, 'This is the heir. Come, let us kill him and acquire his inheritance.' They seized him, threw him out of the vineyard, and killed him. What will the owner of the vineyard do to those tenants when he comes?" They answered him, "He will put those wretched men to a wretched death and lease his vineyard to other tenants who will give him the produce at the proper times." Jesus said to them, "Did you never read in the Scriptures: The stone that the builders rejected has become the cornerstone; by the Lord has this been done, and it is wonderful in our eyes? Therefore, I say to you, the kingdom of God will be taken away from you and given to a people that will produce its fruit."

Grave indeed are the consequences when those given the sacred authority to do work for God fail to use it in accordance with His will. The vineyard of the Lord, planted “on a fertile hillside” and cultivated to produce “the choicest vines” (Is. 5:1-2), was the house of Israel. As God's first-born son (cf. Ex. 4:22), chosen by God as his “special possession” among all nations; and called to become “a kingdom of priests, a holy nation” (Ex. 19:5-6); Israel's mission was to lead all nations by example until every one of them would live in holiness. When Israel spurned the assigned duty and misused its special privileges despite numerous warnings from God, including the warning so eloquently presented in the prophet Isaiah's Vineyard Song, the result was utter devastation and humiliation: both Israel and Judah fell to the invasions of Assyria and Babylonia in 724 B.C. and 587 B.C. respectively.

In the gospel, Jesus picked up from where Isaiah left off, extending the Vineyard Song to target those who had been given the authority to look after the spiritual well-being of the Jews, including the chief priests and the elders who, as Jesus predicted, would go on to kill him, the Son of God. Their failure to heed Jesus' warning eventually brought Jerusalem to its fateful demise – the horrendous destruction of the city and the holy Temple, and the ghastly massacre of its inhabitants at the hands of the Romans in 70A.D. Like harlots who “drunk on the blood of the holy ones” (Rev. 17:6), these leaders who compromised God's authority for the sake of their own selfish gains “shall drink, and be convulsed, and go mad” (Jer. 25:16); for the cup they drank from was filled with “the wine of the fury and wrath of God the Almighty” (Rev 19:15). They were stripped of their authority. Stepping in to take over from them was the Petrine Church that Jesus instituted (cf. Mt. 16:13ff).

The Bible is not history per se, but it contains history (see Response of the Pontifical Biblical Commission on Genesis, Q3, June 30, 1909). Of the whole parade of historical figures that appeared on the stage of biblical drama – patriarchs, judges, kings, prophets, priests, chosen people, Gentiles, soldiers, shepherds, rabbis, tax collectors, prostitutes, beggars, criminals – the Temple leaders, the shepherds whose sacred duty it was to guard the spiritual well-being of God's people, stood out as one of the most prominent groups of people against whom God was most unremitting in exacting His severe judgement when they failed to exercise their authority in accordance with His will. “My wrath is kindled against the shepherds, and I will punish the leaders,” God warned through the prophet Zechariah (Zech 10:3, see also Eze 34:1ff, Jn 10:7ff).

Those who are the shepherds of the New Israel – the Church – including the Church Magisterium; the bishops and the clergy; the religious and the catechists, myself included; the church ministry leaders; let's look into the mirror and think this over seriously. Are we not similar to the shepherds of the Israel of old in many ways? Are we not entrusted with the sacred authority of looking after the spiritual well-being of God's people? Are we exempt from God's wrath just because we are ministering in the Church of Christ and no longer in the Jerusalem Temple? Are we the true shepherds who care about their sheep? Do we strengthen the weak and bind up the injured? Do we bring back the strayed and seek the lost? Or, do we feed off their milk, wear their wool, slaughter the fatlings, and lord it over them harshly? (cf. Ez 34:3-4) Are we “thieves and robbers”? (Jn. 10:8)