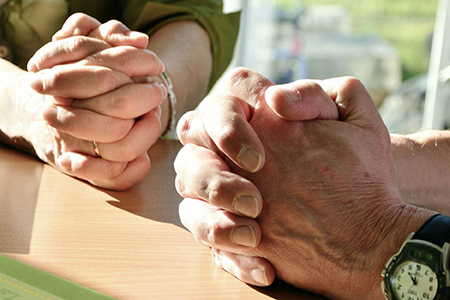 In discussing Abraham’s faith, the author of Hebrews puts the emphasis on Abraham’s trust in God even if what God wants him to do is a big unknown: “By faith Abraham obeyed when he was called to go out to a place that he was to receive as an inheritance; he went out, not knowing where he was to go” (Heb 11:8). Similarly, he doesn’t know how God’s promise to give him a son and make his “descendants as numerous as the stars in the sky and as countless as the sands on the seashore” can possibly be realized given his old age and Sarah’s sterility. But he continues to trust and obey God “for he thought that the one who had made the promise was trustworthy” (Heb 11:11-12).

The litmus test of Abraham’s faith – obeying God’s command even when it defies all logics and human understanding – is the sacrifice of his only son, Isaac. The author of Hebrews makes this insightful comment in reflecting on this perplexing and hugely unusual story: “[H]e who had received the promises was ready to offer his only son, of whom it was said, ‘Through Isaac descendants shall bear your name.’ He reasoned that God was able to raise even from the dead” (Heb 11:17-19). In other words, intrinsic in Abraham’s faith is his conviction that God can, and will, keep His promise even when it’s impossible to do so from a human perspective.

To think about it, this is really the essence of the whole Gospel. As soon as Adam and Eve fell to Satan’s temptation and separated themselves from God by allowing the human nature to be tainted by sin, God immediately promised salvation through the woman’s offspring who “will strike at [Satan’s] head, while you strike at his heel” (Genesis 3:15). From a human perspective, God’s promise is truly a mission impossible. How can the offspring of Eve – whether it be Caine or Abel or Seth – strike at Satan’s head and restore the human nature, which has been tainted by sin (c.f. Genesis 4)? It is a humanly impossible undertaking and has never happened.

As it turns out, the offspring of Eve is Jesus, who descends from Seth. Through his incarnation, death and resurrection, not only does he restore the human nature to its original state of righteousness, he also elevates all of us to a new height by making us children of God! “[A]n inheritance that is imperishable, undefiled, and unfading” has been kept in heaven, waiting for us to claim (1 Peter 1:4). A mission that has appeared totally impossible is now not only possible but also successfully accomplished because the offspring of Eve is not only human but also divine. He is God Himself! Who could have anticipated and understood God’s plan, wisdom, and power?

Time and time again, the Bible proves to us that God is a Father who keeps his promises. We don’t know how He does it, but sure enough He does – without fail! Now we can understand why Jesus would ask his disciples not to be afraid any longer in this Sunday’s gospel reading (c.f. Luke 12:32). Like the “servants who await their master’s return from a wedding”, we must remain faithful, vigilant, hopeful, and prepared (Luke 12:36). We don’t know how, and we don’t know when, but Jesus will return as he promised. When he does, we’d better be ready!