Mass as Heaven on Earth 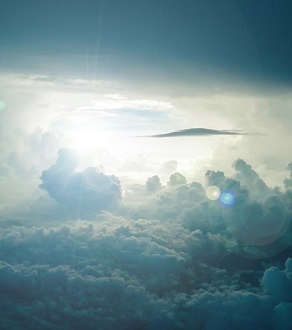 Sirach 3:17-18,20-28-29
My child, conduct your affairs with humility, and you will be loved more than a giver of gifts. Humble yourself the more, the greater you are, and you will find favor with God. What is too sublime for you, seek not, into things beyond your strength search not. The mind of a sage appreciates proverbs, and an attentive ear is the joy of the wise. Water quenches a flaming fire, and alms atone for sins.

Hebrews 12:18-19,22-24A
Brothers and sisters: You have not approached that which could be touched and a blazing fire and gloomy darkness and storm and a trumpet blast and a voice speaking words such that those who heard begged that no message be further addressed to them. No, you have approached Mount Zion and the city of the living God, the heavenly Jerusalem, and countless angels in festal gathering, and the assembly of the firstborn enrolled in heaven, and God the judge of all, and the spirits of the just made perfect, and Jesus, the mediator of a new covenant, and the sprinkled blood that speaks more eloquently than that of Abel.

Luke 14:1,7-14
On a sabbath Jesus went to dine at the home of one of the leading Pharisees, and the people there were observing him carefully. He told a parable to those who had been invited, noticing how they were choosing the places of honor at the table. “When you are invited by someone to a wedding banquet, do not recline at table in the place of honor. A more distinguished guest than you may have been invited by him, and the host who invited both of you may approach you and say, ‘Give your place to this man,’ and then you would proceed with embarrassment to take the lowest place. Rather, when you are invited, go and take the lowest place so that when the host comes to you he may say, ‘My friend, move up to a higher position.’ Then you will enjoy the esteem of your companions at the table. For every one who exalts himself will be humbled, but the one who humbles himself will be exalted.” Then he said to the host who invited him, “When you hold a lunch or a dinner, do not invite your friends or your brothers or your relatives or your wealthy neighbors, in case they may invite you back and you have repayment. Rather, when you hold a banquet, invite the poor, the crippled, the lame, the blind; blessed indeed will you be because of their inability to repay you. For you will be repaid at the resurrection of the righteous.”

While the focus of this Sunday’s readings is humility (“but the one who humbles himself will be exalted” (Luke 14:11)) and helping the poor and weak (“when you hold a banquet, invite the poor, the crippled, the lame, the blind” (Luke 14:13)), let’s not lose sight of the significance of the theme of the second reading. What’s really remarkable about this Hebrews passage is the author’s ability to see the invisible and awe-inspiring reality underlying a setting that many people see as just another chapter of Israel’s history. Let me explain.

God, who is majestic and omnipotent, can be frightening when He appears to us lowly mortals, so we learn from this Sunday’s second reading. Referring to Israel’s experience at Mount Sinai as recorded in Exodus 19 and Deuteronomy 4, the author of Hebrews recalls the terrifying scene of epiphany when Yahweh descended upon the mountain with a dramatic display of fire and smoke and blaring trumpets (Heb 12:18; Ex 19:16-20; Deut 4:11) - a scene that made even Moses tremble (Heb 12:21).

The author of Hebrews takes great pains to convince his readers that what Israel experienced at Mt. Sinai, a special place of liturgy, or “a special altar” if you will, which “could be touched” (v.18) or seen, mysteriously gives us a glimpse into the sacred sanctuary of heaven – the heavenly altar - that cannot be touched or seen. Who are the people celebrating this celestial liturgy of heaven? “Countless angels”, “the firstborn enrolled in heaven”, “the spirits of the just made perfect”, “God the judge of all”, and Jesus the mediator of a new covenant” (vv. 22-24). What are they doing up there in the presence of God and His Son? Worshiping with great joy.

The two places, one earthly and the other heavenly, one visible the other invisible, are somehow closely connected – Mt. Sinai pointing to the sacred sanctuary of heaven, the Mt. Sinai liturgy culminating in the heavenly liturgy. And the author of Hebrews, with his eyes of faith, sees it! He sees Mt. Zion, which symbolizes the heavenly Jerusalem (“you have approached Mount Zion and the city of the living God, the heavenly Jerusalem” (v. 22)), in Mt. Sinai. He sees the Church Triumphant in Israel, an integral part of the Church Militant. He sees “Jesus, the mediator of a new covenant”, in Moses, the mediator of Israel (v. 24). Above all, he sees the joy of heavenly worship in the fear that the lowly mortals, particularly the Israelites on Mt. Sinai, exhibit on seeing God.

The author of Hebrews sees the future in the present, the invisible underlying the visible, the sacred through the earthly, the extraordinary out of the ordinary because he sees through the eyes of faith – faith which “is the realization of what is hoped for and evidence of things not seen” (11:1). What he sees as happening at Mt. Sinai, we also need to see as happening in the Mass liturgy because at Mass, we are already in heaven! Let’s conclude this reflection with an astounding statement extracted from the Catechism which bears much resemblance to the Hebrews passage that is being discussed:

“In the earthly liturgy we share in a foretaste of that heavenly liturgy which is celebrated in the Holy City of Jerusalem toward which we journey as pilgrims, where Christ is sitting at the right hand of God, Minister of the sanctuary and of the true tabernacle. With all the warriors of the heavenly army we sing a hymn of glory to the Lord…” (CCC 1090).