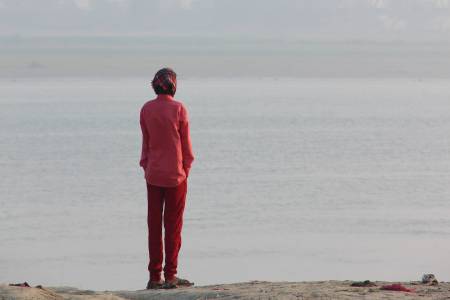 (Vatican News) During his catechesis at the General Audience, Pope Francis says desolation and sadness, though considered to be a negative experience, can teach us important things and strengthen us spiritually, if we know how to traverse it with openness and awareness.

Continuing his cycle of reflections on the theme of discernment, Pope Francis said that discernment, which is not primarily a logical procedure, is “based on actions, and actions have an affective connotation which must be acknowledged, because God speaks to the heart.”

He focused his catechesis during the Wednesday General Audience on the first affective mode and an object of discernment: desolation.

Recalling the Spiritual Exercises of St. Ignatius of Loyola, Pope Francis said desolation can be defined as “darkness of soul, disturbance in it, movement to things low and earthly, the unquiet of different agitations and temptations, moving to want of confidence, without hope, without love, when one finds oneself all lazy, tepid, sad and as if separated from his Creator and Lord.”

He noted that all of us have experienced desolation in some way but the problem we face is how to interpret it, because desolation has something important to tell us and we risk losing it if we are in a hurry to free ourselves of the feeling of emptiness.

He added that inasmuch as we would all like a life that is always joyful, cheerful and fulfilled, this is not always possible and would also not be good for us as “the change from a life oriented towards vice can start from a situation of sadness, of remorse for what one has done.”

Explaining further, Pope Francis said that the word “remorse”, from the etymological viewpoint, means “the conscience that bites (in Italian, mordere) that does not permit peace.”

In fact, Alessandro Manzoni in his book “The Betrothed” described remorse as an opportunity to change one’s life in the famous dialogue between Cardinal Federico Borromeo and the Unnamed, who, after a terrible night, presents himself destroyed by the cardinal, who addresses him with surprising words.

Pope Francis also stressed on the importance of learning to “read” sadness, which is mostly considered negatively, but instead, “can be an indispensable alarm bell for life, inviting us to explore richer and more fertile landscapes that transience and escapism do not permit.”

St. Thomas, in the Summa Theologica, defines sadness as “a pain of the soul” - like the nerves for the body, it redirects our attention to a possible danger, or a disregarded benefit. Hence, sadness is “indispensable for our health; it protects us from harming ourselves and others” and “would be far more serious and dangerous if we did not feel this,” the Pope said.

Moreover, for those who have the desire to do good, sadness is “an obstacle with which the tempter tries to discourage us” and in that case, one must act in a manner exactly contrary to what is suggested, determined to continue what one had set out to do.

The Pope further recalled the Gospels’ reminder that the road to goodness is narrow and uphill, requiring combat and self-conquest. He urged those who wish to serve God not to be led astray by desolation, especially as some people, unfortunately, abandon a life of prayer or choice they have made, driven by desolation, “without first pausing to consider this state of mind, and especially without the help of a guide.”

“A wise rule says not to make changes when you are desolate. It will be the time afterwards, rather than the mood of the moment, that will show the goodness or otherwise of our choices.”

Trials are an important moment

Pope Francis then pointed to the example of Jesus who repelled temptations with an attitude of firm resolution. Trials assailed him from all sides, but Jesus was determined to do the will of the Father and they failed to hinder his path.

In spiritual life, said the Pope, “trial is an important moment” because “when you come to serve the Lord, prepare yourself for trials” (Sir 2:1). Similarly, a professor only accepts that a student has passed the test after he has examined the student to see if the student knows the essentials of the subject.

“If we know how to traverse loneliness and desolation with openness and awareness, we can emerge strengthened in human and spiritual terms. No trial is beyond our reach.”

Pope Francis concluded by re-echoing St. Paul’s words that no one is tempted beyond his or her ability, because the Lord never abandons us, and with him close by, we can overcome every temptation.

Source: Pope at Audience: Spiritual desolation can strengthen us if we listen to God