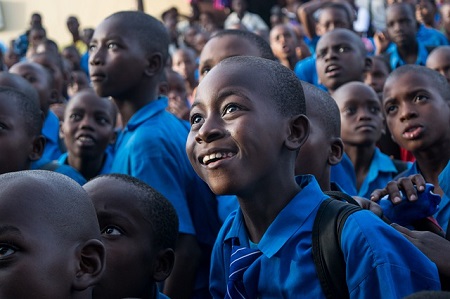 (CNA).- Upon his return to the Vatican after a six-day trip to Africa, Pope Francis said Wednesday that he hopes the "seeds of peace" sown during his apostolic journey will bear fruit in Mozambique, Madagascar, and Mauritius.

“I thank God who allowed me to make this journey as a pilgrim of peace and hope,” Pope Francis said in St. Peter’s Square Sept. 11.

“The hope of the world is Christ, and his Gospel is the most powerful leaven of fraternity, freedom, justice and peace for all people. With my visit, in the footsteps of holy missionaries, I tried to bring this leaven, the leaven of Jesus, to the Mozambican, Malagasy and Mauritian populations,” he said.

Pope Francis said that the Church will continue to support the peace process in Mozambique, which advanced in August, and he thanked the Catholic community of Saint’Egidio for their continued contributions to this dialogue.

“In Mozambique I went to spread seeds of hope, peace and reconciliation in a land that has suffered so much in the recent past due to a long armed conflict, and that last spring was hit by two cyclones that caused very serious damage,” the pope said.

Mozambique fought a civil war from 1977 to 1992 between Frelimo, a socialist party that has ruled the country since it gained independence in 1975, and Renamo, an anti-communist organization. Renamo began a new insurgency in 2013, a conflict that only came to an end in August with the signing of a peace agreement in Serra da Gorongosa.

“The Church continues to accompany the peace process, which has taken a step forward on August 1st with a new agreement between the parties,” the pope said.

“Let us give thanks to God, and ask him that the seeds sown during this apostolic journey will bear abundant fruit for the people of Mozambique, Madagascar and Mauritius,” he said.

The pope reflected that there was much joy amid the rain during the Mass he celebrated in Maputo, Mozambique.

“My visit to Mozambique culminated in Mass, celebrated in the stadium in the rain, but we were all happy. The songs, the religious dances ... so much happiness. The rain didn't matter,” Francis said.

“And there resounded the appeal of the Lord Jesus: 'Love your enemies', the seed of true revolution, that of love, which extinguishes violence and generates fraternity,” he added.

After three days in Mozambique, Pope Francis traveled to Madagascar, where he visited the country’s “City of Friendship,” a town built through the leadership of an Argentine priest who sought solidarity with the poorest of the poor.

Pope Francis reflected that Madagascar is a country rich in natural resources and natural beauty, but marked by much poverty.

“I hope that, inspired by its traditional spirit of solidarity, the Malagasy people can overcome adversity and build a future of development by combining respect for the environment and social justice,” he said.

In his meeting with bishops in Madagascar, Pope Francis said that they renewed together a commitment to care for the poor and to be “sowers of peace and hope.”

Pope Francis ended his six-day trip to Africa on the island nation of Mauritius. “I chose it because it is a place of integration between different ethnic groups and cultures,” Pope Francis said, noting the different immigrants from India and other countries who have come to call the tourist destination home over the past two centuries.

Mauritius obtained its independence on March 12, 1968, after more than 200 years of colonization by the French and the British following years of Dutch and Portuguese settlements.

The country is made up of many different ethnic groups, primarily Indo-Mauritian, Creole, Sino-Mauritian, and Franco-Mauritian. The primary religion on the island is Hinduism, followed by Catholicism and Islam.

“There is strong inter-religious dialogue, and also friendship between the heads of different religious denominations. Something that would seem strange to us, but they thus experience the friendship that is natural,” Francis reflected.

The pope said that in Mauritius he found a beautiful bouquet of flowers upon entering the chancery. It was sent as a gift from the grand imam as a sign of brotherhood.

Francis said that he was also impressed to see Muslims and Catholics working together in an HIV treatment clinic in Mozambique run by the Community of Sant'Egidio, a lay movement centered on peace and helping the poor.

On his return flight to Rome, Pope Francis said during an in-flight press conference that he was touched by how the African people in the crowds lifted up their children for him to see.

“Africa is full of life,” Pope Francis said. “It is the treasure of the poor, the child.”