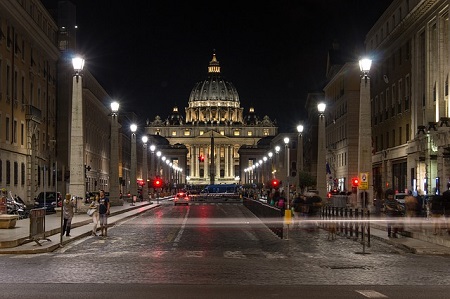 (CNA).- Pope Francis said Wednesday that slander is a 'diabolical cancer' that seriously damages the Church.

“We know that slander always kills. This 'diabolical cancer,' which arises from the desire to destroy a person's reputation, also attacks the rest of the ecclesial body,” Pope Francis said Sept. 25 in his general audience in St. Peter's Square.

The pope warned that slander seriously damages the Church when “there is a coalition to smear someone” due to “petty interests or to cover up their own inadequacies.”

The Catholic Church teaches that the sins of slander, or calumny, involve remarks contrary to the truth that harm the reputation of others and give occasion for false judgments concerning them.

“To avoid rash judgement, everyone should be careful to interpret insofar as possible his neighbor's thoughts, words, and deeds in a favourable way,” paragraph 2478 of the Catechism of the Catholic Church states.

“Honor is the social witness given to human dignity, and everyone enjoys a natural right to the honor of his name and reputation and to respect. Thus, detraction and calumny offend against the virtues of justice and charity,” the catechism states.

Pope Francis pointed to the Sanhedrin's false witnesses and accusations made against Jesus before his crucifixion, and the slanders against Christian martyrs throughout history.

He focused on the Acts of the Apostles account of St. Stephen's strong words in response to his slanderers' before his martyrdom.

“Stephen bravely denounces the hypocrisy with which the prophets and Christ himself have been treated,” Francis said. “He speaks clearly, he tells the truth.”

“This causes the violent reaction of the listeners, and Stephen is sentenced to death, sentenced to stoning,” he added.

Pope Francis noted that Stephen did not “look for loopholes” or “appeal to personalities who could save him” after his death sentence, but instead “put his life back into the Lord's hands.”

“Stephen's prayer is beautiful at that moment: 'Lord Jesus, receive my spirit,'” he said.

“He died as a son of God, forgiving: ‘Lord, do not hold this sin against them.' These words of Stephen teach us that it is not fine speeches that reveal our identity as children of God, but only the abandonment of one's life in the hands of the Father and forgiveness for those who offend us, who see the quality of our faith,” Pope Francis said.

The pope said that the Acts of the Apostles also recounts “the emergence of some problems within the Christian community.”

“There have always been problems,” the pope said.

The apostles had to determine how to harmonize the differences that coexisted within the early Christian community "without conflicts or splits happening,” he said.

“The Apostles begin a process of discernment which consists in considering the difficulties well and seeking solutions together,” Pope Francis explained. “They find a way out in dividing up the various tasks for peaceful growth of the entire ecclesial body and avoiding neglecting both the ‘race' of the Gospel and the care of the poorest members.”

The pope said that martyrdom also ensured the growth and fruitfulness of the People of God.

“We also ask the Lord that, looking at the martyrs of yesterday and today, we can learn to live a full life, welcoming the martyrdom of daily fidelity to the Gospel and of conformation to Christ,” Pope Francis said.

Remembering the Martyrs on All Saints Day