What the Human Eyes Cannot See 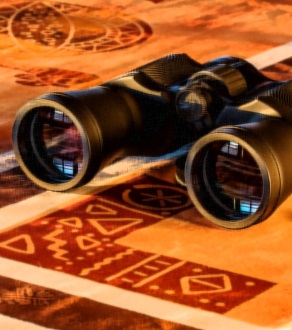 1 Kings 19:4-8
Elijah went a day’s journey into the desert, until he came to a broom tree and sat beneath it. He prayed for death saying: “This is enough, O LORD! Take my life, for I am no better than my fathers.” He lay down and fell asleep under the broom tree, but then an angel touched him and ordered him to get up and eat. Elijah looked and there at his head was a hearth cake and a jug of water. After he ate and drank, he lay down again, but the angel of the LORD came back a second time, touched him, and ordered, “Get up and eat, else the journey will be too long for you!” He got up, ate, and drank; then strengthened by that food, he walked forty days and forty nights to the mountain of God, Horeb.

Ephesians 4:30 - 5:2
Brothers and sisters: Do not grieve the Holy Spirit of God, with which you were sealed for the day of redemption. All bitterness, fury, anger, shouting, and reviling must be removed from you, along with all malice. And be kind to one another, compassionate, forgiving one another as God has forgiven you in Christ. So be imitators of God, as beloved children, and live in love, as Christ loved us and handed himself over for us as a sacrificial offering to God for a fragrant aroma.

John 6:41 - 51
The Jews murmured about Jesus because he said, “I am the bread that came down from heaven, ” and they said, “Is this not Jesus, the son of Joseph? Do we not know his father and mother? Then how can he say, ‘I have come down from heaven’?” Jesus answered and said to them, “Stop murmuring among yourselves. No one can come to me unless the Father who sent me draw him, and I will raise him on the last day. It is written in the prophets: They shall all be taught by God. Everyone who listens to my Father and learns from him comes to me. Not that anyone has seen the Father except the one who is from God; he has seen the Father. Amen, amen, I say to you, whoever believes has eternal life. I am the bread of life. Your ancestors ate the manna in the desert, but they died; this is the bread that comes down from heaven so that one may eat it and not die. I am the living bread that came down from heaven; whoever eats this bread will live forever; and the bread that I will give is my flesh for the life of the world.”

Summer in Toronto is a beauty. Too bad it is so short. This summer of mine began with a 8-day cruise trip from Vancouver to Alaska, on which I was reunited – or reacquainted – with three very good secondary school classmates whom I had not seen for almost 40 years. Every evening on the cruise, we would gather in my cabin to play “catch-up”, rediscovering 40 missing years of one another’s whereabouts, undertakings, accomplished ideals, and unfulfilled aspirations.

At one of the evening meetings, I recounted the story of my personal conversion, how it happened to me almost 20 years ago, and how it changed me drastically from a “Church rebel” to an apologist whose life now featured only Christ and the Church as its centerpiece. They listened to my story intently and with great respect. At the same time, if my perception was correct, there was also a little bit of skepticism. “Really…?”

Maybe the skepticism was just suspicion on my part. But if it was true, I wouldn’t blame them. After all, they knew me well. They remembered well my shortcomings as a youth. They knew where I came from, how I grew up, how I craved for “good look”, earthly success, and honor. “Ah, so all of a sudden you want to be a saint, eh? I see…” They probably believed they got me “figured out”.

What they could not figure out – what the human eyes could not see and human reason could not fathom – however, was my spiritual transformation, which my personal misdeeds and shortcomings, no matter how bad, could not impede; and my ancestral roots, whether extraordinary or common, could not generate. It was the work of the Holy Spirit who, like the wind, “blows where it wills” (Jn 3:8). It was God’s grace that saved in spite of my wretchedness; illuminated in spite of my blindness; and lifted aloft in spite of my lowliness.

In today’s gospel, Jesus’ contemporaries also thought they had Jesus figured out because they knew his family and where he came from (cf. Jn 6:42). How could the carpenter’s son whom they knew so well make the ridiculous claim that he “came down from heaven” (Jn 6:41), they wondered. Jesus’ true origin is something no human eyes can see and no human reason can fathom because he is divine. So is the conversion of a sinner's heart.