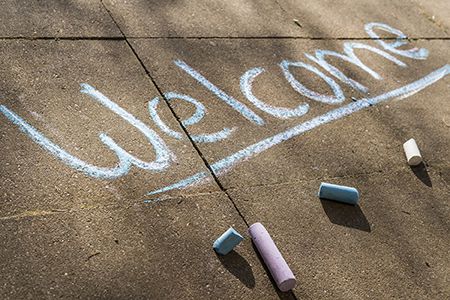 EZEKIEL 2:2-5
As the LORD spoke to me, the spirit entered into me and set me on my feet, and I heard the one who was speaking say to me: Son of man, I am sending you to the Israelites, rebels who have rebelled against me; they and their ancestors have revolted against me to this very day. Hard of face and obstinate of heart are they to whom I am sending you. But you shall say to them: Thus says the Lord GOD! And whether they heed or resist—for they are a rebellious house— they shall know that a prophet has been among them.

2 CORINTHIANS 12:7-10
Brothers and sisters: That I, Paul, might not become too elated, because of the abundance of the revelations, a thorn in the flesh was given to me, an angel of Satan, to beat me, to keep me from being too elated. Three times I begged the Lord about this, that it might leave me, but he said to me, “My grace is sufficient for you, for power is made perfect in weakness.” I will rather boast most gladly of my weaknesses, in order that the power of Christ may dwell with me. Therefore, I am content with weaknesses, insults, hardships, persecutions, and constraints, for the sake of Christ; for when I am weak, then I am strong.

MARK 6:1-6
Jesus departed from there and came to his native place, accompanied by his disciples. When the sabbath came he began to teach in the synagogue, and many who heard him were astonished. They said, “Where did this man get all this? What kind of wisdom has been given him? What mighty deeds are wrought by his hands! Is he not the carpenter, the son of Mary, and the brother of James and Joses and Judas and Simon? And are not his sisters here with us?” And they took offense at him. Jesus said to them, “A prophet is not without honor except in his native place and among his own kin and in his own house.” So he was not able to perform any mighty deed there, apart from curing a few sick people by laying his hands on them. He was amazed at their lack of faith.

The theme of prophecy permeates all four of this Sunday’s readings, including the Psalm verses, in which God’s mercy is sought “for we are more than sated with contempt… [and] the mockery of the arrogant” – a feeling of agony and desolation shared by all the prophets that the Lord God commissioned and sent through the ages to bring His word to His people, from Samuel to Ezekiel, down to Jesus himself.

The commissioning of Ezekiel in reading one sounded more like a punishing exile order than a sacred calling to prophecy. If “sending” were replaced by “sentencing”, God’s announcement to Ezekiel would become a verdict that’s downright damning: “I am [sentencing] you to the Israelites, rebels who have rebelled against me…Hard of face and obstinate of heart are they to whom I am [sentencing] you.]

Although Paul’s ministry is considered specifically an apostolic one, the parallels with the ministry of a classic prophet are hard to overlook. Like a prophet, he has experienced an “abundance of revelations”. “[W]eaknesses, insults, hardships, persecutions, and constraints” are part of his ministry, just as such experiences were integral to the ministry of every genuine prophet of Israel who came before him.

This takes us to Jesus, the Prophet that God promised to raise up for Israel “from among their kinsmen…[who]shall tell them all that I command him”; one like Moses “whom the Lord knew face to face” (Deut 18:18, 34:10; J. Ratzinger, Jesus of Nazareth I, p.236). Like all the prophets of old, Jesus’ message is rejected by Israel. But Mark makes a point of highlighting Jesus’ abandonment by those who are closest to him. They believe they have gotten him all figured out. “Is he not the carpenter, the son of Mary?” According to Mark, they quickly write him off and “took offense at him”.

“The holy People of God shares also in Christ’ prophetic office” by virtue of the baptismal grace (CCC 785). We are his witnesses in the world. As Fountain of Love and Life volunteers, we actively go out into the world to proclaim the gospel. Our mission is by no means easy; sometimes it can be downright frustrating. But if Jesus, the Prophet of all prophets, was given the cold shoulder by the people “in his native place and among his own kin and in his own house”; why should we expect our mission in exercising Jesus’ prophetic office to be any easier?

Paul has a message for us, the prophetic people of Christ. It is both pragmatic and profound and is clearly spelled out for us in this Sunday’s second reading. When it comes to dealing with adversities that test our stamina in our endeavor to proclaim the word of God, “I am content with weaknesses, insults, hardships, persecutions, and constraints, for the sake of Christ; for when I am weak, then I am strong”. No one is in a stronger position to prove the wisdom of this teaching than Jesus, whose moment of weakness on the cross was precisely his moment of strength. For it was then that Satan was soundly defeated, and the sting of death completely eradicated.

20 Years of “Julia Wong and Friends”

A Journey from Head to Heart