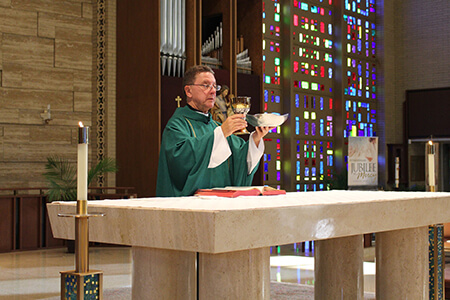 Sirach 3:17-18,20-28-29
My child, conduct your affairs with humility, and you will be loved more than a giver of gifts. Humble yourself the more, the greater you are, and you will find favor with God. What is too sublime for you, seek not, into things beyond your strength search not. The mind of a sage appreciates proverbs, and an attentive ear is the joy of the wise. Water quenches a flaming fire, and alms atone for sins.

Hebrews 12:18-19,22-24A
Brothers and sisters: You have not approached that which could be touched and a blazing fire and gloomy darkness and storm and a trumpet blast and a voice speaking words such that those who heard begged that no message be further addressed to them. No, you have approached Mount Zion and the city of the living God, the heavenly Jerusalem, and countless angels in festal gathering, and the assembly of the firstborn enrolled in heaven, and God the judge of all, and the spirits of the just made perfect, and Jesus, the mediator of a new covenant, and the sprinkled blood that speaks more eloquently than that of Abel.

Luke 14:1,7-14
On a sabbath Jesus went to dine at the home of one of the leading Pharisees, and the people there were observing him carefully. He told a parable to those who had been invited, noticing how they were choosing the places of honor at the table. “When you are invited by someone to a wedding banquet, do not recline at table in the place of honor. A more distinguished guest than you may have been invited by him, and the host who invited both of you may approach you and say, ‘Give your place to this man,’ and then you would proceed with embarrassment to take the lowest place. Rather, when you are invited, go and take the lowest place so that when the host comes to you he may say, ‘My friend, move up to a higher position.’ Then you will enjoy the esteem of your companions at the table. For every one who exalts himself will be humbled, but the one who humbles himself will be exalted.” Then he said to the host who invited him, “When you hold a lunch or a dinner, do not invite your friends or your brothers or your relatives or your wealthy neighbors, in case they may invite you back and you have repayment. Rather, when you hold a banquet, invite the poor, the crippled, the lame, the blind; blessed indeed will you be because of their inability to repay you. For you will be repaid at the resurrection of the righteous.”

It is clear what the theme of this Sunday is. Humility. It permeates every verse of the first reading: “My child, conduct your affairs with humility…Humble yourself the more, the greater you are…” (Sir 3:17-18). In the gospel, it is also Jesus’ message when he asks people to take the lowest place at the wedding banquet table out of humility. What is not so clear, however, is why the featured story of this Sunday’s second reading is from Hebrews 12 - the frightening scene of the Sinai theophany. While the spectacle is impressive, what do the stern and terrifying atmosphere of Mount Sinai and a whole generation of Israelites cowering under the threat of “a blazing fire and gloomy darkness and storm and a trumpet blast” have to do with the overall theme of humility (Hebrews 12:18-19)? Let’s think this through carefully.

To understand the Hebrews 12 passage properly, one must read it in the context of the whole book of Hebrews. One common thread running through Hebrews is the stark contrast between the visible and invisible dimensions, and the earthly and heavenly elements. To the author, the visible and the earthly are signs prefiguring, or pointing us to, the invisible and the heavenly. Numerous are the examples, but in this brief reflection we shall highlight just one to illustrate our point. In the OT, the high priest represents the people of Israel to offer gifts and sacrifices in the tabernacle for the redemption of their sins. But the offering of created things – harvests, birds, animals – in an earthly structure built by human hands is incapable of redeeming sins. Hebrews understands such offerings as a sign foreshadowing and pointing us to Jesus’ redemptive offering of his own body on the cross. He is the eternal High Priest who entered into the invisible sanctuary of heaven and offered his own blood to obtain eternal redemption for all.

Similarly, Mount Sinai, “which could be touched”, and the terrorizing theophany that Israel experienced are a sign pointing us to Mount Zion, “the city of the living God, the heavenly Jerusalem” (12:18, 22). Who are the people gathering in the heavenly Jerusalem? “[C]ountless angels in festal gathering, and the assembly of the firstborn enrolled in heaven, and God the judge of all, and the spirits of the just made perfect, and Jesus, the mediator of a new covenant” (12:22-24). What is the occasion of this gathering? It’s a liturgical worship. But why worship? Don’t they have better things to do? This is because worship is what life is meant to be – every moment of our life is for the glorification of God, who is the reason for our being and is worthy of the undivided attention and praise of worship. While we are not necessarily doing that in this world, that’s what we will do in heaven: living every moment of our life for God and in union with Him. This is why 6 days of creation in the Genesis creation account culminates in the Sabbath – the 7th day, the day of the Lord. We are created for worship. Look at it this way: What happens to a person when he doesn’t live for God and is not in union with Him? That sounds like he’s in hell, a place of eternal damnation.

The author of Hebrews reminds the Christian community of his day that when they attend the Mass liturgy “You have not approached that which could be touched” (12:18). Through the visible liturgy, they have “approached Mount Zion and the city of the living God, the heavenly Jerusalem” to become part of the heavenly worship where “countless angels in festal gathering, and the assembly of the firstborn enrolled in heaven, and God the judge of all, and the spirits of the just made perfect, and Jesus, the mediator of a new covenant” are celebrating (12:18, 22-24, CCC 1136, 1139)!

If the Israelites at Mount Sinai, who had only “approached that which could be touched”, that which was only a sign pointing us to the real thing, were already terror-stricken; how much more should we Christians humble ourselves and go to Mass with holy fear in our hearts, knowing that what we have approached is mysteriously the real thing - “Mount Zion and the city of the living God, the heavenly Jerusalem” (12:22)? For the Mass is truly “heaven on earth”; what “we celebrate on earth is a mysterious participation in the heavenly liturgy” according to Pope St. John Paul II. People often ask: why do the Catholics genuflect, bow their heads, strike their chests, and make all kinds of gestures to humble themselves in the Mass? Now we know why.