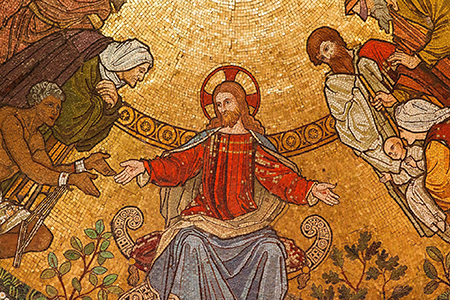 As always, this Sunday’s Liturgy of the Word is a rich source of spiritual nourishment, good for edifying the human soul and efficacious in softening our hearts of stone. While all three selected scriptural passages are interesting and deserve more than a cursory reading or listening, what really makes me think is this highly unusual claim that Jesus makes: "The children of this age marry and remarry; but those who are deemed worthy to attain to the coming age and to the resurrection of the dead neither marry nor are given in marriage” (Luke 20:34-35).

The claim is unusual in that Jesus is indisputably the original source of this eye-opening phenomenon that gives us a glimpse of our way of life in heaven. It is revealed to us based on nobody else’s teaching or authority but his own. It is 100% from him. Had it come from anyone other than Jesus, we could have rightfully asked, “How do you know?” The fact that we Christians accept Jesus’ claim unchallenged, as we do in this case, is in itself quite telling.

Think about it: How can Jesus possibly know how people in their resurrected selves will live in the age to come? Surely this is not something any human person can possibly know.

Could he be a person who lives in a special state of grace, like a visionary, or a prophet, or a person chosen by God to convey His message under the inspiration of the Spirit? Conceivably, due to divine inspiration, such people can reveal and communicate to us realities that are otherwise not within human reach.

Could he be one of those celestial creatures, like angels, who have been given some omniscient abilities that allow him to transcend the present and see the future?

Or could he be God Himself who is omniscient (all-knowing) and omnipotent (almighty)?

As Christians, we believe Jesus is no ordinary human person. Unlike the prophets and the apostles, he isn’t just a person graced by the Spirit’s inspiration; nor is he a mere angel. We accept the eschatological claim he makes in this Sunday’s gospel because we believe he is divine. He is the Son of God whom the Father has sent to reveal what we need to know for the good of our souls and our salvation. As the author of the Book of Hebrews puts it so eloquently: “In times past, God spoke in partial and various ways to our ancestors through the prophets; in these last days, he spoke to us through a son, whom he made heir of all things and through whom he created the universe, who is the refulgence of his glory, the very imprint of his being, and who sustains all things by his mighty word” (Hebrews 1:1-3).

Biblical evidence in support of Jesus’ divine nature is rich and well-substantiated, but the depth and complexity of this topic are such that we can ill afford to really delve into it in this reflection, or we’ll risk deviating from our main focus which is Christianity’s exclusive claim to God’s self-revelation in Christ.

Central to the Christian faith is the core belief that God has entered history and become man in the person of Christ. Through incarnation, God has accomplished not only the economy of salvation, which brings humanity into full reconciliation with divinity, but also a unique self-communication that unveils the innermost mystery of His Trinitarian self, his love, and his plan for us and for all creation. As St. Thomas Aquinas puts it, “goodness implies self-communication” (note 1). A God who loves will not leave His beloved in the dark. Therefore, He reveals Himself to us. This self-communication of God out of love is called “divine revelation”.

This Sunday’s gospel is a good illustration of why divine revelation, otherwise unknown and out of our reach, is important and necessary. As a result of Jesus’ revelation, now we know that we “neither marry nor are given in marriage” after resurrection. Turn this revealed truth around and it’s easy to see that in our way of life here on earth, in which we marry and are given in marriage, the whole institution of marriage – the marital relationship between husband and wife, the family, the offspring, the parenting - is but a transient way of living. Its purpose is to point us to and prepare us for something much bigger, something that doesn’t change: the eternal way of life in our resurrected self “in the coming age”.

As holy as marriage is – it is one of the seven Sacraments! - the Church rightly sees it as just a sign, a visible way of living, a tangible relationship that points us to the invisible reality of the loving union between Christ and his Church. In other words, what seems so real and tangible just because we can sense it in our daily life, is in truth just a fleeting experience that is “not so real” in the totality of the heavenly reality.

As a sacrament, marriage is a powerful means of sanctification through which our family life is infiltrated with God’s graces, preparing us well for the joyful and intimate union with God in His Trinitarian self. But it’s the means, not the end. Mistaking our earthly marriage as the “end game” will cause us to lose sight of its real purposes. Because of God’s divine self-revelation, now we know. Now we must strive to live in love and holiness as married couples, so that the heavenly union of Christ and his Bride - the Church - is manifested in the here and now of our daily family lives.