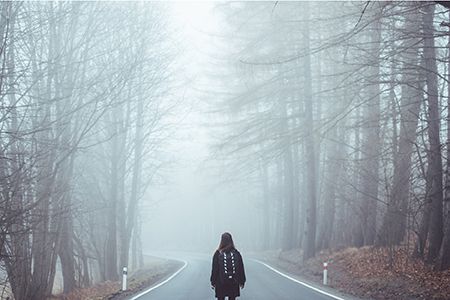 Wisdom 11:22-12:2
Before the LORD the whole universe is as a grain from a balance or a drop of morning dew come down upon the earth. But you have mercy on all, because you can do all things; and you overlook people's sins that they may repent. For you love all things that are and loathe nothing that you have made; for what you hated, you would not have fashioned. And how could a thing remain, unless you willed it; or be preserved, had it not been called forth by you? But you spare all things, because they are yours, O LORD and lover of souls, for your imperishable spirit is in all things! Therefore you rebuke offenders little by little, warn them and remind them of the sins they are committing, that they may abandon their wickedness and believe in you, O LORD!

2 Thessalonians 1:11-2:2
Brothers and sisters: We always pray for you, that our God may make you worthy of his calling and powerfully bring to fulfillment every good purpose and every effort of faith, that the name of our Lord Jesus may be glorified in you, and you in him, in accord with the grace of our God and Lord Jesus Christ. We ask you, brothers and sisters, with regard to the coming of our Lord Jesus Christ and our assembling with him, not to be shaken out of your minds suddenly, or to be alarmed either by a “spirit,” or by an oral statement, or by a letter allegedly from us to the effect that the day of the Lord is at hand.

Luke 19:1-10
At that time, Jesus came to Jericho and intended to pass through the town. Now a man there named Zacchaeus, who was a chief tax collector and also a wealthy man, was seeking to see who Jesus was; but he could not see him because of the crowd, for he was short in stature. So he ran ahead and climbed a sycamore tree in order to see Jesus, who was about to pass that way. When he reached the place, Jesus looked up and said, “Zacchaeus, come down quickly, for today I must stay at your house.” And he came down quickly and received him with joy. When they all saw this, they began to grumble, saying, “He has gone to stay at the house of a sinner.” But Zacchaeus stood there and said to the Lord, “Behold, half of my possessions, Lord, I shall give to the poor, and if I have extorted anything from anyone I shall repay it four times over.” And Jesus said to him, “Today salvation has come to this house because this man too is a descendant of Abraham. For the Son of Man has come to seek and to save what was lost.”

“For the Son of Man has come to seek and to save what was lost” (Lk 19:10). With this stunning statement from Jesus, this Sunday’s Mass readings conclude with a big bang.

Jesus, the Son of Man, is divine; he is God. In making this statement, what he is saying effectively is that God has PERSONALLY come to seek us out and to save us! “What was lost”, understood in its individual sense, refers to you and me; who are “lost” because we are sinners. When understood corporately, the term means the whole creation, which “was made subject to futility…[and] is groaning in labor pains even until now” since the fall of our first parents (Rom 8:20, 22). What is so stunning about Jesus’ claim? Think about it: God, the Almighty, in whom “all things in heaven and on earth, the visible and the invisible” were created and before whom “every knee should bend, somehow has chosen to humble Himself and descend into this lower sphere that is ours, which is both sinful and chaotic, in order to seek and save us” (Col 1:16, Phil 2:10)! If this is not stunning, I don’t know what is.

The Judeo-Christian concept that sees salvation as a top-down, divine effort from above - not a bottom-up, human effort from below - is unique and highly intriguing. Just as intriguing is the consistency of the Scriptures in advancing this idea. “It was not you who chose me, but I who chose you”, insists Jesus (John 15:16). Long before him, we have Ezekiel’s prophetic declaration: “For thus says the Lord GOD: I myself will look after and tend my sheep” (Eze 34:11, italic mine). Before Ezekiel, Isaiah’s message is just as enlightening: “Say to those whose hearts are frightened: Be strong, fear not! Here is your God, he comes with vindication; With divine recompense he comes to save you” (Is 35:4, italic mine).

“Jesus’ death”, explains Pope Benedict XVI, “[is] the fulfillment of a love in which God himself comes down to us, so as to draw us back up to himself” (Jesus of Nazareth II, p. 253). In other words, salvation is a divine initiative in which God descends to seek and save us out of love, not a human endeavor in which we ascend to attain divine greatness, as so many religions outside of the Judeo-Christian tradition generally believe. It is a cosmic and monumental undertaking carefully thought out and miraculously accomplished by God and God alone. It’s a merciful act because its benevolence we do not deserve. It’s called grace because what’s bestowed on us is from above, beyond human ability and comprehension.

Is this a totally one-sided equation – a purely God-driven undertaking that requires or allows no human input whatsoever? No. What is required – and what God has graciously allowed in order to make us a partner, no matter how small, of this monumental endeavor - is our free and humble response to God’s call for repentance. It’s exactly what Jesus asked of us when he proclaimed the coming of his kingdom: “Repent, for the kingdom of heaven is at hand” (Mt 4:17). He was inviting the world to get ready for this important partnership.

A case in point is this Sunday’s gospel. Zacchaeus, a chief tax collector in Jericho, repents upon seeing Jesus, and promises to give away half of his possessions to the poor and repay four times over anything he has extorted from anyone (Lk 19:1-2, 8). Zacchaeus repents in both words and deeds. He does so because he realizes he has sinned. And he is able to realize because he has humility in his heart, which causes him to repent. True repentance will not go unnoticed by Jesus. He sees in Zacchaeus, who is “short in stature”, a giant of a man because he, like Jesus, is willing to humble himself. He is ready for partnership; he can be saved.

It pains my heart to see that so many people still rely on their own effort to try to “find God”. They work hard to “elevate themselves spiritually to a higher level of perfection”. We like to think that we can have God in our own pockets. But we’ve got it all wrong. It’s God who finds us and reveals Himself to us; it’s Him who saves us even though jis economy of salvation always has room for our input and partnership – our repentance. This reminder from Jesus is spot on: “It is not you who chose me, but I who chose you” (John 15:16).