Is Jesus Departing for a Distant Star on His Ascension? 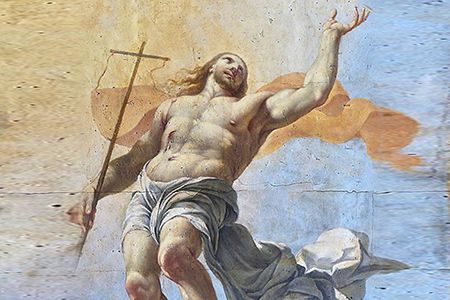 Acts 1:1-11
In the first book, Theophilus, I dealt with all that Jesus did and taught until the day he was taken up, after giving instructions through the Holy Spirit to the apostles whom he had chosen. He presented himself alive to them by many proofs after he had suffered, appearing to them during forty days and speaking about the kingdom of God. While meeting with them, he enjoined them not to depart from Jerusalem, but to wait for “the promise of the Father about which you have heard me speak; for John baptized with water, but in a few days you will be baptized with the Holy Spirit.” When they had gathered together they asked him, “Lord, are you at this time going to restore the kingdom to Israel?” He answered them, “It is not for you to know the times or seasons that the Father has established by his own authority. But you will receive power when the Holy Spirit comes upon you, and you will be my witnesses in Jerusalem, throughout Judea and Samaria, and to the ends of the earth.” When he had said this, as they were looking on, he was lifted up, and a cloud took him from their sight. While they were looking intently at the sky as he was going, suddenly two men dressed in white garments stood beside them. They said, “Men of Galilee, why are you standing there looking at the sky? This Jesus who has been taken up from you into heaven will return in the same way as you have seen him going into heaven.”

Ephesians 1:17-23
Brothers and sisters: May the God of our Lord Jesus Christ, the Father of glory, give you a Spirit of wisdom and revelation resulting in knowledge of him. May the eyes of your hearts be enlightened, that you may know what is the hope that belongs to his call, what are the riches of glory in his inheritance among the holy ones, and what is the surpassing greatness of his power for us who believe, in accord with the exercise of his great might: which he worked in Christ, raising him from the dead and seating him at his right hand in the heavens, far above every principality, authority, power, and dominion, and every name that is named not only in this age but also in the one to come. And he put all things beneath his feet and gave him as head over all things to the church, which is his body, the fullness of the one who fills all things in every way.

Luke 24:46-53
Jesus said to his disciples: “Thus it is written that the Christ would suffer and rise from the dead on the third day and that repentance, for the forgiveness of sins, would be preached in his name to all the nations, beginning from Jerusalem. You are witnesses of these things. And behold I am sending the promise of my Father upon you; but stay in the city until you are clothed with power from on high.” Then he led them out as far as Bethany, raised his hands, and blessed them. As he blessed them he parted from them and was taken up to heaven. They did him homage and then returned to Jerusalem with great joy, and they were continually in the temple praising God.

“When he had said this, as they were looking on, he was lifted up, and a cloud took him from their sight” (Acts 1:9).

Let’s face it, the more we read about the gospel account of Jesus’ Ascension, the more we are reminded of its resemblance to the good-guy-bad-guy stories of Walt Disney. The bad guys beat up on the good guy; the good guy suffers terrible humiliations and hardships; a magical power from above appears to rescue the good guy and fix up the bad guys; the good guy rises from his demise and literally disappears into the sky in a thousand points of glimmering and swirling lights. What a wonderful ending that makes the child in us happy!

But Walt Disney magics are pure fantasies. In the real world we live in, reason, to the extent that our rational faculties allow us to command, must be the steering wheel that directs our thinking process as we strive to understand the empirical experiences happening all around us. When confronted with the extraordinary phenomenon of the Ascension, as recounted by St. Luke in this Sunday’s 1st and 3rd readings, we must ask: Where is Jesus going? Is he departing into a remote region of the cosmos somewhere? Is his Ascension a journey to a distant star? The scene that ended Jesus’ journey on earth, glorious as it is, remains perplexing and incomprehensible to human reason even after 2000 years. Could the Ascension account be a fabrication of Jesus’ followers, created like a Walt Disney, feel-good fantasy to gloss over the tragic death of their master? Questions such as these must be addressed and put to rest, leaving no excuse for the probing mind’s speculative inclination to fester further.

What we must not lose sight of is that before Jesus’ Ascension, there was his resurrection. As pointed out by Pope Benedict XVI, resurrection brings a whole new dimension of space and physicality that is completely foreign and incomprehensible to us. It’s a state of being not experienced by any human beings until it’s time for our own resurrection when “Many of those who sleep in the dust of the earth shall awake; some shall live forever, others shall be an everlasting horror and disgrace” (Daniel 12:2).

What’s really enlightening about the Gospel accounts of Jesus’ post-resurrection appearances is that they give us a first glimpse, no matter how primitive, of what it’s like to live in a resurrected body, even if the encounters were scantily and poorly illustrated by the witnesses, who understandably were shocked and disoriented, and simply lacked the intuition needed to understand the extraordinary experiences properly. Clearly, the resurrected Christ no longer exists in the spatial dimension of this world: the doors were locked where the disciples gathered, but he was able to enter somehow; and did so suddenly (c.f. John 20:19, 26). The encounters show that the resurrected Christ doesn’t exist the way we do: in one space alongside other spaces. Under normal circumstances, when a physical human body, or any physical body for that matter, rises up, it means the object is vacating from a lower space to enter into a higher space. This is the logic underlying our earlier speculation that maybe Jesus is going up to a distant star. But with the resurrected Christ, who exists in a new dimension of space and physicality, this is not the case at all.

This understanding of the resurrected Christ leads us to conclude that Jesus’ upward movement on Ascension is not his “going away” (again, forget about the “distant star”!), but his “coming” in a new and resurrected state; it’s not a departure, but a new form of closeness and continuing presence. This is evident in the post-Ascension reaction of the apostles, who “worshiped him and returned to Jerusalem with great joy” (Luke 24:52). If Jesus had really departed, shouldn’t they be perplexed and sad instead? Jesus, who has garnered a new dimension of being through resurrection, is now as close to us as ever, if not closer. He now has a divine presence that transcends our spatial dimension, a presence that manifests itself especially in the Eucharist.

No, Jesus’ Ascension doesn’t mean he’s relocating to a distant star. It doesn’t even mean he is leaving us. His upward movement is indicative of “an ontological leap”, to use Pope Benedict XVI’s language, that opens up “a new space of life, a new space of being in union with God”. To borrow a socioeconomic jargon, it’s “upward mobility” in its truest sense! With this understanding of Jesus’ Ascension in mind, we can appreciate better Jesus’ words to the Apostles before his Passion: “I go away and I will come to you” (John 14:28).

(Reference: Jesus of Nazareth – From the Entrance into Jerusalem to the Resurrection, 272-293.)

Ascension of the Lord

Ascension of the Lord

How can we reconcile heaven and earth?

Getting the Facts Straight on the Ascension

Your grief will become joy