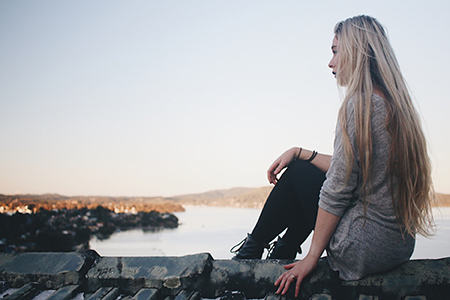 Isaiah 55:6-9
Seek the LORD while he may be found, call him while he is near. Let the scoundrel forsake his way, and the wicked his thoughts; let him turn to the LORD for mercy; to our God, who is generous in forgiving. For my thoughts are not your thoughts, nor are your ways my ways, says the LORD. As high as the heavens are above the earth, so high are my ways above your ways and my thoughts above your thoughts.

Philippians 1:20C-24, 27A
Brothers and sisters: Christ will be magnified in my body, whether by life or by death. For to me life is Christ, and death is gain. If I go on living in the flesh, that means fruitful labor for me. And I do not know which I shall choose. I am caught between the two. I long to depart this life and be with Christ, for that is far better. Yet that I remain in the flesh is more necessary for your benefit. Only, conduct yourselves in a way worthy of the gospel of Christ.

Matthew 20:1-16A
Jesus told his disciples this parable: "The kingdom of heaven is like a landowner who went out at dawn to hire laborers for his vineyard. After agreeing with them for the usual daily wage, he sent them into his vineyard. Going out about nine o'clock, the landowner saw others standing idle in the marketplace, and he said to them, 'You too go into my vineyard, and I will give you what is just.' So they went off. And he went out again around noon, and around three o'clock, and did likewise. Going out about five o'clock, the landowner found others standing around, and said to them, 'Why do you stand here idle all day?' They answered, 'Because no one has hired us.' He said to them, 'You too go into my vineyard.' When it was evening the owner of the vineyard said to his foreman, 'Summon the laborers and give them their pay, beginning with the last and ending with the first.' When those who had started about five o'clock came, each received the usual daily wage. So when the first came, they thought that they would receive more, but each of them also got the usual wage. And on receiving it they grumbled against the landowner, saying, 'These last ones worked only one hour, and you have made them equal to us, who bore the day's burden and the heat.' He said to one of them in reply, 'My friend, I am not cheating you. Did you not agree with me for the usual daily wage? Take what is yours and go. What if I wish to give this last one the same as you? Or am I not free to do as I wish with my own money? Are you envious because I am generous?' Thus, the last will be first, and the first will be last."

Of all the parables of Jesus, I find the parable of the laborers in the vineyard particularly intriguing and thought-provoking. The story never fails to elicit strong reactions from its listeners that include disbelief, protest, or even outright anger. But once properly understood, its reward for those who care to really listen is the consolation of a big “Aha” moment and the priceless satisfaction of seeing the truth more clearly.

A skillful story-teller that Jesus is, he knows just what to say to break the apathy of the human mind so that it’s back into focus and ready for wisdom. To do so sometimes he may say something that seems to defy all logic and generally accepted norms, as is the case in this Sunday’s gospel. How can it be fair for the landowner to pay all laborers in the vineyard the same usual daily wage regardless of how many hours they have worked? People wonder aloud. When they realize that the landowner in the parable refers to God, it triggers in them even more discomfort and resentment: Isn’t God just and righteous? Why does He act like a tyrant who does whatever He pleases? The progression from bewilderment to resentment and then to strong protest can come in quick successions.

The key to understanding this parable is to see the “usual daily wage” not as a monetary compensation for work done, but as God’s grace freely given to save first the people of Israel and later the Gentiles. The fact that God’s saving grace is extended equally to both Israel, who took part in God’s plan of salvation first, and the late-coming Gentiles suggests not unfairness on God’s part, but His generosity and mercy. (Ref: Ignatius Catholic Study Bible commentary on this parable.)

The concept that proves so difficult to grasp for so many people is that God’s grace, i.e. the “usual daily wage” in the parable, is something that cannot be earned. Contrary to human understanding, which is often blinded by our earthly way of life, the kingdom of heaven - the subject matter of this parable - is not a “market place”. Unlike this world, which, due to human limitations, is dominated by consumerism and the principle of buying and selling, the kingdom of heaven is powered by God’s grace alone, which, shocking as it may sound, is not for sale. Neither is grace something that can be bought or earned by mere human efforts (cf. Fr. Richard Rohr, Things Hidden – Scripture as Spirituality, 2008, p. 160).

Now that we know better what grace is, we would appreciate more what the prophet Isaiah said when he proclaimed the magnificent gifts that God would lavish on His people: “All you who are thirsty, come to the water! You who have no money, come, receive grain and eat; come, without paying and without cost, drink wine and milk!” (Is. 55:1)

Shocking, isn’t it? Don’t know about you, but to me the parable is more like a shock therapy for resuscitating our hearts which are totally numb, or a powerful stimulant for rejuvenating our brains which are all but dead. No, I’m not talking about magic. I’m talking about Jesus, the master story-teller, who knows exactly what to say to revive us from apparent death.

Jesus’ uplifting presence in the Gospels

Be steadfast in our faith

Live not in your grave