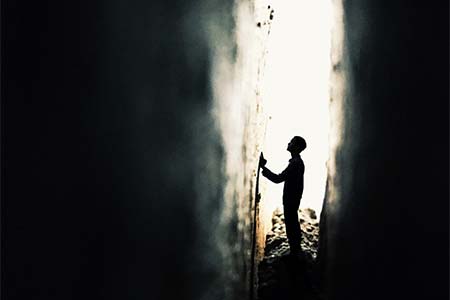 Acts 2:42-47
They devoted themselves to the teaching of the apostles and to the communal life, to the breaking of bread and to the prayers. Awe came upon everyone, and many wonders and signs were done through the apostles. All who believed were together and had all things in common; they would sell their property and possessions and divide them among all according to each one's need. Every day they devoted themselves to meeting together in the temple area and to breaking bread in their homes. They ate their meals with exultation and sincerity of heart, praising God and enjoying favor with all the people. And every day the Lord added to their number those who were being saved.

1 Peter 1:3-9
Blessed be the God and Father of our Lord Jesus Christ, who in his great mercy gave us a new birth to a living hope through the resurrection of Jesus Christ from the dead, to an inheritance that is imperishable, undefiled, and unfading, kept in heaven for you who by the power of God are safeguarded through faith, to a salvation that is ready to be revealed in the final time. In this you rejoice, although now for a little while you may have to suffer through various trials, so that the genuineness of your faith, more precious than gold that is perishable even though tested by fire, may prove to be for praise, glory, and honor at the revelation of Jesus Christ. Although you have not seen him you love him; even though you do not see him now yet believe in him, you rejoice with an indescribable and glorious joy, as you attain the goal of your faith, the salvation of your souls.

John 20:19-31
On the evening of that first day of the week, when the doors were locked, where the disciples were, for fear of the Jews, Jesus came and stood in their midst and said to them, "Peace be with you." When he had said this, he showed them his hands and his side. The disciples rejoiced when they saw the Lord. Jesus said to them again, "Peace be with you. As the Father has sent me, so I send you." And when he had said this, he breathed on them and said to them, "Receive the Holy Spirit. Whose sins you forgive are forgiven them, and whose sins you retain are retained." Thomas, called Didymus, one of the Twelve, was not with them when Jesus came. So the other disciples said to him, "We have seen the Lord." But he said to them, "Unless I see the mark of the nails in his hands and put my finger into the nailmarks and put my hand into his side, I will not believe." Now a week later his disciples were again inside and Thomas was with them. Jesus came, although the doors were locked, and stood in their midst and said, "Peace be with you." Then he said to Thomas, "Put your finger here and see my hands, and bring your hand and put it into my side, and do not be unbelieving, but believe." Thomas answered and said to him, "My Lord and my God!" Jesus said to him, "Have you come to believe because you have seen me? Blessed are those who have not seen and have believed." Now, Jesus did many other signs in the presence of his disciples that are not written in this book. But these are written that you may come to believe that Jesus is the Christ, the Son of God, and that through this belief you may have life in his name.

The horrific images are still fresh in everyone's mind: on this Palm Sunday, two Coptic church bombings took place in Tanta and Alexandria, Egypt, killing 44 innocent people and injuring more than 100. Only 4 months before, on December 11, 2016, a similar suicide bombing of another Coptic church in Cairo had killed 29 people and injured 45 others.

People have become so accustomed to evils, perhaps this is no longer considered news anymore: in a special report this month, the National Post revealed the biased ideologies of the administration of a university in Ontario that labeled the activities of pro-life groups as “adversarial”, “confrontational”, and “anti-choice”.

Nowadays, moral relativism is running rampant in schools, media, businesses, and all levels of government. Everyone is entitled to uphold their own truths, so it's claimed. Those who insist the truths in which they believe are absolute and universally applicable, as do the Catholic Church and many religions, are considered “intolerant”.

Compared to the early day Christians, for whom denigration, repression and persecution were the daily norms, it's no exaggeration to say that today's Christians are not faring any better. What messages did the early Church give her faithful to help them deal with their adversities at hand? Many. And most of them are still useful for us considering the similarity between the early Church's difficult experiences and ours. But here's one from this Sunday's lectionary readings that is particularly useful:

“In this you rejoice, although now for a little while you may have to suffer through various trials so that the genuineness of your faith, more precious than gold that is perishable even though tested by fire, may prove to be for praise, glory, and honor at the revelation of Jesus Christ.” (1 Peter 1:6-7)

We are living in unprecedented times - hopefully not the end of time. After many years of tensions and crises in Iraq and Syria, which have spilled over to the European continent and Asia Minor in many forms of terrorism and rogue invasions, the western countries and the Russian camp, which includes Assad of Syria and Iran, have come to a head over Assad's chemical warfare, with both sides issuing ultimatums to each other and taking belligerent positions that are difficult to back down. A similar - if not more intense and dangerous - situation has also been developing in the west Pacific where North Korea is threating to “nuke” South Korea, Japan, and the U.S. mainland should the U.S. decide to bomb its nuclear facilities.

The Bible is filled with vivid predictions of the horrific hardships that the world will experience on the Last Day. Many of them bring to mind horrors that may well become a reality should a nuclear war break out due to one single miscalculated threat or human error in the Korean peninsula or in the Middle East. For whatever reason, stuck in my head are two very graphic descriptions in the Book of Revelation:

“Then I watched while he broke open the sixth seal, and there was a great earthquake; the sun turned as black as dark sackcloth and the whole moon became like blood. The stars in the sky fell to the earth…the sky was divided like a torn scroll curling up, and every mountain and island was moved from its place…They cried out to the mountains and the rocks, ‘Fall on us and hide us from the face of the one who sits on the throne and from the wrath of the Lamb, because the great day of their wrath has come and who can withstand it?'" (Revelation 6:12-17)

“During that time these people will seek death but will not find it, and they will long to die but death will escape them.” (Revelation 9:6)

As Jesus said to Thomas in the gospel reading: “Blessed are those who have not seen and have believed” (John 20:29). In a way, we see Jesus too: not in the manner Thomas encountered him, but in the word of God and the Eucharist. These indeed are unprecedented times that we live in. They may well be the precursors to the Last Day although we hope and pray that trust and peace would somehow prevail. But what are we to fear if Jesus is there with us in Peter's boat, accompanying us to weather the storm (cf. Matthew 8:23-27)? “Thus we do not fear, though earth be shaken and mountains quake to the depths of the sea, though its waters rage and foam and mountains totter at its surging, the LORD of hosts is with us; our stronghold is the God of Jacob” (Psalm 46:3-4). Let's hang in there and accept our various trials as a test of “the genuineness of your faith” (1 Peter. 1:7).

Stay awake, be prepared! Watch and be ready！

The Jitters of the Last Day

Are we approaching the end of time?