Madness or Love? It’s all in the Eyes of the Beholder 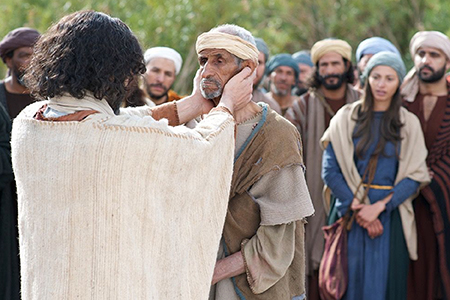 Job 7:1-4,6-7
Job spoke, saying: Is not man's life on earth a drudgery? Are not his days those of hirelings? He is a slave who longs for the shade, a hireling who waits for his wages. So I have been assigned months of misery, and troubled nights have been allotted to me. If in bed I say, "When shall I arise?" then the night drags on; I am filled with restlessness until the dawn. My days are swifter than a weaver's shuttle; they come to an end without hope. Remember that my life is like the wind; I shall not see happiness again.

1 Corinthians 9:16-19, 22-23
Brothers and sisters: If I preach the gospel, this is no reason for me to boast, for an obligation has been imposed on me, and woe to me if I do not preach it! If I do so willingly, I have a recompense, but if unwillingly, then I have been entrusted with a stewardship. What then is my recompense? That, when I preach, I offer the gospel free of charge so as not to make full use of my right in the gospel. Although I am free in regard to all, I have made myself a slave to all so as to win over as many as possible. To the weak I became weak, to win over the weak. I have become all things to all, to save at least some. All this I do for the sake of the gospel, so that I too may have a share in it.

Mark 1:29-39
On leaving the synagogue Jesus entered the house of Simon and Andrew with James and John. Simon's mother-in-law lay sick with a fever. They immediately told him about her. He approached, grasped her hand, and helped her up. Then the fever left her and she waited on them. When it was evening, after sunset, they brought to him all who were ill or possessed by demons. The whole town was gathered at the door. He cured many who were sick with various diseases, and he drove out many demons, not permitting them to speak because they knew him. Rising very early before dawn, he left and went off to a deserted place, where he prayed. Simon and those who were with him pursued him and on finding him said, "Everyone is looking for you." He told them, "Let us go on to the nearby villages that I may preach there also. For this purpose have I come." So he went into their synagogues, preaching and driving out demons throughout the whole of Galilee.

A friend of mine has a rather unusual position on the issue of parenthood. In his view, the world we live in is full of sorrows and tribulations. He thinks bringing innocent children into this world of toils and snares is both unfair and cruel because you are effectively making them suffer against their will; which is also why he and his wife have decided against having children. His view is unusual but not uncommon these days in a world captivated by the culture of death. Obviously, this is not what the Church teaches. The Church has always encouraged parenthood. It’s considered the culmination of the married couple’s expression of love, which gives rise to a selfless and generous participation in the creative work of God (CCC1652).

My friend’s pessimistic life view will find resonance in Job’s words in this Sunday’s first reading. “Is not man’s life on earth a drudgery? Are not his days those of hirelings?”, Job asks as he struggles to understand the sudden onslaught of misfortunes that have left his life in tatters and complete disarray (Job 7:1). Abandoned and mocked by his friends - even by his wife - Job begins to see life as a “drudgery”; a futile and meaningless exercise that one must grudgingly put up with. This is a very dark mindset that often drives people desperate for a way out to end their own life or, in my friend’s case, avoid starting a new one. In fact, ending his life is exactly what Job is counseled to do. “Curse God and die”, his wife yells at him in disgust (Job 2:9).

A suicidal mind is, of course, not what the Bible wants from us. After many difficult struggles; heated arguments with friends, who openly question his claim of innocence; and serious intellectual reflections that include a heart-to-heart discussion with God, Job finally regains his trust in God. In the end, he is convinced that God is always in control in spite of the inexplicable personal misfortunate that befell him; and that God, in His unfathomable wisdom and omnipotence, has a plan that is simply too profound for the human mind to fully comprehend.

God’s plan certainly is difficult to comprehend, but Job’s decision to continue to trust God in spite of personal sufferings and devastations is not any easier to understand for many people. It takes faith and humility. When I first read Job while taking a university course on Medieval Philosophy, I hastily wrote the book off as “blind faith”. As a young and aspiring “philosopher”, I considered it an affront to my rational mind. But what goes around comes around. So many years later – now that I’m done studying, done raising children, done pursuing a career, done admiring the philosophers, done ridiculing the Bible – I find myself embracing Job’s position unreservedly. I honestly believe that of all the explanations and solutions put forward by all the great thinkers, philosophers and theologians alike on the issue of suffering, Job’s is the only sensible one.

What have changed? Just one thing really: my heart. Where the person gloriously enthroned in there used to be me, now it is Jesus - him and only him, front and center, unreserved and all-consuming. That’s it? That’s it. The change didn’t come easy. But when it did, repentance followed; so did faith and humility and a rush for action to proclaim the unspeakable joy of knowing Christ. The experience was just overwhelming, consuming my whole being, pushing me hard to make up for lost time.

The urge was irresistible - almost panicky. It was a powerful awakening that “cut to the heart” (Acts 2:37). Like the three thousand who heard Peter’s gospel message and received baptism on Pentecost, the urgency just dawned on you powerfully. As though your life depended on it, you blurted out loud desperately: “What are we to do?” (Acts 2:37). No one can express the urgency I experienced better than Paul when he says in this Sunday’s 2nd reading, “If I preach the gospel, this is no reason for me to boast, for an obligation has been imposed on me, and woe to me if I do not preach it!” (1 Cor 9:16); and again elsewhere, “For the love of Christ compels us” (2 Cor 5:14).

For many people, Paul and people like Job should simply be written off as madness. Festus, the Roman governor, was one of them. "You are mad, Paul; much learning is driving you mad", he shouted after hearing Paul’s spiritual conversion story and his defense against the charges made by the Jews (Acts 26:24). Call him a madman, a weirdo, or anything you want; the reality is, the fire in Paul’s heart, ignited by the Spirit, is something people of this world won’t understand, unless they are prepared to welcome the same Spirit into their hearts.

People call what they don’t understand “madness”. For them, Jesus who preaches in the synagogues and performs healings tirelessly in various villages in this Sunday’s gospel may well be just another madman rejected by the world – one who “came to his own home, and his own people received him not” (John 1:11). For my friend, parenthood may well be just another form of madness. But if faith in God, proclaiming the gospel, and promoting the culture of life are the different forms of madness; madness is what we must choose.