Mountain Symbolism in the Bible 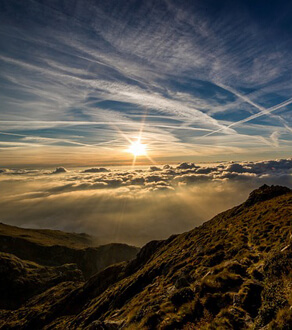 Genesis 15:5-12,17-18
The Lord God took Abram outside and said, “Look up at the sky and count the stars, if you can. Just so,” he added, “shall your descendants be.” Abram put his faith in the LORD, who credited it to him as an act of righteousness. He then said to him, “I am the LORD who brought you from Ur of the Chaldeans to give you this land as a possession.” “O Lord GOD,” he asked, “how am I to know that I shall possess it?” He answered him, “Bring me a three-year-old heifer, a three-year-old she-goat, a three-year-old ram, a turtledove, and a young pigeon.” Abram brought him all these, split them in two, and placed each half opposite the other; but the birds he did not cut up. Birds of prey swooped down on the carcasses, but Abram stayed with them. As the sun was about to set, a trance fell upon Abram, and a deep, terrifying darkness enveloped him. When the sun had set and it was dark, there appeared a smoking fire pot and a flaming torch, which passed between those pieces. It was on that occasion that the LORD made a covenant with Abram, saying: “To your descendants I give this land, from the Wadi of Egypt to the Great River, the Euphrates.”

Philippians 3:17-4:1
Join with others in being imitators of me, brothers and sisters, and observe those who thus conduct themselves according to the model you have in us. For many, as I have often told you and now tell you even in tears, conduct themselves as enemies of the cross of Christ. Their end is destruction. Their God is their stomach; their glory is in their “shame.” Their minds are occupied with earthly things. But our citizenship is in heaven, and from it we also await a savior, the Lord Jesus Christ. He will change our lowly body to conform with his glorified body by the power that enables him also to bring all things into subjection to himself. Therefore, my brothers and sisters, whom I love and long for, my joy and crown, in this way stand firm in the Lord.

Luke 9:28B-36
Jesus took Peter, John, and James and went up the mountain to pray. While he was praying his face changed in appearance and his clothing became dazzling white. And behold, two men were conversing with him, Moses and Elijah, who appeared in glory and spoke of his exodus that he was going to accomplish in Jerusalem. Peter and his companions had been overcome by sleep, but becoming fully awake, they saw his glory and the two men standing with him. As they were about to part from him, Peter said to Jesus, “Master, it is good that we are here; let us make three tents, one for you, one for Moses, and one for Elijah.” But he did not know what he was saying. While he was still speaking, a cloud came and cast a shadow over them, and they became frightened when they entered the cloud. Then from the cloud came a voice that said, “This is my chosen Son; listen to him.” After the voice had spoken, Jesus was found alone. They fell silent and did not at that time tell anyone what they had seen.

Born a resident of Tsuen Wan, Hong Kong, I grew up admiring the Tai Mo Shan, which held our small rural town in its broad embrace like a giant. What is it like to stand atop the mountain and take in the panoramic view of the low-lying town, its farmlands, its harbor, the nearby islands and the ocean beyond? Wouldn’t it be nice to be able to let go of the burdens of school work and roam wild in the woods of the mountain? What’s hidden underneath the clouds that cover its summit all year round? Does God live there?

Those were my daydreams, a rural town boy sitting in the classroom of Tsuen Wan Government Primary School, looking out its windows to the awe-inspiring Tai Mo Shan….

The mountain is a special place in the Bible. No serious reader can afford to overlook the significance of mountain symbolism in the Bible: it’s a place of ascent; it’s a liberation from the burden of life; its majestic height enables us to see wider and farther; it connects us to the Sacred and Divine and puts us in touch with the Creator.

It is, therefore, no coincidence that so many important moments of Jesus’ life took place in the setting of the mountain: the temptation, the Sermon on the Mount, the Transfiguration in today’s gospel reading, his agony on Mount Olive, the Crucifixion, and his Ascension.

Looking further into the Old Testament, there were the Old Testament mountains of revelation: Mount Moriah, where Abraham sacrificed Isaac and later King Solomon built the Jerusalem Temple; Mount Sinai where the Decalogue was proclaimed to, and a covenant made with, Israel; Mount Horeb, where God revealed Himself to the prophet Elijah following “strong and heavy wind”, “an earthquake”, “fire” and “a tiny whispering sound” (1Kings 19:11-12).

The mountains of the Bible were remote and yet they formed the backdrops for the close encounters between God and men; unreachable and yet they comprised the settings in which God’s words and ordinances were made within human reach; hidden and hard to find and yet it’s in their lofty heights and sacred spaces that God revealed Himself to those who sought Him.