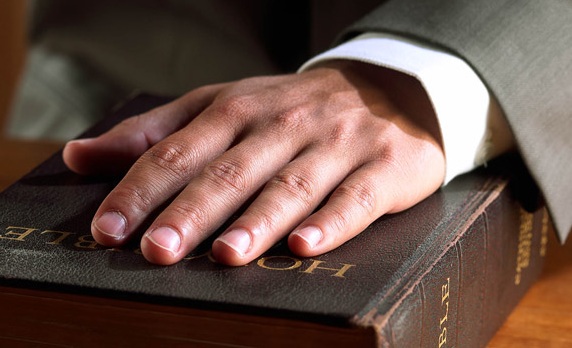 The Lord has taught to abstain from injuring our neighbor, forbidding anger with murder, lust with adultery, and the putting away a wife with a bill of divorce. He now proceeds to teach to abstain from injury to God, forbidding not only perjury as an evil in itself but even all oaths as the cause of evil, saying: "You have heard it said by them of old, You shall not forswear yourself". It is written in Leviticus, You shall not forswear yourself in My name (Lev 19:12); and that they should not make gods of creatures, they are commanded to render to God their oaths, and not to swear by any creature, "Render to the Lord your oaths"; that is, if you shall have occasion to swear, you shall swear by the Creator and not by the creature. As it is written in Deuteronomy 6:13, "You shall fear the LORD your God; you shall serve him, and swear by his name."

This was allowed under the Law, as to children; as they offered sacrifice to God, that they might not do it to idols, so they were permitted to swear by God; not that the thing was right, but that it were better done to God than to demons. Consider that the Savior does not here forbid to swear by God, but by the Heaven, the Earth, by Jerusalem, by a man's head. For this evil practice of swearing by the elements the Jews had always, and are thereof often accused in the prophetic writings. For he who swears, shows either reverence or love for that by which he swears. Thus when the Jews swore by the Angels, by the city of Jerusalem, by the temple and the elements, they paid to the creature the honor and worship belonging to God; for it is commanded in the Law that we should not swear but by the Lord our God. Then note how Jesus exalts the elements of the world, not from their own nature, but from the respect which they have to God, so that there is opened no occasion of idolatry. Those who live in the simplicity of the faith have not need to swear, with them ever, what is is, what is not is not; by this their life and their conversation are ever preserved in truth.

commandments
Sermon on the Mount