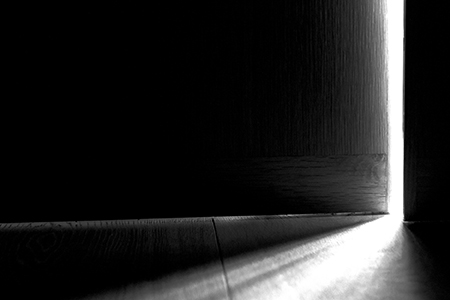 Second Sunday of Easter (or Sunday of Divine Mercy)

Acts 5:12-16
Many signs and wonders were done among the people at the hands of the apostles. They were all together in Solomon’s portico. None of the others dared to join them, but the people esteemed them. Yet more than ever, believers in the Lord, great numbers of men and women, were added to them. Thus they even carried the sick out into the streets and laid them on cots and mats so that when Peter came by, at least his shadow might fall on one or another of them. A large number of people from the towns in the vicinity of Jerusalem also gathered, bringing the sick and those disturbed by unclean spirits, and they were all cured.

Revelation 1:9-11A, 12-13, 17-19
I, John, your brother, who share with you the distress, the kingdom, and the endurance we have in Jesus, found myself on the island called Patmos because I proclaimed God’s word and gave testimony to Jesus. I was caught up in spirit on the Lord’s day and heard behind me a voice as loud as a trumpet, which said, “Write on a scroll what you see.” Then I turned to see whose voice it was that spoke to me, and when I turned, I saw seven gold lampstands and in the midst of the lampstands one like a son of man, wearing an ankle-length robe, with a gold sash around his chest. When I caught sight of him, I fell down at his feet as though dead. He touched me with his right hand and said, “Do not be afraid. I am the first and the last, the one who lives. Once I was dead, but now I am alive forever and ever. I hold the keys to death and the netherworld. Write down, therefore, what you have seen, and what is happening, and what will happen afterwards.”

John 20:19-31
On the evening of that first day of the week, when the doors were locked, where the disciples were, for fear of the Jews, Jesus came and stood in their midst and said to them, “Peace be with you.” When he had said this, he showed them his hands and his side. The disciples rejoiced when they saw the Lord. Jesus said to them again, “Peace be with you. As the Father has sent me, so I send you.” And when he had said this, he breathed on them and said to them, “Receive the Holy Spirit. Whose sins you forgive are forgiven them, and whose sins you retain are retained.” Thomas, called Didymus, one of the Twelve, was not with them when Jesus came. So the other disciples said to him, “We have seen the Lord.” But he said to them, “Unless I see the mark of the nails in his hands and put my finger into the nailmarks and put my hand into his side, I will not believe.” Now a week later his disciples were again inside and Thomas was with them. Jesus came, although the doors were locked, and stood in their midst and said, “Peace be with you.” Then he said to Thomas, “Put your finger here and see my hands, and bring your hand and put it into my side, and do not be unbelieving, but believe.” Thomas answered and said to him, “My Lord and my God!” Jesus said to him, “Have you come to believe because you have seen me? Blessed are those who have not seen and have believed.” Now Jesus did many other signs in the presence of his disciples that are not written in this book. But these are written that you may come to believe that Jesus is the Christ, the Son of God, and that through this belief you may have life in his name.

How do we put this Sunday’s readings all in a nut shell? In my view, these are the best three words that sum up the three readings: signs, wonders, and visions. Signs, wonders, and visions are what we see in three very different scenes: a church community at Pentecost (reading 1), an apocalyptic vision on the island of Patmos (reading 2), a resurrected Christ after Easter (gospel). Tracing through all three readings and connecting all the dots to make the portrayed events coherent and meaningful is one common denominator – the Holy Spirit.

After many years of governing and political domination by various foreign powers, Israel’s hopes of restoring the glory days of the Davidic kingdom, fueled by predictions and promises of the prophets, had never been greater. Entered Jesus into this politically charged arena or, shall we say, “hot soup” that were the lands of Judea, Samaria, and Galilea. Understandably, people surrounding him, especially his disciples, would see him as the promised Messiah whose mission was to “restore the kingdom to Israel” (Acts 1:6). What we see in reading one are “signs and wonders…done among the people” by the apostles after the Holy Spirit had descended on them in a special way at Pentecost (Acts 5:12). The Jewish hopes for restoration were finally fulfilled, albeit in a very unexpected manner: The Church of 12 apostles was the new Israel, the Kingdom of God, that restored and surpassed the Israel of 12 tribes; Jesus, the Son of David, was the “King of kings and Lord of lords” who would reign forever and ever (Rev 17:14).

In the second reading, a vision came to John when he was in exile to Patmos, an island about forty miles from Ephesus. What he saw was the heavenly liturgy being celebrated by the eternal High Priest, Jesus, “wearing an ankle-length robe, with a gold sash around his chest” in the midst of “seven gold lampstands” (Rev 1:1-12). From that vision many other intriguing visions unfolded which John meticulously laid out in 22 chapters in the Book of Revelation. What enabled John to see such visions? He “was caught up in spirit on the Lord’s day” (Rev 1:10).

Following the political “hot soup” of Acts and the salads of many visions of John’s Revelation, the main course served up by the pneumatic menu of the second Sunday of Easter is Jesus appearing to twelve apostles, minus St. Thomas, in his resurrected body. Jesus “breathed on” the apostles and said, "Receive the Holy Spirit. Whose sins you forgive are forgiven them, and whose sins you retain are retained" (John 20:22-23). The word “breathed” or “emphysao” (GK) that John uses is the same word used by the authors of Genesis and Ezekiel where God breathed the breath of life into the first man (Gen 2:7) and the slain in the valley of bones came alive when the Spirit breathed on them (Eze 37:9). Like the two events in Genesis and Ezekiel, the post-Easter event depicted by John is of great significance. What Jesus gave them, through the empowerment of the Holy Spirit, was the authority to bind and forgive our sins in the name of God (see T. Lane, The Catholic Priesthood, p.116).