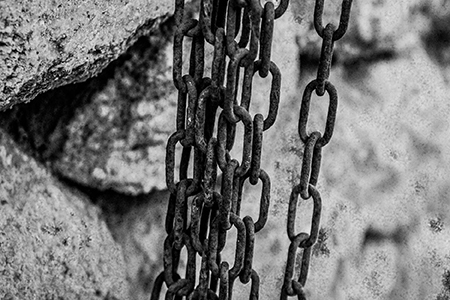 No matter how abhorrent we feel about the practice of slavery, it had been an unfortunate characteristic of civilization, and an acceptable social norm in many societies of the ancient world. Israel, from her historical experience in Egypt and her situation under the rule of the Romans, knows too well about slavery. So what does Jesus drive at, in today's Gospel reading, when He states the inhuman condition of a slave/servant by way of parable? Does He condone their treatment?

To begin, Jesus speaks, naturally, within the framework of His time regarding slavery. He simply states the fact of a slave's duty. Yet, the punch line is “so should it be with you” (Lk 17:10). All of a sudden, we, as a sympathetic and perhaps furious onlooker of the unjust treatment of the slave, are asked by Jesus to turn ourselves into the slave! Not only does He not condemn slavery, it seems that He asks us to accept and be subjected to slavery. Does God deal with us as His slaves? Does God delight in humiliating us?

First, we must remember that God makes us in His likeness (rf Gn 1:26-27); the psalmist in Psalm 8 is fully thankful for God's love, “You have made [man] little less than gods, and crowned him with glory and honor. You have given him rule over the works of your hands, putting all things under his feet” (Ps 8:6-7). Second, He sent His only Son to die for us, to free us from the slavery of sin, to raise us to the status of adopted children and heirs of eternal life with Him (rf Rom 8:7, Gal 4:7, Ti 3:7).

So what Jesus says is merely about the attitude of servitude. He reminds us that we have nothing to boast of before God. We must see where we stand before Him; that we are creatures, and if we delight in and be proud of anything in ourselves, it is primarily because of God's grace. We depend on God for everything and have no right to claim a wage, no entitlement to anything. Once we have acknowledged that we are “unprofitable servants”, then we see that God really has high regard for our lowliness. In another parable, Jesus reverses the role of the master and his servant (rf Lk 12:37). At the Last Supper, this parable became reality in Jesus who washed His disciples' feet, and Jesus, the Lord and Master, dies the death of a slave on the cross to release us from the slavery of Sin and Death (rf Jn 13:4-5).

Though to us, slavery seems to be a thing in the past, yet throughout history, humankind is far from being freed in the sense that, we are all under spiritual slavery. Enslaved by pride, selfishness, greed and lust, the world idolized self-reliance and self-achievement. Dependence and humility are not welcoming words, let alone servitude. But when the attitude of servitude becomes part of our daily practice as Jesus would like us to do, it fosters gratitude to our Creator and blessings and peace will begin to enter our lives.

Yes, slavery is bad, but spiritual slavery is even worse for it seeps through gradually, grows imperceptibly and takes root unreservedly.