Suffering is “The Kiss of Jesus” 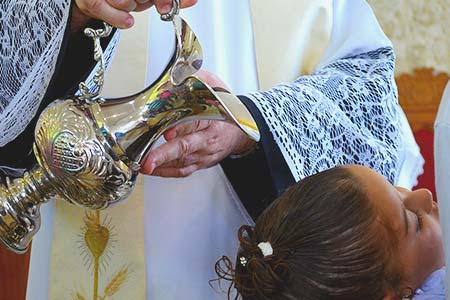 Acts 2:14A, 36-41
Then Peter stood up with the Eleven, raised his voice, and proclaimed: "Let the whole house of Israel know for certain that God has made both Lord and Christ, this Jesus whom you crucified." Now when they heard this, they were cut to the heart, and they asked Peter and the other apostles, "What are we to do, my brothers?" Peter said to them, "Repent and be baptized, every one of you, in the name of Jesus Christ for the forgiveness of your sins; and you will receive the gift of the Holy Spirit. For the promise is made to you and to your children and to all those far off, whomever the Lord our God will call." He testified with many other arguments, and was exhorting them, "Save yourselves from this corrupt generation." Those who accepted his message were baptized, and about three thousand persons were added that day.

1 Peter 2:20B-25
Beloved: If you are patient when you suffer for doing what is good, this is a grace before God. For to this you have been called, because Christ also suffered for you, leaving you an example that you should follow in his footsteps. He committed no sin, and no deceit was found in his mouth. When he was insulted, he returned no insult; when he suffered, he did not threaten; instead, he handed himself over to the one who judges justly. He himself bore our sins in his body upon the cross, so that, free from sin, we might live for righteousness. By his wounds you have been healed. For you had gone astray like sheep, but you have now returned to the shepherd and guardian of your souls.

John 10:1-10
Jesus said: "Amen, amen, I say to you, whoever does not enter a sheepfold through the gate but climbs over elsewhere is a thief and a robber. But whoever enters through the gate is the shepherd of the sheep. The gatekeeper opens it for him, and the sheep hear his voice, as the shepherd calls his own sheep by name and leads them out. When he has driven out all his own, he walks ahead of them, and the sheep follow him, because they recognize his voice. But they will not follow a stranger; they will run away from him, because they do not recognize the voice of strangers." Although Jesus used this figure of speech, the Pharisees did not realize what he was trying to tell them. So Jesus said again, "Amen, amen, I say to you, I am the gate for the sheep. All who came before me are thieves and robbers, but the sheep did not listen to them. I am the gate. Whoever enters through me will be saved, and will come in and go out and find pasture. A thief comes only to steal and slaughter and destroy; I came so that they might have life and have it more abundantly."

The morning after he was temporarily released from prison on bail, the former Hong Kong Chief Executive, Donald Tsang Yam-Kuen, headed straight to church to attend morning Mass – together with an entourage of plain-clothes police bodyguards.

Let's be clear: This is not the place to debate whether Tsang has been given a fair trial or whether he governed well while in power; nor are we interested in supporting or criticizing him as we reflect on the Mass readings of the 4th Sunday of Easter. Rather, the news about the former leader of Hong Kong is brought up because we see in it a very significant theological issue: After such a long period of suffering, after so many prayers have seemingly gone unanswered, and after so many lost political and legal battles, public humiliations and his eventual fall from grace, why is Tsang still faithful to God? Why doesn't he abandon his faith when God appears to have abandoned him so many times already? To think about it, the question is a universal one - applicable not only to Tsang but also to all believers who suffer. And let's face it, who doesn't?

While it isn't the intention of this Sunday's Mass readings to give us a complete theological treatise on the problem of suffering, St. Peter, whose powerful proclamation of the gospel in the first reading has convinced “about three thousand persons” to repent and receive baptism (Acts 2:41), gives us an insightful exhortation in the second reading that enables us to understand why so many Christians like Tsang continue to trust God even when they can barely keep their heads above water. According to St. Peter, suffering for doing what is good is a grace before God (cf. 1 Pt 2:20). “For to this you have been called, because Christ also suffered for you,” he concludes (1 Pt. 2:21). Suffering for righteousness, in other words, is courageously embraced by Christians as a personal conviction – a noble calling to follow what Christ has done for all of us. There is a loftiness to suffering for the kingdom of God that is somehow empowering and sustaining, giving a faithful Christian the determination to accept any adversity – a resolve that borders on martyrdom.

Interestingly, Mother Teresa, who lived a life of extreme poverty and for whom suffering appeared to know no bounds, also viewed suffering as “the kiss of Jesus”; to her it was “a gift from God” (M. Gaitley, 33 Days to Morning Glory, p.69).

If such a realization sounds less than comforting – after all, nobody likes suffering – the gospel reading of this Sunday gives us the assurance that Jesus is our shepherd and we are his sheep; we shall fear no harm when he is at our side (cf. Ps. 23:4).