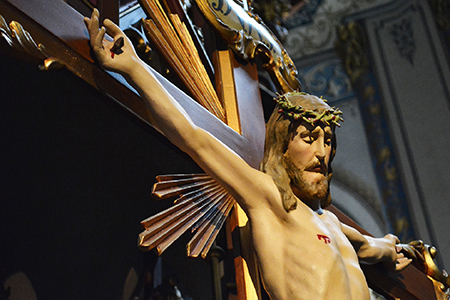 Isaiah 50:5 - 9A
The Lord GOD opens my ear that I may hear; and I have not rebelled, have not turned back. I gave my back to those who beat me, my cheeks to those who plucked my beard; my face I did not shield from buffets and spitting. The Lord GOD is my help, therefore I am not disgraced; I have set my face like flint,knowing that I shall not be put to shame. He is near who upholds my right; if anyone wishes to oppose me, let us appear together.Who disputes my right? Let that man confront me. See, the Lord GOD is my help; who will prove me wrong?

James 2:14 - 18
What good is it, my brothers and sisters, if someone says he has faith but does not have works? Can that faith save him? If a brother or sister has nothing to wear and has no food for the day, and one of you says to them, “Go in peace, keep warm, and eat well, ” but you do not give them the necessities of the body, what good is it? So also faith of itself, if it does not have works, is dead. Indeed someone might say, “You have faith and I have works.” Demonstrate your faith to me without works, and I will demonstrate my faith to you from my works.

Mark 8:27 - 35
Jesus and his disciples set out for the villages of Caesarea Philippi. Along the way he asked his disciples, “Who do people say that I am?” They said in reply, “John the Baptist, others Elijah, still others one of the prophets.” And he asked them, “But who do you say that I am?” Peter said to him in reply, “You are the Christ.” Then he warned them not to tell anyone about him. He began to teach them that the Son of Man must suffer greatly and be rejected by the elders, the chief priests, and the scribes, and be killed, and rise after three days. He spoke this openly. Then Peter took him aside and began to rebuke him. At this he turned around and, looking at his disciples, rebuked Peter and said, “Get behind me, Satan. You are thinking not as God does, but as human beings do.” He summoned the crowd with his disciples and said to them, “Whoever wishes to come after me must deny himself, take up his cross, and follow me. For whoever wishes to save his life will lose it, but whoever loses his life for my sake and that of the gospel will save it.”

14 years ago, two busloads of pilgrims from the Chinese Martyrs Catholic Church toured the Holy Land under the spiritual supervision of their pastor, Fr. Peter Leung. My wife and I had the blessing of joining the pilgrimage which included many well-known places in the Holy Land. Over the years, we had come to know these places very well through the Bible. Now, for the first time, we were able to actually set foot on them and saw them with our own eyes. The experience was one of great joy and incredulity! From the moment we exited from Tel Aviv’s Ben Gurion Airport, I had felt as though I was walking on cloud #9. It was hard to believe that this sacred land that we were touring had once been graced by the presence of our Lord himself; and that it was here in this ancient land along the Mediterranean coast that saintly biblical figures like Mary, the apostles, John the Baptist, Isaiah, Elijah, David, Moses, Abraham, etc. had once walked and breathed

Our tour went as far north as the Sea of Galilee and the nearby cities before heading south to Jerusalem. (Remember Capernaum? Does Tiberias ring a bell? Who can possibly forget Cana?!) It stopped short of taking us further north to Caesarea Philippi, the city that forms the backdrop of this Sunday’s gospel. According to Mark, it’s in Caesarea Philippi that Peter, whose original name is Simon, makes his famous confession to Jesus, recognizing him as “the Christ” or “Christos” in Greek, which means “the Anointed One”.

The Matthean account of the same episode offers an added perspective that brings to light Jesus’ response to Peter’s “Christos” confession: he names him “Petros” (Gk) or “Peter”, which means “rock”; promising to build his church “upon this rock”. He also gives Peter “the keys to the kingdom of heaven”, signifying Peter’s new role as his successor on earth. He is the kingdom’s chief teacher and administrator with the authority to bind and loose, which means unbridled teaching authority and the ability to render binding decisions (see Ignatius Catholic Study Bible – New Testament, Matthew 16:18-19).

As important as the Matthean story is, the Church wants us to focus on the issue of suffering on this Sunday. This explains why the corresponding first reading for this Sunday is the 3rd “Servant song” of Isaiah. (The other 3 Servant songs of Isaiah are: Isaiah 42:1-9, 49:1-6, 52:12-53:12.) In connection with the gospel motif of suffering, the 3rd Servant song of Isaiah gives us the powerful example of the “suffering servant”, which Christians have identified with Jesus. Similarly, the psalm that follows is a thanksgiving psalm written by someone who has recovered from a serious illness. It echoes the trust in God expressed by Isaiah in the 3rd Servant song: “The Lord GOD is my help, therefore I am not disgraced” (Isaiah 50:7).

It’s no exaggeration to say that suffering anchors the whole Christian faith. The whole economy of salvation is built on the suffering of one person, our Lord Jesus Christ. His redemptive self-offering on the cross and subsequent resurrection are the reasons why humanity can live in hope, trusting that Christ has already overpowered sin and death, and that through him we can also do the same. His is the ultimate offering to which all offerings in the Old Testament point and anticipate: from Abel’s offering of “one of the best firstlings of his flock”; to the bread and wine offering of the first priest that appears in the Bible, Melchizedek; to Abraham’s offering of his only son, Isaac; to many years of offering of the Pascal lamb in the Jerusalem temple (Gen 4:4, 14:18, Gen 22:1-14). As a result, faithful Christians view the various trials in the light of God’s cosmic plan and consider them “all joy” (James 1:2). Following Christ, we must confront them with perseverance, trusting that our steadfastness and faith in God will enable us to reach spiritual maturity and human perfection.

Unfortunately, this core Christian teaching of suffering is also the least understood teaching, not only by many of us feeble believers but also by our first Pope, Peter (granted that it happened before the Pentecost, which made every disciple a new person)! Now we understand why Jesus, who has just made Peter his vicar on earth and granted him the authority to bind and lose in his kingdom, minces no words in rebuking Peter immediately: “Get behind me, Satan. You are thinking not as God does, but as human beings do” (Mk. 8:33). The next time we are confounded by the human fear of suffering, will we choose to follow James’ advice to persevere for spiritual maturity? Or, will we adopt the mindset of the pre-Pentecost Peter and refuse to accept suffering: "God forbid, Lord! No such thing shall ever happen to you" (Mt 16:22)?