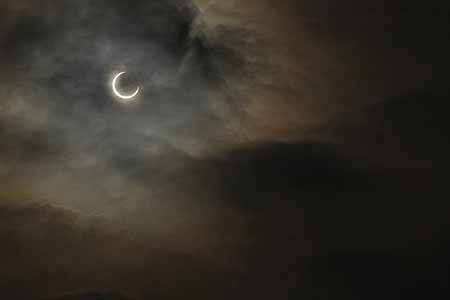 Daniel 12:1 - 3
In those days, I Daniel, heard this word of the Lord: "At that time there shall arise Michael, the great prince, guardian of your people; it shall be a time unsurpassed in distress since nations began until that time. At that time your people shall escape, everyone who is found written in the book. "Many of those who sleep in the dust of the earth shall awake; some shall live forever, others shall be an everlasting horror and disgrace. "But the wise shall shine brightly like the splendor of the firmament, and those who lead the many to justice shall be like the stars forever."

Hebrews 10:11 - 14, 18
Brothers and sisters: Every priest stands daily at his ministry, offering frequently those same sacrifices that can never take away sins. But this one offered one sacrifice for sins, and took his seat forever at the right hand of God; now he waits until his enemies are made his footstool. For by one offering he has made perfect forever those who are being consecrated. Where there is forgiveness of these, there is no longer offering for sin.

Mark 13:24 - 32
Jesus said to his disciples: "In those days after that tribulation the sun will be darkened, and the moon will not give its light, and the stars will be falling from the sky, and the powers in the heavens will be shaken. "And then they will see 'the Son of Man coming in the clouds' with great power and glory, and then he will send out the angels and gather his elect from the four winds, from the end of the earth to the end of the sky. "Learn a lesson from the fig tree. When its branch becomes tender and sprouts leaves, you know that summer is near. In the same way, when you see these things happening, know that he is near, at the gates. Amen, I say to you, this generation will not pass away until all these things have taken place. Heaven and earth will pass away, but my words will not pass away. "But of that day or hour, no one knows, neither the angels in heaven, nor the Son, but only the Father."

This Sunday’s gospel comes from one of the most difficult sections of Mark that is commonly known as the Olivet Discourse or “Little Apocalypse” (Mark 13:1-37). It’s so named because the discourse between Jesus and his four apostles - Peter, James, John, and Andrew - took place while Jesus “was sitting on the Mount of Olives opposite the temple area”, and its literary style is dominated by apocalyptic and prophetic symbolism (Mark 13:3).

Hard to miss is the eschatological overtone of the gospel reading: “[I]n those days…the sun will be darkened, and the moon will not give its light, and the stars will be falling from the sky, and the powers in the heavens will be shaken”; “and then [the Son of Man] will send out the angels and gather his elect from the four winds, from the end of the earth” (Mark 13:24-25, 27). ). The nerve-racking, end-of-the world language that begins with visions of the celestial bodies in disarray, rises to a crescendo with the appearance of the “Son of Man” - the royal, Messianic figure in Daniel 7 whose enthronement in heaven caps off the Last Day – and ends in a thunderous blast when Jesus warns that “this generation will not pass away until all these things have taken place” (Mark 13:30).

If there’s any doubt about the theme of this Sunday’s readings in spite of the eschatological language of the gospel reading, the first reading, also from the Book of Daniel, is selected to drive home the prophetic warning that the day is coming when the whole human race – from now to ancient times, from the current generation to Adam and Eve - must witness the unthinkable occurrence of the resurrection and the Last Judgement. "Many of those who sleep in the dust of the earth shall awake; some shall live forever, others shall be an everlasting horror and disgrace”, Daniel predicts (Daniel 12:2).

A key difficulty of the Olivette Discourse is that what is apparently a depiction of the end of the world that includes cosmic and catastrophic atrocities is predicted to occur at a time that is plainly inaccurate if understood literally. According to Jesus, “this generation will not pass away until all these things have taken place” (Mk 13:30), which suggests that the fulfillment of these eschatological events would have already taken place within the life-time of his contemporaries. If that’s the case, why are we still here two thousand years later, alive and kicking?

When it comes to biblical exegesis (interpreting the various passages of the Bible), it’s im-portant to understand the difference between the literal sense and the spiritual sense (see CCC 115-119). Literally, “the sun darkened”, the moon losing light, “the stars falling from the sky” (cf. Mark 13:24-25) suggest physical, cosmic disturbances. Spiritually these visions of heavenly chaos can be understood as God’s judgment against the pagan ways of Jerusalem which in Jesus’ time had deteriorated to an unseen level in terms of faith and morality (see commentary of Ignatius Catholic Study Bible New Testament on this passage). The final punishment of Jerusalem, mentioned repeatedly by the OT prophets and Jesus himself, would be so sweeping and devastating that it could only be described in end-of-the-world language. In 70 AD, which is well within the lifetime of Jesus’ contemporaries, a large Roman army under the generalship of Vespasian, the future Roman Emperor Titus, besieged and conquered the city of Jerusalem, demolishing the 500-hundred-year-old Temple, plundering the whole city, and killing 1.1 million people, of which the majority were Jewish. The rest is history.

For real-life application, let us end this reflection with a few thought-provoking questions: Given the “pagan ways” of our world today and its new lows in morality and faith, can we see the city of Jerusalem of 70 AD as the prefiguration of the world we live in? As the resi-dents of this “world city”, are we in danger of an imminent and devastating destruction that might sweep away not only a city but the whole world? Are we nearing the day of the sun darkening, the moon losing its light, and the stars falling from the sky?