The Shepherd and the King 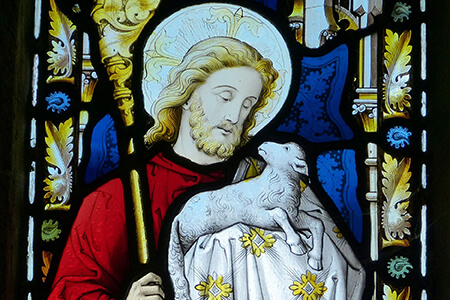 The Solemnity of Our Lord Jesus Christ, King of the Universe

Ezekiel 34:11-12, 15-17
Thus says the Lord GOD: I myself will look after and tend my sheep. As a shepherd tends his flock when he finds himself among his scattered sheep, so will I tend my sheep. I will rescue them from every place where they were scattered when it was cloudy and dark. I myself will pasture my sheep; I myself will give them rest, says the Lord GOD. The lost I will seek out, the strayed I will bring back, the injured I will bind up, the sick I will heal, but the sleek and the strong I will destroy, shepherding them rightly. As for you, my sheep, says the Lord GOD, I will judge between one sheep and another, between rams and goats.

1 Corinthians 15:20-26, 28
Brothers and sisters: Christ has been raised from the dead, the firstfruits of those who have fallen asleep. For since death came through man, the resurrection of the dead came also through man. For just as in Adam all die, so too in Christ shall all be brought to life, but each one in proper order: Christ the firstfruits; then, at his coming, those who belong to Christ; then comes the end, when he hands over the kingdom to his God and Father, when he has destroyed every sovereignty and every authority and power. For he must reign until he has put all his enemies under his feet. The last enemy to be destroyed is death. When everything is subjected to him, then the Son himself will also be subjected to the one who subjected everything to him, so that God may be all in all.

The theme of shepherd permeates the whole Bible. It also appears in this Sunday’s readings as the Church celebrates the feast of Christ the King to bring this liturgical year to a close. Why is the shepherd theme important? What are the underlying messages? Why uses it to celebrate Christ the King?

Shepherd is a popular biblical theme partly because the ancient Hebrews were a pastoral, seminomadic people. In Genesis, Abraham and Lot, his kinsman, had many flocks and herds. Eventually they had to go their separate ways in order to avoid internal conflicts (cf. Gen 13:5-9). Jacob spent many years tending his father-in-law’s flock in exchange for his consent to marry Rachel (Gen 29:15ff). Moses also was a shepherd in Midian before leading Israel out of Egypt (Ex 3:1).

More significantly, the Bible uses the shepherd theme to reveal a very important message in God’s divine plan: The false shepherds of this world have led His people astray; God, the Good Shepherd who cares deeply about His sheep, will come among us to shepherd His people personally. This loving and trusting relationship between God and His people is beautifully portrayed in this Sunday’s psalm reading, which is traditionally attributed to David who was incidentally both a shepherd and a king:

The LORD is my shepherd; there is nothing I lack. In green pastures you let me graze; to safe waters you lead me; you restore my strength. You guide me along the right path for the sake of your name (Psalm 23:1-3).

In Old Testament time, God entrusted His people, Israel, to the care of the shepherds He appointed, i.e. the leaders of Israel, particularly the political and religious leaders in Jerusalem. Unfortunately, they failed terribly in discharging their sacred duties. Thus, God chastised them through prophet Ezekiel: “Woe to the shepherds of Israel who have been pasturing themselves!... You have fed off their milk, worn their wool, and slaughtered the fatlings, but the sheep you have not pastured” (Ez 34:2-3). He promises in the 1st reading, “I myself will look after and tend my sheep” (Ez 34:11).

Ever faithful and true to His word, God does return in the person of the incarnate Christ. In Jesus, God is indeed pasturing His sheep Himself. In New Testament time, “God’s sheep” can be understood as a reference to the New Israel – the Church instituted by Christ. He continues to shepherd us through the Church clergy.

On this Solemnity of Our Lord Jesus Christ, King of the Universe, it’s fitting that we use the theme of the Good Shepherd to celebrate Jesus’ kingship. Like a good shepherd, the King knows his people and cares for them (cf. John 10:13-14). However, he is no ordinary king. Like David, his Old Testament type (i.e. a biblical character that mysteriously prefigures and anticipates Christ), he is a Shepherd-King. He “lays down his life for the sheep” (John 10:11).

As the Good Shepherd, Jesus epitomizes every attribute of a good king, not only does Christ the King protect his sheep, to the point of shedding his blood for them, he also shepherds them “with an iron rod” (Ps 2:9, Rev 12:5). In other words, he disciplines his sheep and holds them accountable for what they do. “The lost I will seek out, the strayed I will bring back, the injured I will bind up, the sick I will heal (but the sleek and the strong I will destroy), shepherding them rightly” (Ez 34:16). The Shepherd-King’s work is not finished just because of his Ascension to the Father. His shepherding work will conclude with the Last Judgement, in which “he will separate [his flock] one from another, as a shepherd separates the sheep from the goats” (Mt 25:32). When was the last time you fed the hungry, gave drink to the thirsty, welcomed a stranger, clothed the naked, cared for the ill, and visited those in prison (cf. Mt. 25: 35-36)? Let’s prepare ourselves well to meet the Shepherd-King while we can!

Is Christ the King in our Family?