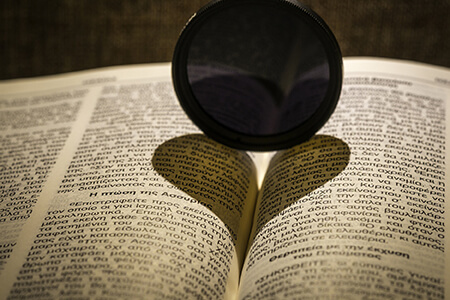 Exodus 20:1-17
In those days, God delivered all these commandments: "I, the LORD, am your God, who brought you out of the land of Egypt, that place of slavery. You shall not have other gods besides me. You shall not carve idols for yourselves in the shape of anything in the sky above or on the earth below or in the waters beneath the earth; you shall not bow down before them or worship them. For I, the LORD, your God, am a jealous God, inflicting punishment for their fathers' wickedness on the children of those who hate me, down to the third and fourth generation; but bestowing mercy down to the thousandth generation on the children of those who love me and keep my commandments. "You shall not take the name of the LORD, your God, in vain. For the LORD will not leave unpunished the one who takes his name in vain. "Remember to keep holy the sabbath day. Six days you may labor and do all your work, but the seventh day is the sabbath of the LORD, your God. No work may be done then either by you, or your son or daughter, or your male or female slave, or your beast, or by the alien who lives with you. In six days the Lord made the heavens and the earth, the sea and all that is in them; but on the seventh day he rested. That is why the LORD has blessed the sabbath day and made it holy. "Honor your father and your mother, that you may have a long life in the land which the LORD, your God, is giving you. You shall not kill. You shall not commit adultery. You shall not steal. You shall not bear false witness against your neighbor. You shall not covet your neighbor's house. You shall not covet your neighbor's wife, nor his male or female slave, nor his ox or ass, nor anything else that belongs to him."

1 Corinthians 1:22-25
Brothers and sisters: Jews demand signs and Greeks look for wisdom, but we proclaim Christ crucified, a stumbling block to Jews and foolishness to Gentiles, but to those who are called, Jews and Greeks alike, Christ the power of God and the wisdom of God. For the foolishness of God is wiser than human wisdom, and the weakness of God is stronger than human strength.

John 2:13-25
Since the Passover of the Jews was near, Jesus went up to Jerusalem. He found in the temple area those who sold oxen, sheep, and doves, as well as the money changers seated there. He made a whip out of cords and drove them all out of the temple area, with the sheep and oxen, and spilled the coins of the money changers and overturned their tables, and to those who sold doves he said, "Take these out of here, and stop making my Father's house a marketplace." His disciples recalled the words of Scripture, Zeal for your house will consume me. At this the Jews answered and said to him, "What sign can you show us for doing this?" Jesus answered and said to them, "Destroy this temple and in three days I will raise it up." The Jews said, "This temple has been under construction for forty-six years, and you will raise it up in three days?" But he was speaking about the temple of his body. Therefore, when he was raised from the dead, his disciples remembered that he had said this, and they came to believe the Scripture and the word Jesus had spoken. While he was in Jerusalem for the feast of Passover, many began to believe in his name when they saw the signs he was doing. But Jesus would not trust himself to them because he knew them all, and did not need anyone to testify about human nature. He himself understood it well.

“Lord, you have the words of everlasting life” is the response to the Psalm reading for this Sunday. The Psalm passages are quoted from Psalm 19 – my favorite psalm.

Psalm 19 begins with a beautiful, high-spirited exaltation, paying tribute to God’s magnificent creation that speaks. Speaks? Yes, God’s creations – the sun and the moon, the sunrise and the sunset, the flowers and the trees, the mountains and the valleys – speak; using a language that “proclaims its builder’s craft”; communicating a message that imparts knowledge and wisdom; uttering a sound that cannot be heard and yet resonates loud and clear “to the ends of the world” (cf. Ps. 19:2-4)! What the psalmist is extolling is the word of God; a word that is “perfect”, “true” and “just” (Ps. 19:8-10).

Earlier in the first reading, the same word, pronounced by God in the midst of a theophany as part of His covenant with the holy people on Mount Sinai, is solemnly promulgated: delivered through Moses, the intercessor between God and His people; given to Israel, who promises with one voice to “do everything that the Lord has told us” (Ex 24:3); and decreed in the Decalogue, which means literally the “ten words” or the Ten Commandments (CCC 2059-2060). Written on two separate tablets – three on one and seven on the other – these are words of love: “the first three concern love of God, and the other seven love of neighbor” (CCC 2067).

I always remember what my professor taught me when I was taking a course on the Old Testament at the St. Augustine Seminary of Toronto. He said the Greeks lived in a world of numbers, but the Israelites lived in a world of word, dynamic and prophetic. Word to them is electricity to us – a force that makes things happen and is indispensable. At this point, every reader who is human and breathing would probably ask, having gone this far in reading the Bible, “Who is this word”?

John began his gospel by tackling this question head on: “In the beginning was the Word, and the Word was with God, and the Word was God” (Jn 1:1). The Word is further identified as Christ incarnate, who “became flesh and made his dwelling among us” (Jn 1:14). But if Jesus, the Word of God, is “perfect”, “true” and “just”, as the Psalm reading tells us he is; and if the Decalogue - the 10 words of love - also finds its origin in him; how are we supposed to understand the act of violence committed by the same Word of God in this Sunday’s gospel? What Jesus did was unambiguously violent: “He made a whip out of cords and drove them all out of the temple area, with the sheep and oxen, and spilled the coins of the money changers and overturned their tables” (John 2:15).

Let’s be very clear. It will be ignorance to the extreme for anyone to suggest that the temple cleansing story is meant to justify the use of force. Let’s face it; it would take a radically different direction for Jesus, whose ministry and message throughout the gospel are all about love, peace, and humility, to suddenly promote violence. Those who read the Johannine narrative in context can’t possibly miss its culminating theme, namely, that the temple is a sign of Christ’s body, which will be destroyed and raised up in three days – an allusion to the Cross and the Resurrection (Note 1). This is how Jesus explains his action: “Destroy this temple and in three days I will raise it up” (John 2:19).

Still, why is it necessary for him to resort to a violent act to communicate his theological message? To truly understand Jesus’ action, we must keep in mind his prophetic ministry and how it works. If I were to pick 10 OT promises that any scriptural reader must remember at all times, this one, revealed by Moses, would be one of them: "A prophet like me will the LORD, your God, raise up for you from among your own kinsmen; to him you shall listen” (Dt.18:15). Turned out, the promised prophet is Jesus – the Prophet of all prophets.

The OT prophets came from, shall we say, a very special species. They were mostly shunned by the very people they were summoned to enlighten: kings, political leaders, and religious authorities. Sometimes they had to do very unusual things in order to drive home their messages. Hosea married a harlot in order to show Israel God’s displeasure with its infidelity. Ezekiel was asked to eat bread baked on cow’s dung in order to forewarn the Israelites of the abomination of having to eat unclean food while in exile (Eze 4:12-15). God’s instruction to Isaiah was even more bizarre: He was asked to walk naked and barefoot through Jerusalem for 3 years! The prophet followed God’s order to a tee, not because he enjoyed exposing himself – God forbid! - but because he needed to convince the Judeans of their futile attempt to court the Egyptians and Ethiopians. These nations were bound to be defeated by the Assyrians and taken away as captives in their nakedness (Is. 20:3-6).

Given Jesus’ prophetic ministry and the way it works, it’s fair to conclude that there’s a deeper significance to Jesus’ destructive act in the cleansing of the temple. Just as Isaiah’s nakedness doesn’t make him a flasher; Jesus’ destructive act doesn’t make him a violent person. Both acts are prophetic, meant to communicate a prophetic message. In Jesus’ case, the message is to warn the Jews of the violent destruction of the temple (which happened in 70 A.D.). The temple is his body. The destruction of a temple made by human hands is the beginning of the new Temple in heaven. It’s a sign pointing to the Cross and the Resurrection. He himself is the new Temple, the Body of Christ, the Church. Through Christ, a new way of worshipping God is about to begin, when all peoples are gathered and united in the sacrament of his body and blood, worshipping God “in spirit and truth” (Jn 4:23, note 2).