Why Is Jesus the Son of Man? 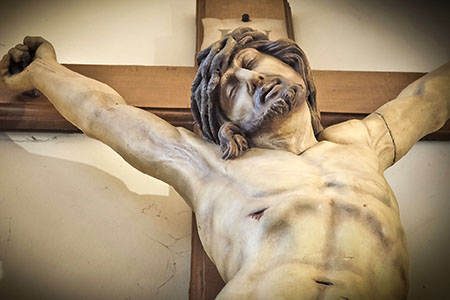 Feast of the Transfiguration of the Lord

Daniel 7:9-10, 13-14
As I watched: Thrones were set up and the Ancient One took his throne. His clothing was bright as snow, and the hair on his head as white as wool; his throne was flames of fire, with wheels of burning fire. A surging stream of fire flowed out from where he sat; Thousands upon thousands were ministering to him, and myriads upon myriads attended him. The court was convened and the books were opened. As the visions during the night continued, I saw: One like a Son of man coming, on the clouds of heaven; When he reached the Ancient One and was presented before him, The one like a Son of man received dominion, glory, and kingship; all peoples, nations, and languages serve him. His dominion is an everlasting dominion that shall not be taken away, his kingship shall not be destroyed.

2 Peter 1:16-19
Beloved: We did not follow cleverly devised myths when we made known to you the power and coming of our Lord Jesus Christ, but we had been eyewitnesses of his majesty. For he received honor and glory from God the Father when that unique declaration came to him from the majestic glory, "This is my Son, my beloved, with whom I am well pleased." We ourselves heard this voice come from heaven while we were with him on the holy mountain. Moreover, we possess the prophetic message that is altogether reliable. You will do well to be attentive to it, as to a lamp shining in a dark place, until day dawns and the morning star rises in your hearts.

Matthew 17:1-9
Jesus took Peter, James, and his brother, John, and led them up a high mountain by themselves. And he was transfigured before them; his face shone like the sun and his clothes became white as light. And behold, Moses and Elijah appeared to them, conversing with him. Then Peter said to Jesus in reply, "Lord, it is good that we are here. If you wish, I will make three tents here, one for you, one for Moses, and one for Elijah." While he was still speaking, behold, a bright cloud cast a shadow over them, then from the cloud came a voice that said, "This is my beloved Son, with whom I am well pleased; listen to him." When the disciples heard this, they fell prostrate and were very much afraid. But Jesus came and touched them, saying, "Rise, and do not be afraid." And when the disciples raised their eyes, they saw no one else but Jesus alone. As they were coming down from the mountain, Jesus charged them, "Do not tell the vision to anyone until the Son of Man has been raised from the dead."

Last year the CMCC Bible Study Program celebrated 15 years of studying the Bible and growing together in the word of God. The book we studied to commemorate this special year was Daniel. As usual, the program ended in June, but it will begin anew in September together with my other programs and activities. The two summer months in between provide me with a cushion not only to take a break but also to rejuvenate, study, plan, and get ready for next year.

With the fascinating and sometimes frightening images of the Book of Daniel still fresh in my head – the statue of four metals being smashed by a pulverizing stone, three young men worshipping God safely in a burning fiery furnace, Daniel being protected by God's angel in the den of lions, the visions of the four beasts, etc. – I was pleasantly surprised to find that the Church would use one of the most well-known Danielic images – the enthronement in heaven of “the Son of man” – as a key theme that connects all three readings of the feast of the Transfiguration of the Lord.

The influence that the Book of Daniel has on Christianity is profound and indisputable. The New Testament books, particularly some of the Pauline epistles and the Book of Revelation, often take symbols, images, and phrases straight out of Daniel to demonstrate that the Danielic prophecies have come to fulfillment in Jesus. Jesus himself also refers to Daniel on numerous occasions, including calling himself the “Son of man” and linking his own eschatological glory to Daniel's vision of the Son of man riding on the clouds of heaven (Mt. 24:30, 26:64).

The Church Fathers are quick to recognize the theological significance of the “Son of man” in Daniel's vision. Ancient Jewish tradition identified this title with a heavenly Messiah (Ignatius Catholic Study Bible, comment on Daniel 7:13, p.32). In addition to its messianic implication, the Church Fathers see in this unusual title the mystery of God taking on human nature, and in doing so perfecting and elevating it to a lofty height inconceivable to the human mind and unreachable by mere human efforts. This gives us a more profound understanding of why our “hope in the Lord” will enable us to “soar as with eagles' wings” (Isaiah 40:31). St. Athanasius explains this overpowering mystery of the divinization of humanity in the most succinct way possible: “The Son of God became the Son of man… so that man…could become a son of God” (CCC 460).

Of all the experiences that Peter encounters on Mount Tabor (generally believed to be the holy site of Transfiguration), he remembers one in particular: the Father's confirmation of Jesus as “my Son, my beloved, with whom I am well pleased” (2 Pt 1:17). For Peter, the confirmation is a powerful assurance that enables him to believe “the power and coming of our Lord Jesus Christ” cannot be one of those “cleverly devised myths” (2 Pt 1:16).

Finally, we can't blame Peter for appearing a little overwhelmed, if not downright disoriented, when he proposes to make three tents on the Mount of Transfiguration: “one for [Jesus], one for Moses, and one for Elijah” (Mt. 17:4). After all, revealed for the eyes of Peter, James and John to behold at the Transfiguration is “a sublime expression of God's glory and, in a certain sense, a glimpse of heaven on earth” that have proven too much even for both Elijah and Moses to see (BXVI, Sacramentum Caritatis, n.35; 1 Kgs 19:13; Ex 33:20-23).