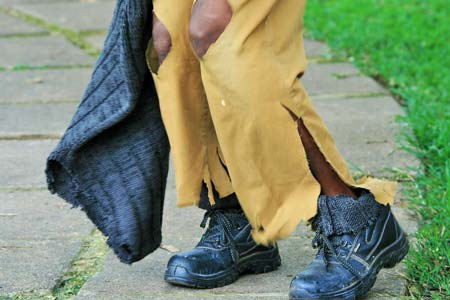 Zechariah 9:9-10
Thus says the LORD: Rejoice heartily, O daughter Zion, shout for joy, O daughter Jerusalem! See, your king shall come to you; a just savior is he, meek, and riding on an ass, on a colt, the foal of an ass. He shall banish the chariot from Ephraim, and the horse from Jerusalem; the warrior's bow shall be banished, and he shall proclaim peace to the nations. His dominion shall be from sea to sea, and from the River to the ends of the earth.

Matthew 11:25-30
At that time Jesus exclaimed: "I give praise to you, Father, Lord of heaven and earth, for although you have hidden these things from the wise and the learned you have revealed them to little ones. Yes, Father, such has been your gracious will. All things have been handed over to me by my Father. No one knows the Son except the Father, and no one knows the Father except the Son and anyone to whom the Son wishes to reveal him." "Come to me, all you who labor and are burdened, and I will give you rest. Take my yoke upon you and learn from me, for I am meek and humble of heart; and you will find rest for yourselves. For my yoke is easy, and my burden light."

Reminiscent of the thought and expression of John's Gospel, today's sublime message from the Gospel of Matthew reveals Jesus' unique relationship as Son to the Father. As Son, Jesus has complete knowledge of the Father and it is in this confidence that He discloses His Father's primary objects of affection – His “favorites”.

Jesus the Son is God the Father's anawim. Not only is He poor and stands with the poor (rf 2 Cor 8:9; Lk 6:20-21, 14:12-14; Mt 25:34-40), He even “emptied Himself, taking the form of a slave. . . He humbled Himself, becoming obedient to death, even death on the cross” (Phil 2:7-8). Jesus' kenosis (self emptying) means that He voluntarily deprives Himself to become poor and freely chooses to enter into the “powerless” class of the anawim, making Himself at one with them (CCC 460). Unlike the scribes and the Pharisees who load people with onerous observance of the laws, Jesus issues them a heartwarming invitation and shows solidarity with those burdened by life's struggles and troubles.

It is in this regard that Jesus encourages people to take up “His yoke”. What makes Jesus' yoke easy and His burden light is, as He says, the meekness and humility of the heart (Mt 11:29). Pope Benedict XVI in his General Audience Feb 15, 2006 said: “the spirituality of the biblical anawim, that is, of those faithful who not only recognize themselves as poor in the detachment from all idolatry of riches and power, but also in the profound humility of a heart emptied of the temptation to pride and open to the bursting in of the divine saving grace.”

Though we are not living under the weight of the Mosaic law as the ancient Jews, yet the weight of sins is equally heavy on us. When we willingly become the anawim – in humility, obedience and trust – we will be God's “favorites” and Jesus will stand with us as He did with the anawim in His time. He will provide us with strength and ability to come out from the crushing load of sins. He will lead us to freedom and rest, a new covenantal rest of faith and love where joy and peace will surely far outweigh the weight of the yoke.