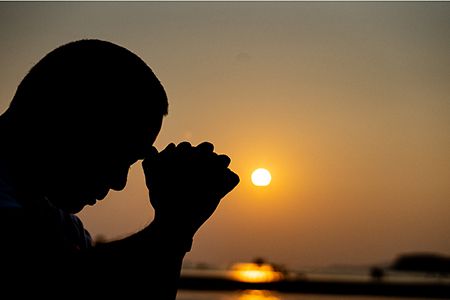 Sirach 35:12-14, 16-18
The LORD is a God of justice, who knows no favorites. Though not unduly partial toward the weak, yet he hears the cry of the oppressed. The Lord is not deaf to the wail of the orphan, nor to the widow when she pours out her complaint. The one who serves God willingly is heard; his petition reaches the heavens. The prayer of the lowly pierces the clouds; it does not rest till it reaches its goal, nor will it withdraw till the Most High responds, judges justly and affirms the right, and the Lord will not delay.

2 Timothy 4:6-8, 16-18
Beloved: I am already being poured out like a libation, and the time of my departure is at hand. I have competed well; I have finished the race; I have kept the faith. From now on the crown of righteousness awaits me, which the Lord, the just judge, will award to me on that day, and not only to me, but to all who have longed for his appearance. At my first defense no one appeared on my behalf, but everyone deserted me. May it not be held against them! But the Lord stood by me and gave me strength, so that through me the proclamation might be completed and all the Gentiles might hear it. And I was rescued from the lion's mouth. The Lord will rescue me from every evil threat and will bring me safe to his heavenly kingdom. To him be glory forever and ever. Amen.

Luke 18:9-14
Jesus addressed this parable to those who were convinced of their own righteousness and despised everyone else. “Two people went up to the temple area to pray; one was a Pharisee and the other was a tax collector. The Pharisee took up his position and spoke this prayer to himself, ‘O God, I thank you that I am not like the rest of humanity -- greedy, dishonest, adulterous -- or even like this tax collector. I fast twice a week, and I pay tithes on my whole income.’ But the tax collector stood off at a distance and would not even raise his eyes to heaven but beat his breast and prayed, ‘O God, be merciful to me a sinner.’ I tell you, the latter went home justified, not the former; for whoever exalts himself will be humbled, and the one who humbles himself will be exalted.”

I believe many of us cannot but marvel at Jesus' mastery in story-telling. Today's Gospel reading is one of the memorable parables that Jesus used as a means of bringing out His message.

The characters in the parable that Jesus employed are an oppugnant pair in Jesus' time – a Pharisee and a tax collector. The Pharisee, who not only strictly observes the Law, but even goes far beyond it, is both self-righteous and righteous in the eyes of many Jews. On the other hand, the tax collector, due to the nature of his job, is publicly regarded as sinner and often being despised. While the Pharisees' words are probably true, they are no prayer but braggadocio! And while the tax collector may truly be a sinner, he acknowledges his sins and feels sorry for them. So while the Pharisee feels that God needs him, the tax collector feels he needs God; his need for God's mercy.

The Hebrew word anaw means humble, lowly or meek. It is a favorite word found in the books of Psalms and Proverbs. A person of such disposition is described as one who is dear to God. He will hear his/her prayers and will uplift, defend and save such a one. In the New Testament, it is from the lips of Jesus that affirms such favor of God. This is the attitude that the tax collector displayed, a proper manner before God and therefore “he went back to his home justified rather than the [Pharisee]” (Lk 18:14).

Humility is not weakness rather, as St Augustine says, it is “the foundation of all the other virtues hence, in the soul in which this virtue does not exist, there cannot be any other virtue except in mere appearance” – as is reflected in the Pharisee today.