Be with me through the storms 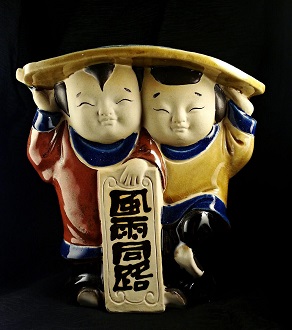 The Solemnity Our Lord Jesus Christ, King of the Universe

Daniel 7:13 - 14
As the visions during the night continued, I saw one like a Son of man coming, on the clouds of heaven; when he reached the Ancient One and was presented before him, the one like a Son of man received dominion, glory, and kingship; all peoples, nations, and languages serve him. His dominion is an everlasting dominion that shall not be taken away, his kingship shall not be destroyed.

Revelation 1:5 - 8
Jesus Christ is the faithful witness, the firstborn of the dead and ruler of the kings of the earth. To him who loves us and has freed us from our sins by his blood, who has made us into a kingdom, priests for his God and Father, to him be glory and power forever and ever. Amen. Behold, he is coming amid the clouds, and every eye will see him, even those who pierced him. All the peoples of the earth will lament him. Yes. Amen. "I am the Alpha and the Omega, " says the Lord God, "the one who is and who was and who is to come, the almighty."

John 18:33B - 37
Pilate said to Jesus, "Are you the King of the Jews?" Jesus answered, "Do you say this on your own or have others told you about me?" Pilate answered, "I am not a Jew, am I? Your own nation and the chief priests handed you over to me. What have you done?" Jesus answered, "My kingdom does not belong to this world. If my kingdom did belong to this world, my attendants would be fighting to keep me from being handed over to the Jews. But as it is, my kingdom is not here." So Pilate said to him, "Then you are a king?" Jesus answered, "You say I am a king. For this I was born and for this I came into the world, to testify to the truth. Everyone who belongs to the truth listens to my voice."

We are all like Pilate: we do not understand Christ and His Kingship. So often when we are faced with the many trials and sufferings, or when we are confused by what are happening in this world, we turn to God only to challenge Him, to question Him why things have happened the way they have. We simply do not understand the way of the Lord. We have missed the point and used worldly logic to interrogate the real King of kings. In doing so, we are no different from Pilate.

Let’s make no mistake: Christ’s kingship and His kingdom are established not through violence or earthly powers, but through overcoming sins and death at a pricey cost of a shameful death on the Cross, for you and for me. He has “re-established” His kingdom on earth by His own blood, and we are called to defend and extend this kingdom (His Church and the truth) using His way and not the human way. (Ref. “To Him who loves us and freed us from our sins by His blood, and made us to be a kingdom, priests serving his God and Father.” - Revelation 1:5-6)

“I came into this world to testify to the truth. Everyone who belongs to the truth listens to my voice.” (John 18:37)

We need to challenge our human understanding and the distorted views presented to us by the world. We are called to stand by the truth and declare war on the evil, even when it means immense sufferings and many forms of persecutions.

In Chinese, there is a proverb that says 風雨同路 “As companions along the same path, let’s brave the stormy weather together” which has dual meanings for Christ’s followers. It is God telling us that the earthly journey for us is indeed a stormy one, yet He has also promised to be with us “always until the end of time” (Matthew 28:20). The conflicts between His Kingdom and the earthly powers will continue until He comes again. The final triumph and the true kingship belong to Him and we are to share His glory if we persevere and walk with Him till the end. As He has not deserted us the sinners, let us not make Pilate’s mistake and desert Christ the real king of our lives.

Brothers and sisters, hang in there! As the turmoil, terrors and persecutions of this world continue to haunt us, let us not deviate from His path but stick with this Christ the King who will lead us to the final victory!

Christian way of tolerance and intolerance…