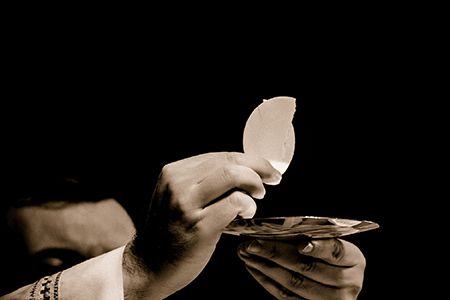 This Sunday is Palm Sunday, when Holy week begins with the commemoration of the Lord’s entrance into Jerusalem. Although Jesus has always refused attempts to make him king, he chooses the time and prepares the details for his messianic entry into the city. Ac-claimed as son of David, as the one who brings salvation, Jesus enters His City riding on a colt that has never been ridden, a symbol of His sovereignty. The subjects of his kingdom on that day are children and the humble of heart, who acclaim Him "Blessed is the king who comes in the name of the Lord". Today, we acclaim Him with the same words in the Sanctus of the Eucharistic liturgy “Hosanna in the highest. Blessed is he who comes in the name of the Lord, Hosanna in the highest” (Hosanna means "Save!" or "Give salvation!") (Ref CCC 559, 570).

In the Gospel reading, we hear St. Luke’s account of the Passion of Christ. What strikes me most in this passage is Jesus’ innocence. Both Pilate and Herod found nothing against Jesus. “A third time Pilate said to them, ‘Why, what evil has he done? I have found in him no ground for the sentence of death”’(Luke 23:22). Neither did Herod find Jesus guilty; he “treated Jesus with contempt and mocked him” but “sent him back to Pilate” (Luke 23:11). After Jesus “breathed his last”, the centurion “saw what had taken place, he praised God and said certainly this man was innocent” (Luke 23: 46, 47). The crowds who had gathered there for this spectacle saw what had taken place, “returned home, beating their breasts” (Luke 23:48).

Yet Jesus went up to Jerusalem voluntarily, knowing well that He would die a violent death there because of the opposition of sinners (CCC 569). He did this out of obedience to the Father and out of love for us sinners, He “humbled himself and became obedient for us to death -- even death on a Cross” (Philippians 2:8).

In his Lenten message, Pope Francis invited Christians today to embody the paschal mys-tery more deeply and concretely in their personal, family and social lives. If we follow this journey, the Holy Father said, “It is possible to rediscover the joy of God’s plan for creation and for each of us, which is to love Him, our brothers and sisters, and the entire world and to find in this love our true happiness” (Pope Francis Lenten Message 2019).

I am ready to follow this journey, are you?