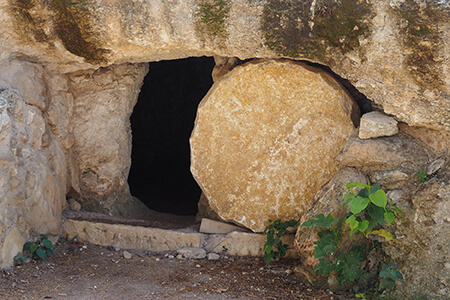 The Resurrection of the Lord

Acts 10:34A, 37-43
Peter proceeded to speak and said: “You know what has happened all over Judea, beginning in Galilee after the baptism that John preached, how God anointed Jesus of Nazareth with the Holy Spirit and power. He went about doing good and healing all those oppressed by the devil, for God was with him. We are witnesses of all that he did both in the country of the Jews and in Jerusalem. They put him to death by hanging him on a tree. This man God raised on the third day and granted that he be visible, not to all the people, but to us, the witnesses chosen by God in advance, who ate and drank with him after he rose from the dead. He commissioned us to preach to the people and testify that he is the one appointed by God as judge of the living and the dead. To him all the prophets bear witness, that everyone who believes in him will receive forgiveness of sins through his name.”

Colossians 3:1-4
Brothers and sisters: If then you were raised with Christ, seek what is above, where Christ is seated at the right hand of God. Think of what is above, not of what is on earth. For you have died, and your life is hidden with Christ in God. When Christ your life appears, then you too will appear with him in glory.

In 1980, some ossuaries were discovered in the neighborhood of Jerusalem with inscriptions bearing the same name of some people from the New Testament. Among them were Jesus son of Joseph, Mary and Jose (short for Joseph). This leads to the claim that these ossuaries were from Jesus' family tomb. In March 2007, a documentary (The Lost Tomb of Jesus) was broadcast and a book (The Jesus Family Tomb) was also released. Needless to say, many Christians were upset by the claim. Not only does it contradict the belief of the resurrection and the ascension of Jesus as well as the assumption of the Blessed Virgin Mary; it directly challenges the core of the Christian faith.

Yet despite this controversy, today, the world still celebrates Easter Sunday, commemorating the resurrection of Jesus. Though Jesus does not appear in today's Gospel episode, and that there is no ocular proof of Him actually risen, we have eye witnesses who gave detailed descriptions of what they saw at that moment when they went into the empty tomb. They saw the “linen cloths lying there, and the handkerchief which had been about his head, not lying with the linen cloths, but folded in a place by itself” (Jn 20:6-7). Later, in his post Pentecostal sermon, Peter together with the other apostles, crowned themselves as witnesses of Jesus' resurrection (rf Acts 2:31-32).

Perhaps true witnessing is not what the apostles report but how they act, and the drastic change they exhibit. From denying and abandoning Jesus earlier and hiding themselves in the upper room, they now fearlessly and openly siding with Jesus, the “crucified criminal”, and proclaim His death and resurrection despite many ridicules, hardships and persecutions (rf Acts 3:12-15, 5:30-32, 10:39-42). Should we doubt and accuse Peter and John, together with the other apostles, of fraud and cover-up? Should we believe that they knew Jesus did not rise bodily from the dead and they fabricated a fraudulent story, for which they were prepared to die? Did they really hide the body of Jesus in another tomb?

Jesus' resurrection is a faith-based story. It cannot be proved empirically, neither can it be disproved by some archaeological findings. As St Thomas Aquinas says, “For those with faith, no evidence is necessary; for those without it, no evidence will suffice”. The “empty tomb” gives us a space of freedom ― we can choose to believe or not to believe. And for those who choose to believe, today's solemnity of the Resurrection of Jesus will be a good time to profess, with conviction, the article of the Creed: “On the third day, He (Jesus) rose again from the dead . . .”