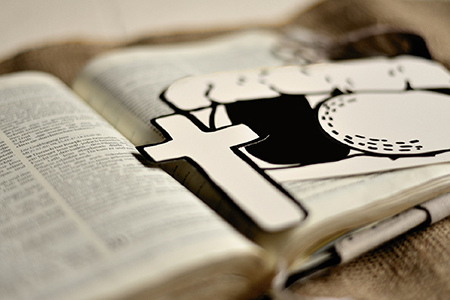 Second Sunday of Easter (Or Sunday of Divine Mercy)

Acts 4:32-35
The community of believers was of one heart and mind, and no one claimed that any of his possessions was his own, but they had everything in common. With great power the apostles bore witness to the resurrection of the Lord Jesus, and great favor was accorded them all. There was no needy person among them, for those who owned property or houses would sell them, bring the proceeds of the sale, and put them at the feet of the apostles, and they were distributed to each according to need.

1 John 5:1-6
Beloved: Everyone who believes that Jesus is the Christ is begotten by God, and everyone who loves the Father loves also the one begotten by him. In this way we know that we love the children of God when we love God and obey his commandments. For the love of God is this, that we keep his commandments. And his commandments are not burdensome, for whoever is begotten by God conquers the world. And the victory that conquers the world is our faith. Who indeed is the victor over the world but the one who believes that Jesus is the Son of God? This is the one who came through water and blood, Jesus Christ, not by water alone, but by water and blood. The Spirit is the one that testifies, and the Spirit is truth.

John 20:19-31
On the evening of that first day of the week, when the doors were locked, where the disciples were, for fear of the Jews, Jesus came and stood in their midst and said to them, "Peace be with you." When he had said this, he showed them his hands and his side. The disciples rejoiced when they saw the Lord. Jesus said to them again, "Peace be with you. As the Father has sent me, so I send you." And when he had said this, he breathed on them and said to them, "Receive the Holy Spirit. Whose sins you forgive are forgiven them, and whose sins you retain are retained." Thomas, called Didymus, one of the Twelve, was not with them when Jesus came. So the other disciples said to him, "We have seen the Lord." But he said to them, "Unless I see the mark of the nails in his hands and put my finger into the nailmarks and put my hand into his side, I will not believe." Now a week later his disciples were again inside and Thomas was with them. Jesus came, although the doors were locked, and stood in their midst and said, "Peace be with you." Then he said to Thomas, "Put your finger here and see my hands, and bring your hand and put it into my side, and do not be unbelieving, but believe." Thomas answered and said to him, "My Lord and my God!" Jesus said to him, "Have you come to believe because you have seen me? Blessed are those who have not seen and have believed." Now Jesus did many other signs in the presence of his disciples that are not written in this book. But these are written that you may come to believe that Jesus is the Christ, the Son of God, and that through this belief you may have life in his name.

Resurrection is not an experience we can claim to know empirically and existentially. It is hard, if not impossible, to wrap our heads around the idea that one day our bodies will and must “rise” again after death.

How is it possible for a corrupt body that has dissolved into preexisting matter to regain its original bodily form (if that’s what the Bible means by “resurrection”)? Think about it: Isn’t it pretty good if we could continue to exist spiritually after death and live in the blessedness of God’s everlasting kingdom? Why then does the Bible teach the necessity of regaining our bodily form? Will rejoining the body, which must exist in the temporal and spatial order and is subject to the limitations of senses, impede the freedom and spiritual clarity of our soul? Does resurrection signify a return to biological life (which appears to be the case for the risen Christ who ate and drank together with his disciples (cf. Jn 21:12-13, Lk 24:13ff))? For many years after my baptism, questions such as these had made me question the credibility of the resurrection stories in the gospel. I was unconvinced that the resurrection of the dead was a cosmic event of hope and joy, even if it was a Church teaching.

The resurrection account in this Sunday’s gospel, in which the risen Christ shows his wounds to his disciples twice - first in Thomas’ absence, and later when he returns - doesn’t answer all the questions above. But it does give us a good opportunity to examine some of them, especially those pertaining to the properties of the resurrected body.

First of all, the wounds on Jesus’ risen body. Are we to conclude from this appearance that the inflictions suffered by the biological body will somehow affect the risen body and remain intact even after resurrection? This cannot be a very enticing proposition for those hoping the resurrection would give them a perfect body! For hockey players living with no teeth and broken bones secured by screws, their only hope of regaining a healthy and complete body has just gone up in smoke! And what about Jesus’ subsequent appearance to his disciples on the seashore of Tiberias and his appearance to the two disciples on the road to Emmaus (Jn 21: 1ff, Lk 24:13ff)? Both appearances involve the consumption of edibles. Does this mean our risen bodies will continue to live biologically? So many unanswered questions!

When in doubt, Pope Benedict XVI is one of the few mentors to whom I always turn. His answer? “Appearing, speaking, and sharing meals: these three self-manifestations of the risen Lord belong together; they were his ways of proving that he was alive” (Jesus of Nazareth I, p.271). In other words, the risen Christ ate not because he needed the nourishment of the food, but because he wanted his disciples to know that he had truly overcome death and was alive. Makes sense! But where did the food go after consumption? The Angelic Doctor has the answer: It was dissolved into preexisting matter (The Compendium of Theology, I.238). The same explanation is applicable to his wounds. They show on his risen body not because they must, but because the disciples need to see them.

What many Christians have often failed to fully comprehend, myself included, is the awesome power unleashed by the Pascal Mystery. The outpouring of salvific grace as a result of Jesus’ single, never-before-and-never-after redemptive act has truly rendered Satan’s stranglehold on humanity since the fall of Adam and Eve completely powerless. Not only have we been redeemed from sin by the blood of the Lamb of God; the body, corruptible and often in conflict with the spirit as it is, will also go through a complete transformation and renewal on the Last Day by virtue of the power of Jesus’ resurrection (cf. Romans 7:18-19; The Compendium of Theology, I.167)! As St. Paul has wisely observed in addressing the issue of the risen body: “It is sown corruptible; it is raised incorruptible. It is sown dishonorable; it is raised glorious. It is sown weak; it is raised powerful. It is sown a natural body; it is raised a spiritual body” (1 Cor 15:42-44).

On the 3rd day – the Easter Sunday – Jesus’ resurrection has literally changed everything! The 3rd day is also the 8th day, the first day of a new week. The theological significance of this day just cannot be overstated. St. Paul would go so far as to say, “And if Christ has not been raised, then empty (too) is our preaching; empty, too, your faith” (1 Cor 15:14).

This is heavy stuff, but let me explain. If the first week (or the first 7 days) brings the first creation (which is this world, whose creation has been detailed in the Book of Genesis), the second week, launched by the 8th day (which is also the 3rd day, the day of resurrection), ushers in the New Creation, of which we, the children of God, are a part. As a result of Jesus’ resurrection, our natural bodies will also be raised and glorified on the Last Day to share the glorious properties of Jesus’ resurrected body: impassibility, clarity, agility, and subtility (The Compendium of Theology, I.168; CCC645). Such properties are already on display in Jesus’ post-resurrection appearances, including in this Sunday’s gospel. On that day, the spiritualized and glorified body will be fully permeated by the spirit and return to perfect unity and harmony with the soul (St. John Paul II, General Audience, December 9, 1981).

This whole thing must come to pass just as our Lord has promised: "Behold, I make all things new" (Rev 21:5). On that day, everything will be restored to its original beauty and fully reconciled to God through Christ, including the body (cf. Col 1:20). It’s truly a brand-new world. “There shall be no more death or mourning, wailing or pain, (for) the old order has passed away” (Rev 21:4).