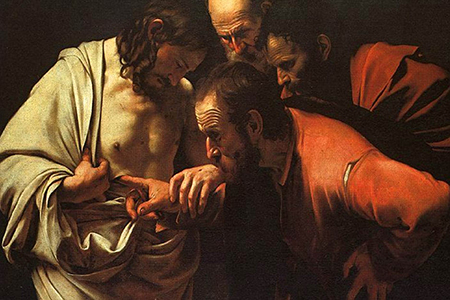 When it comes to the subject of belief, whether religious belief or any kind of belief, most people fall into one of these three groups: the gullible, the critical and the skeptical. The gullible are those who easily accept any statement at face value with little evidence required. The skeptics are just the opposite. They doubt everything in general and almost on principle. They question the authenticity of ideas, statements or people. Most people however, fall into the second group, that is, being critical. Practically, they are not suspicious but require some evidence before they would undeniably believe.

Unfortunately, today's Gospel reading presents not only a doubtful Thomas but an extreme skeptic. First, he distrusts his own band of brothers, his closest friends and sufficiently enough as witnesses. Second, he makes a very bold and challenging demand for himself as a condition to believe. Obviously, the evidence of seeing is not enough for him (the apostles did not believe Mary Magdalene and the other women's words that they saw Jesus after the resurrection rf Lk 24:10-11, Mk 16:11); he needs a concrete proof. Concrete to the point that he needs to see the marks of Jesus' crucifixion and not only so, he himself has to touch the different nail marks with his fingers and hands (rf Jn 20:25). Thomas represents all those who, like him, are by nature or temperament suspicious of everyone and everything.

But today, rather than focusing on the “doubtful Thomas”, let us see how Jesus deals with this third group of people. Basically, Jesus accepts them as they are. He does not expect people to accept all His teachings and He never forces people to believe Him. Instead, He prefers His disciples to use their brains. He wants intelligent disciples who would not accept just anything without a minimum amount of evidence. Jesus' miraculous powers, His shining virtues and His great wisdom serve as evidences to warrant belief in Him. This time, Jesus does not use such evidences as proof, rather, with utter meekness, Jesus gently submits to Thomas' imposing demand and examination and let the evidence that he demands speaks for itself and for him. It is only after Thomas admits the fact and his skepticism dissolves does Jesus mildly chide him, “Have you come to believe because you have seen me?” (Jn 20:29).

This welcoming attitude of Jesus toward the skeptics reassures those of us who may belong to this category. Jesus does not reject us but regrets that we are so hard to convince. Though a healthy skepticism may not be harmful, we must not be skeptical for skeptical sake, certainly not to exclude a sense of wonder and an openness to mystery. An overly distrustful nature may at best, make us miss a lot of beautiful insights or discoveries and at worst, lead us to stubbornness and our hearts turn to stone. Excess skepticism could also be a sign of pride and self-righteousness; just like the religious leaders and the Pharisees. Today is also the Divine Mercy Sunday; let us pray that Jesus' mercy and His patience will enlighten dubious minds.