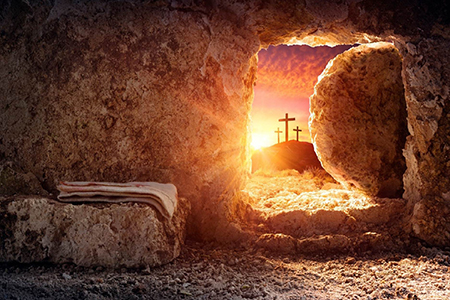 Alleluia! Our Lord is risen! Happy Easter! This is the Sunday we have eagerly awaited since Ash Wednesday during the 40 days of Lent. In the First Reading is Peter’s powerful testimony, “We are witnesses”; on the third day of his Passion, Jesus has risen from the dead and appeared to those of his disciples chosen as witnesses, and in the next 40 days, there have been several appearances when they have eaten and drunk with him (Acts 10:39, Ref Acts 1:3, ICSB P207).

The good news that Jesus is risen is first made known to Mary Magdalene and the holy women who on the third day, have gone to finish anointing the body of Jesus that has been buried in haste because the Sabbath began on the evening of Good Friday. “[Seeing] that the stone had been removed from the tomb”, Mary Magdalene went to Simon Peter and the other disciple that Jesus loved – John the Evangelist – and told them, “they have taken the Lord out of the tomb, and we do not know where they have laid him” (Jn 20:1-2, Ref CCC 641). These women are the first messengers to deliver the news of Christ's Resurrection to the apostles. Mary Magdalene is a devoted disciple of Christ, who has been freed of demonic possession and whose love for Jesus has carried her all the way to the cross. (Ref. Lk 8:2 , Jn 19:25, ICSB P199, CCC 641).

Upon hearing this, Peter and John run to the tomb together. John reaches the tomb first, yet he defers to the honour and authority that Jesus bestows on Simon Peter by letting him enter the tomb first (Ref Mt 16:16-19).

The disappearance of Jesus is the first indication that he has risen; he has told his twelve apostles on their way to Jerusalem that he will be condemned to death there and be raised from the dead on the third day (Ref Mt 20:17-19). John affirms that when he enters the empty tomb and discovers the linen clothes lying flat, "he saw and believed" (Jn 20:8). The napkin that has been on Jesus’ head is rolled up, and the linen clothes are supporting evidence of the resurrection. No thief would have taken the time to unwrap Jesus’ corpse and fold his burial clothes neatly in the tomb. Grave robbers at that time usually stole the expansive linens and left the body behind and not the other way around. This suggests that John realizes from the empty tomb's condition that the absence of Jesus' body could not have been of human doing (Ref CCC 640, ICSB P199). Even the roman soldiers on guard of the site have testified about the empty tomb (Ref Mt 28:11-15).

The disciples then returned to their homes. As Mary Magdalene stands outside the tomb weeping, she looks inside and sees two angels in white. She turns around but does not recognize the risen Jesus whom she thinks to be the gardener. When Jesus said to her “Mary”, she said to him in Hebrew ‘Rabbouni’ which means Teacher”. Jesus asks her to “go to my brothers and tell them”, “I am ascending to my Father and your Father, to my God and your God” (Jn 20:18). Such a great statement of love from Jesus! His Father and become our Father, His God our God!

During his ministry, Jesus always distinguishes his divine sonship from that of his disciples by never saying "our Father", except to teach them to pray “The Lord’s Prayer”, "You, then, pray like this: 'Our Father'"(Mt 6:9, Ref CCC 443). In the Paschal mystery, by his Death, Christ liberates us from sin; by his Resurrection, he reinstates us in God’s grace and brings about our filial adoption so that those who “have received him … become children of God’’ (Jn 1:12, Ref CCC 654). Now as he is risen, Jesus emphasizes that the faithful are his brothers and sisters, his Father has become our Father, his God our God (Ref Jn 20:18).

On this Easter Sunday, we commemorate that Jesus has opened for us the way to a new life by his Resurrection (Ref Rom 6:4). How are we to walk on this way as Jesus’ brothers and sisters? In the second reading, St. Paul gives us a clue, that is, we must “seek the things that are above”, “where Christ is” (Col 3:1).