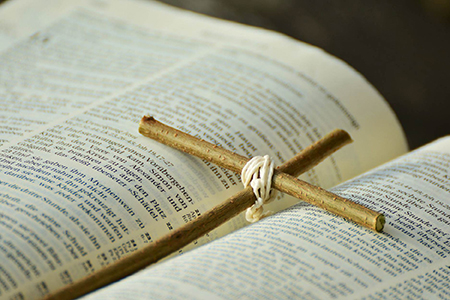 In the 7-day creation account of Genesis, the Holy Spirit appears as “a mighty wind [that] swept over the waters” (Genesis 1:2). His appearance reveals that God’s “creative action” involves not only the Father, but also the Son and the Spirit (CCC292). The Son is involved because “all things came to be through him, and without him nothing came to be” (see John 1:1-3). The Spirit’s participation, on the other hand, is in the form of “a mighty wind…over the waters”, just as he grants us eternal life through the baptismal water.

The biblical tradition sees the created universe as a cosmic temple. All of creation is a sacred place in which God dwells. Influenced by this biblical view, the salient features of ancient and medieval church architectures often included a gigantic dome-shaped roof with stained-glass artworks meant to elicit from the believers a sense of awe at the sacredness of the universe out there, and of the church building itself; both of which are microcosms of the real thing – God’s heavenly Temple above.

With this beautiful biblical concept in mind, we can understand why many biblical scholars see the creation epic of Genesis as a temple-building account. God’s plan is to create a world or build a temple that is good and holy. The culmination of this “7-day” undertaking of the Lord is the worship of the Sabbath (note 1). In other words, all creatures, top among them, humans, are created for the sole purpose of worshipping God in this cosmic temple of the universe. “Worship” in its most fundamental sense is to live or exist in the right relationship with God. One who worships well is one whose existence is rightly ordered or properly aligned to God, reflecting his glory (note 2). Therefore, worshipping God, when understood in this sense, is as essential as breathing and eating. Nothing in the cosmic temple of the universe, even the flowers in the field and the animals in the farm, can exist without worshipping God.

The special relationship between the Spirit and God’s holy Temple, first alluded to in the Genesis creation account, is further exemplified in the Tabernacle and Solomon’s Temple.

The Tabernacle was essentially a portable temple that God asked Moses and Israel to build during Israel’s 40 years in the wilderness. When it was completed and erected in accordance with what God had commanded, the cloud of the Lord’s glory appeared and “overshadowed” it, filling and covering it so that “Moses could not enter the meeting tent” (Exodus 40:34-35).

Only when this inseparable relationship is properly understood can we appreciate the significance of Jesus’ promise at the Last Supper to the Church, as represented by the apostles: “[the Father] will give you another Advocate to be with you always…it remains with you, and will be in you…he will teach you everything and remind you of all that I told you” (Jn 14:16, 26).

Jesus’ promise is fulfilled in this Sunday’s first reading. The Spirit descends on the Church, as represented by the 12 apostles, on Pentecost: “like a strong driving wind…it filled the entire house in which they were [and] came to rest on each one of them [like] tongues as of fire” (Acts 2:2-3). The scene of the Holy Spirit’s appearance, so otherworldly and surreal, is reminiscent of his last two appearances referred to above in which he filled first the Tabernacle and then the Jerusalem Temple.

How are we supposed to understand these highly unusual but remarkably similar biblical scenes? Following the Book of Hebrews, we see the cosmic temple of the universe, the Tabernacle, and the Jerusalem Temple as “shadows” and microcosms of a larger and invisible reality - the “heavenly Temple” where God is enthroned, and where Christ, the true high priest, ministers and offers sacrifices on our behalf (cf. Hebrews 8:1-6, 9:23-26). The Divine Author uses them to help us visualize the Church of Christ in heaven, where all creation and the servants of the Old and New Covenants worship day and night (CCC 1138, Rev 4:4-11).

They also show us the inseparable relationship between the Spirit and the Church of Christ. As important as the Bible is, we place our trust in the Church magisterium’s guidance when it comes to important faith and moral issues because she has been given the special grace of the guidance of the “Spirit of truth”, who will guide her to all truth (John 16:13). Woe are we if the Bible, which is subject to erroneous human interpretation, is our only guarantor of truth. Pope Benedict XVI minces no words in affirming this important biblical position: “All this helps us to see that, while in the Church we greatly venerate the sacred Scriptures, the Christian faith is not a ‘religion of the book’: Christianity is the ‘religion of the word of God’, not of ‘a written and mute word, but of the incarnate and living Word’” (Verbum Domini 7).