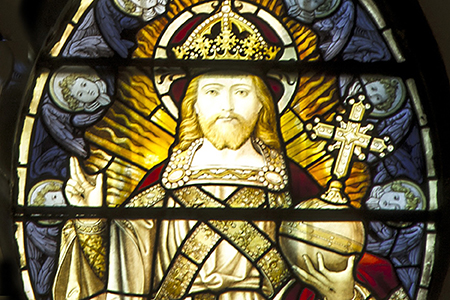 The Solemnity Our Lord Jesus Christ, King of the Universe

Daniel 7:13 - 14
As the visions during the night continued, I saw one like a Son of man coming, on the clouds of heaven; when he reached the Ancient One and was presented before him, the one like a Son of man received dominion, glory, and kingship; all peoples, nations, and languages serve him. His dominion is an everlasting dominion that shall not be taken away, his kingship shall not be destroyed.

Revelation 1:5 - 8
Jesus Christ is the faithful witness, the firstborn of the dead and ruler of the kings of the earth. To him who loves us and has freed us from our sins by his blood, who has made us into a kingdom, priests for his God and Father, to him be glory and power forever and ever. Amen. Behold, he is coming amid the clouds, and every eye will see him, even those who pierced him. All the peoples of the earth will lament him. Yes. Amen. "I am the Alpha and the Omega, " says the Lord God, "the one who is and who was and who is to come, the almighty."

John 18:33B - 37
Pilate said to Jesus, "Are you the King of the Jews?" Jesus answered, "Do you say this on your own or have others told you about me?" Pilate answered, "I am not a Jew, am I? Your own nation and the chief priests handed you over to me. What have you done?" Jesus answered, "My kingdom does not belong to this world. If my kingdom did belong to this world, my attendants would be fighting to keep me from being handed over to the Jews. But as it is, my kingdom is not here." So Pilate said to him, "Then you are a king?" Jesus answered, "You say I am a king. For this I was born and for this I came into the world, to testify to the truth. Everyone who belongs to the truth listens to my voice."

This year, the celebration of the solemnity of our Lord Jesus Christ, King of the Universe is highlighted by a reading from Daniel 7, a chapter that contains arguably some of the most intriguing scenes in a prophetic book filled with awe and wonder. The passage selected by the Church is in fact the “meat” of the whole chapter: an intriguing scene in Daniel’s mysterious night vision that culminates in the emergence of “one like a Son of man” from a setting that is both celestial and futuristic. The image has captured the imagination of many a biblical scholar over the centuries.

Who is this mysterious “Son of man” figure who is said to have “received dominion, glory, and kingship”; whom “nations and peoples of every language serve”; and whose “kingship shall not be destroyed” (Dan 7:14)? Let’s take a moment to unpack this incredibly rich and fascinating Old Testament prophecy long considered a classic by both Jewish and Christian scholars.

Before we plunge right in, let’s keep in mind that the “son of man” title, though unusual, has appeared in the Old Testament more than 100 times (see topical essay in Luke 17, Ignatius Catholic Study Bible). It’s used mostly as an idiom that refers to individuals as “humans” or “mere mortal” (see Num 23:19, Job 25:6, Eze 2:1, etc.). The novelty of Jesus’ use of the expression, however, is that he does so in the contexts of two extraordinary claims that no other scriptural figures have ever made.

The first claim is that he is the incarnate Son of God. St. Jerome sees in Jesus’ use of the
“Son of man” title the foreshadowing of the Son of God, who takes to himself human flesh (commentary on Daniel 7:13, Ignatius Catholic Study Bible). The title “Son of man” suggests that somehow the Son of God is human. In other words, it implies human nature and incarnation. When Daniel says “one like a Son of man”, what he is suggesting is that the Messianic figure would take the appearance of a man; but unlike a normal human being, he would not be born of human seed. The prophet pronounces the same truth elsewhere when he refers to the Messiah as “a stone cut by no human hands” (Daniel 2:34; ibid). St. Athanasius famously referred to the mystery of incarnation as “the Son of God became the Son of man, so that the sons of men could become the sons of God” (CCC460).

What does “the one like a Son of man” receive in Daniel’s night vision? Yes, “dominion, glory, and kingship” that shall be everlasting (Daniel 7:14). Not only that, “nations and peoples of every language serve him”. In other words, the kingship being revealed to Daniel is universal. If there’s any doubt about the identity of the Son of man figure in Daniel 7:13, the 2nd reading of this Sunday, selected from the Book of Revelation, has given us the clearest pointer: “Behold, he [Jesus] is coming amid the clouds” (Revelation 1:7). Inspired by the Holy Spirit, John clearly identifies Jesus as the Son of man of Daniel 7:13; he is “the Alpha and the Omega” (Revelation 1:8).

Surprise, surprise! The last piece of scriptural evidence we need to substantiate Jesus’ claim to eternal kingship is given to us by a gospel character least expected to do so. This is exactly the unspeakable joy of scriptural reading: surprise and enlightenment at every turn as the history of salvation unfolds before our very eyes! Who on earth are we talking about? No, it’s not one of the faithful disciples who followed Jesus; not a Pharisee who studied the Mosaic law through and through; not a scribe who knew the scriptures well; it’s the self-seeking, unjust, and totally confused Roman procurator of Judea presiding over Jesus’ trial – Pontius Pilate.

In the gospel reading, we see how Pilate is getting more and more anxious and confused as the trial of Jesus kicks into overdrive. The more Jesus explains his “kingdom”, the more Pilate is confused. After all, he is a mere Roman politician whose brain is not wired to understand the intricacies of Judeo-Christian concepts, least of all to engage in a theological discussion with the man who is the source and summit of all wisdom! Finally, in total confusion and exasperation, he takes the easy way out: sentencing Jesus to crucifixion. What’s the accusation for the accused that, according to Roman custom, is publicly displayed on an inscription fastened to the cross? “Jesus the Nazorean, the King of the Jews” or “INRI”, its acronym in Latin (John 19:19-20).

So many years later, we still behold and marvel at the same inscription above Jesus’ body every time we kneel and pray before the crucifix. In Jesus we have a King like no others. He is truly the King of the Jews – those of us who belong to the kingdom of the new Israel. He is the Messiah, the Anointed One; the new David, who rules with justice, love, and mercy; the “King of kings and Lord of lords” (Revelation 19:16). His is an everlasting kingdom that has already begun in the here and now of his Church, the People of God; a People in communion in the Body of Christ; a People who are one, “not according to the flesh, but in the Spirit” (CCC 781).