Mary, the exemplar of widows 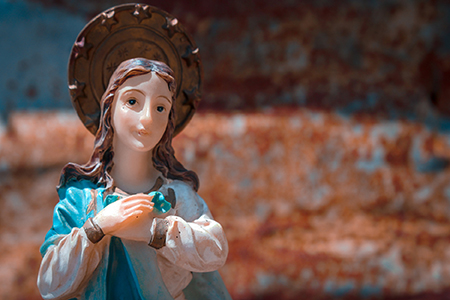 1Kings 17:10 - 16
In those days, Elijah the prophet went to Zarephath. As he arrived at the entrance of the city, a widow was gathering sticks there; he called out to her, "Please bring me a small cupful of water to drink." She left to get it, and he called out after her, "Please bring along a bit of bread." She answered, "As the LORD, your God, lives, I have nothing baked; there is only a handful of flour in my jar and a little oil in my jug. Just now I was collecting a couple of sticks, to go in and prepare something for myself and my son; when we have eaten it, we shall die." Elijah said to her, "Do not be afraid. Go and do as you propose. But first make me a little cake and bring it to me. Then you can prepare something for yourself and your son. For the LORD, the God of Israel, says, 'The jar of flour shall not go empty, nor the jug of oil run dry, until the day when the LORD sends rain upon the earth.'" She left and did as Elijah had said. She was able to eat for a year, and he and her son as well; the jar of flour did not go empty, nor the jug of oil run dry, as the LORD had foretold through Elijah.

Hebrews 9:24 - 28
Christ did not enter into a sanctuary made by hands, a copy of the true one, but heaven itself, that he might now appear before God on our behalf. Not that he might offer himself repeatedly, as the high priest enters each year into the sanctuary with blood that is not his own; if that were so, he would have had to suffer repeatedly from the foundation of the world. But now once for all he has appeared at the end of the ages to take away sin by his sacrifice. Just as it is appointed that human beings die once, and after this the judgment, so also Christ, offered once to take away the sins of many, will appear a second time, not to take away sin but to bring salvation to those who eagerly await him.

Many of us are familiar with today's Gospel story, commonly known as the Widow's Mite. The mite or lepton was the smallest and least valuable coin in Jesus' time. The widow's offering reflects both her financial situation and her social plight. Without husband, a widow in a patriarchal society is often vulnerable and destitute (rf Ru 1:21, Lam 1:1). Together with the orphans and the landless immigrants, widows frequently represent the poorest of the poor in the Jewish society (Jb 24:4, Is 10:2).

The early Church cared for widows so much so that seven men of good reputation were selected to be responsible for the matter (rf Acts 6:1-5). They were the first deacons and their first ministry appears to be a ministry to widows. St. James the Apostle says that the care of widows is a sign of true religion, “religion that is pure and undefiled before God and the Father is this: to visit orphans and widows in their affliction, and to keep oneself unstained from the world” (Jas 1:27).

Though “widow” connotes poverty and desolation, yet in the early Church, some widows constituted the first form of consecrated life. Historical records show that there are canonized widows who became consecrated religious or even founded religious congregations. Women like St. Bridget of Sweden, St. Rita, St. Elizabeth Seton or our own Canadian saints: St. Marie of the Incarnation, St. Marguerite d'Youville and Blessed Emilie Tavernier Gamelin. Their heroic examples of sacrifices, devotion, charity and unceasing prayers have won them the image as an “altar of God” by the early Fathers (rf Polycarp’s letter to the Philippians, Tertullian's Ad Uxorem, Methodius’ Symposium, the Didascalia Apostolorum). By such metaphor, the Church recognizes the contribution that widows make to the well-being and spiritual growth of the Christian community. Widows are not merely passive recipients of aids but active as a living altar by way of their lives. This movement of giving and receiving assistance between the Church and widows is best reflected in Mary, the mother of Jesus.

Standing beneath the cross, Mary is not only sharing her son's pain, she is also in solidarity with all the biblical widows in their hope of God's deliverance and vindication of their sufferings. In her widowhood, just like her son whose cross has transformed shame and death into glory and life, her weakness and isolation is now transformed into strength and inclusion. So, as John who takes Mary "into his home" and into his kinship, Mary, in her turn, also takes John and with him all humanity, into the eternal kinship with her son (Jn 19:27). Mary, the widow, was also present with the apostles, praying for the Holy Spirit to bring about the birth of the Church on Pentecost (rf Acts 1: 14).

We do not know what happened to the widow afterwards in today's Gospel reading. Would she be as lucky as the widow of Zarephath (First Reading) who received help from the prophet Elijah? Maybe or maybe not; but to the one who “gave from her want, all that she had to live on”, every choice, every decision and every action is a reflection of her total self-giving and trust in the Divine Providence (Mk 12:44). To such soul, immediate material reward is not important anymore. Obviously, we now find ourselves in a very different situation than those in the biblical time or in the early church period. Yet this holy widow, being immortalized by our Lord, is more than an example of generosity. She illuminates the fundamental respect for women, disregarding their state in life or their societal status. The treatment of these women is a challenge for Christians to demonstrate their love and true devotion to Christ.

Pope Francis: Mary’s faith as a journey, a prophecy and as compassion