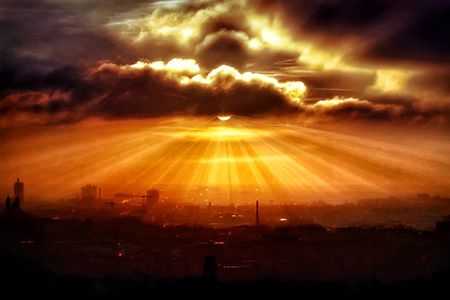 Acts 15:1-2, 22-29
Some who had come down from Judea were instructing the brothers, “Unless you are circumcised according to the Mosaic practice, you cannot be saved.” Because there arose no little dissension and debate by Paul and Barnabas with them, it was decided that Paul, Barnabas, and some of the others should go up to Jerusalem to the apostles and elders about this question. The apostles and elders, in agreement with the whole church, decided to choose representatives and to send them to Antioch with Paul and Barnabas. The ones chosen were Judas, who was called Barsabbas, and Silas, leaders among the brothers. This is the letter delivered by them: “The apostles and the elders, your brothers, to the brothers in Antioch, Syria, and Cilicia of Gentile origin: greetings. Since we have heard that some of our number who went out without any mandate from us have upset you with their teachings and disturbed your peace of mind, we have with one accord decided to choose representatives and to send them to you along with our beloved Barnabas and Paul, who have dedicated their lives to the name of our Lord Jesus Christ. So we are sending Judas and Silas who will also convey this same message by word of mouth: ‘It is the decision of the Holy Spirit and of us not to place on you any burden beyond these necessities, namely, to abstain from meat sacrificed to idols, from blood, from meats of strangled animals, and from unlawful marriage. If you keep free of these, you will be doing what is right. Farewell.’”

Revelation 21:10-14, 22-23
The angel took me in spirit to a great, high mountain and showed me the holy city Jerusalem coming down out of heaven from God. It gleamed with the splendor of God. Its radiance was like that of a precious stone, like jasper, clear as crystal. It had a massive, high wall, with twelve gates where twelve angels were stationed and on which names were inscribed, the names of the twelve tribes of the Israelites. There were three gates facing east, three north, three south, and three west. The wall of the city had twelve courses of stones as its foundation, on which were inscribed the twelve names of the twelve apostles of the Lamb. I saw no temple in the city for its temple is the Lord God almighty and the Lamb. The city had no need of sun or moon to shine on it, for the glory of God gave it light, and its lamp was the Lamb.

John 14:23-29
Jesus said to his disciples: “Whoever loves me will keep my word, and my Father will love him, and we will come to him and make our dwelling with him. Whoever does not love me does not keep my words; yet the word you hear is not mine but that of the Father who sent me. “I have told you this while I am with you. The Advocate, the Holy Spirit, whom the Father will send in my name, will teach you everything and remind you of all that I told you. Peace I leave with you; my peace I give to you. Not as the world gives do I give it to you. Do not let your hearts be troubled or afraid. You heard me tell you, ‘I am going away and I will come back to you.’ If you loved me, you would rejoice that I am going to the Father; for the Father is greater than I. And now I have told you this before it happens, so that when it happens you may believe.”

As we come close to the end of the Easter season, we have a great privilege to read the final chapters of the Book of Revelation in our second reading. Interestingly, though it is categorized as an apocalyptic scripture, it does not forecast disasters or events that may end the world. ‘Apocalypse’ in Greek, "apokálypsis", actually means “unveiling”. The book is revealing to us something of great significance which has been previously hidden but now is fully disclosed. Let us unpack this journey a little bit further.

John the visionary sees a city coming down from heaven to earth as a gift (Ref. Rv 21:10). Please notice that people are not escaping up to heaven, instead grace is coming down from heaven to take its place on earth. In the climax of the story, God does not destroy the earth, nor facilitates an escape of humanity from it, contrarily He renews it and establishes His order in it. What we hear about the divine kingdom has finally arrived, to a rightly ordered community under the lordship of God, in the midst of renewed heaven and earth. That is the Biblical vision. Please also note that the city itself is not individualistic but "communitarian", in which what God establishes for us is a community of love.

Then, John sees "a massive, high wall, with twelve gates where twelve angels were stationed and on which names were inscribed, the names of the twelve tribes of the Israelites" (Rv 21:12). Why would both “walls” and “gates” being emphasized here? Walls stand for identity. Israel’s identity as God’s chosen people is to live in communion with Him, worshipping Him and listening to His commandments. Gates stand for access. Israel is meant not for itself, but meant to be the "magnet" for all the nations, by which the world is gathered unto God. All these represent the fulfilment of Israel's mission; to be a gathering place of the world, a place in which all the nations orient toward God.

What follows is most important, in which John sees "no temple in the city, for temple is the Lord God almighty, and the lamb" (Rv 21:22). In ancient Israel, earthly Jerusalem was the temple. This reminds us of David who has brought the Ark of the Covenant into its capital city, and later on, his son Solomon, built the great temple to house the Ark, and that temple and its successors have lasted for a thousand years. It was the meeting place of heaven and earth, and where the right praise of Israel was on display. In this context, why would John see no temple in this new Jerusalem? This is because what he sees is a magnificent vision, in which the city itself has become a temple, that is to say "a place of right praise." The temple is not turning onto itself, but rather to sanctify the whole world, to turn the whole world into a temple! This is the climax and the fulfilment of the Biblical story.

Finally, John concludes, "The city has no need of sun or moon to shine on it, for the glory of God gave it light" (Rv 21:23). How splendid and marvelous it is! What God always wants from the beginning, is to shine light of His love into every city, every place, and every corner of our lives. In today's atheistic culture, however, we allow this light to extinguish all together. No, we need to allow the divine love to shed its light everywhere, and in all things. We need to turn the whole city into a holy temple. That is the whole "trajectory" of the whole Bible. That is what John sees in its fulfilment and realization of this great hope!

Let this passage in the Book of Revelation sinks into our heart once again, and let us read this in a meditative spirit, realizing that it is God’s great story reaching its fulfillment in its telling.

Acknowledgement
This is an excerpt from Bishop Robert Barron’s homilies, including
“No Temple in the New Jerusalem”, and “Apokalypsis”. For more information, please visit WordOnFire.org.