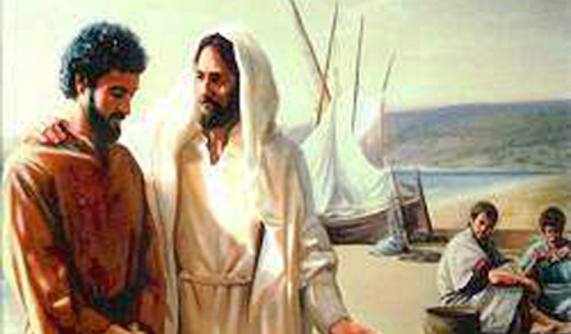 Peter, turning about, sees the disciple whom Jesus loved following, which also leaned on Jesus' breast at supper. It is not without meaning that that circumstance of leaning on His breast is mentioned, but to show what confidence Peter had after his denial. Peter who at the supper dared not ask himself, but gave his question about Jesus' betrayal to John to put to our Lord, has the superintendence over his brethren committed to him, and where before he gave a question which concerned himself to another to put, he now asks questions himself of his Master concerning others.

Our Lord then having foretold such great things of him, and committed the world to him, and prophesied his martyrdom, and made known his greater love, Peter wishing to have John admitted to a share of this calling, says, "And what shall this man do?" as if to say, "Will he not go the same way with us?" For Peter had great love for John, as appears from the Gospels and Acts of the Apostles, which give many proofs of their close friendship.

So Peter does John the same turn, that John had done him; thinking that John wanted to ask about himself, but was afraid, Peter puts the question for him. However, as they were now going to have the care of the world committed to them, and could not remain together without failing their mission, our Lord says, “What if I want him to remain until I come? What concern is it of yours?” as if to say, "Stick to the work I assigned you and do it: if I wish that he stays until My Second Coming, why should you care?" Jesus uses these words to teach us not to be impatient, nor curious beyond pleasing Him. He says this because Peter was ever hotblooded, and springing forward to enquiries such as this, to cool him down, and to teach him not to enquire farther.

John is said to have been the last who came to writing the Gospels, Christ having moved and roused him to the work; and on this account he continually sets forth his love for Jesus, alluding to the cause by which he was impelled to write. Therefore also he continually makes mention of it, to make his record trustworthy, and to show, that, moved from thence, he came to this work.

References:
St. John Chrysostom (Homily 88 on the Gospel of John)