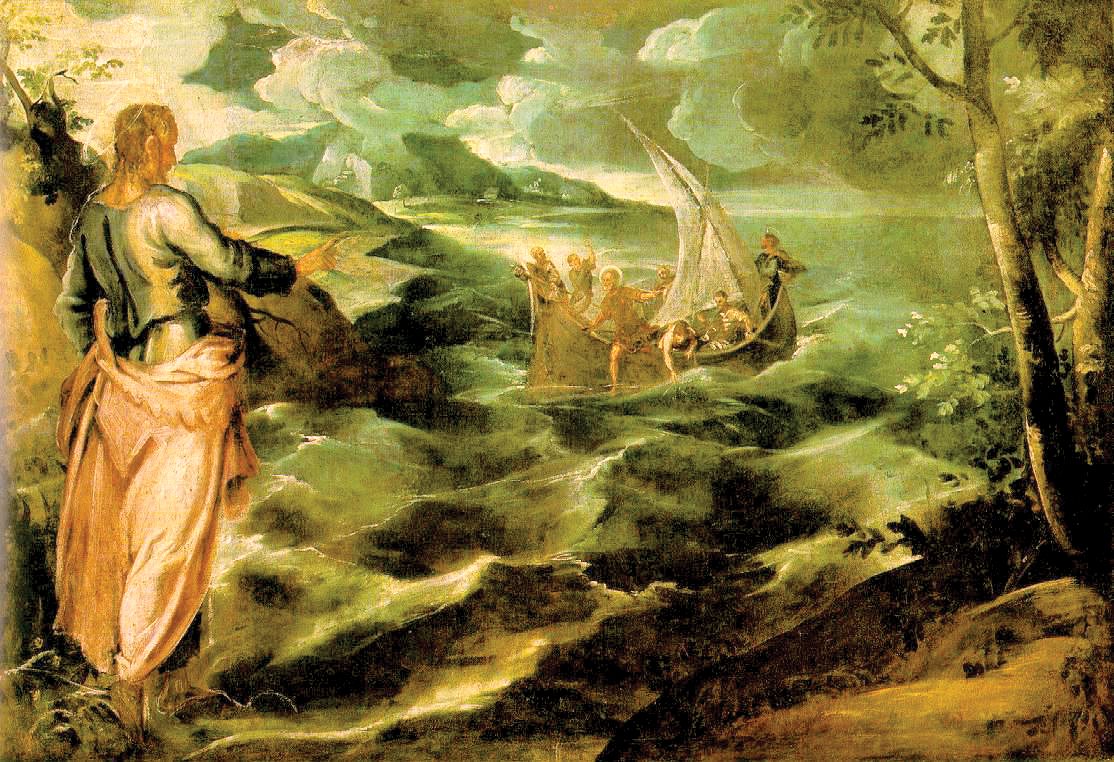 I speak the truth in Christ, I do not lie; my conscience joins with the Holy Spirit in bearing me witness that I have great sorrow and constant anguish in my heart. For I could wish that I myself were accursed and cut off from Christ for the sake of my own people, my kindred according to the flesh. They are Israelites; theirs the adoption, the glory, the covenants, the giving of the law, the worship, and the promises; theirs the patriarchs, and from them, according to the flesh, is the Christ, who is over all, God blessed forever. Amen.

After he had fed the people, Jesus made the disciples get into a boat and precede him to the other side, while he dismissed the crowds. After doing so, he went up on the mountain by himself to pray. When it was evening he was there alone. Meanwhile the boat, already a few miles offshore, was being tossed about by the waves, for the wind was against it. During the fourth watch of the night, he came toward them walking on the sea. When the disciples saw him walking on the sea they were terrified. “It is a ghost,” they said, and they cried out in fear. At once Jesus spoke to them, “Take courage, it is I; do not be afraid.” Peter said to him in reply, “Lord, if it is you, command me to come to you on the water.” He said, “Come.” Peter got out of the boat and began to walk on the water toward Jesus. But when he saw how strong the wind was he became frightened; and, beginning to sink, he cried out, “Lord, save me!” Immediately Jesus stretched out his hand and caught Peter, and said to him, “O you of little faith, why did you doubt?” After they got into the boat, the wind died down. Those who were in the boat did him homage, saying, “Truly, you are the Son of God.”

One couldn't help but notice the similarities of the experiences of Elijah and Jesus' disciples as described in the first and the Gospel readings. In both cases, men experienced frightening scenes – Elijah experienced “a strong and heavy wind”, “crushing rocks”, “earthquake”, “fire”; the disciples' boat was “being tossed about by the waves for the wind was against it”; “they were terrified” and “cried out in fear” – before God appeared and calmness set in.

Like Elijah, we look for God in terrifying and difficult moments of our lives. More often than not, it appears He is not there just when we need Him most, leaving us to flounder in fear and anxiety!

Jesus' disciples fared no better in their moments of difficulty: “they were terrified…they cried out in fear” (Mt. 14:26). However, with history crossing over the threshold of hope and entering into a new era of salvation in which God would come personally to “say to those whose hearts are frightened: Be strong, fear not!” (Isaiah 35:4; cf. Eze 24:11), the disciples were given a special assurance from Jesus, the Son of God: “Take courage, it is I; do not be afraid” (Mt. 14:27). “It is I” – literally, “I am” – Jesus revealed himself by alluding to God's self-revelation at the burning bush (Ex 3:14)! Yes, God has come indeed! “And the Word became flesh and made his dwelling among us” John affirmed (John 1:14).

But why do we often fail to find God in our moments of distress? Men's collective failure is epitomized in the person of Peter and his aborted attempt to walk on the water. Jesus told Peter, and through him to all of us, why his failure was all but certain: “O you of little faith, why did you doubt?” (Mt. 14:31).

To think about it: Isn't this the same problem that brought about the demise of our first parents when they doubted God who said of the fruit of the tree in the middle of the garden, “You shall not eat it or even touch it, lest you die”? (Genesis 3:3) So many years after Adam and Eve, we continue to make the same mistake, while Jesus' reproachful question to Peter - “O you of little faith, why did you doubt?” – continues to resonate in our hearts.

We must conclude from this reflection that when God, out of great wrath, called Israel a “stiff-necked” people (cf. Ex. 32:9), His anger was directed not only at Israel but also at us. Aren't we just as “stiff-necked” as Israel, if not more? Our only way out, which was also the only way out for Peter in the midst of a raging sea, is to reach out in faith to Jesus, who will catch us the way he stretched out his hand to catch the sinking Peter.