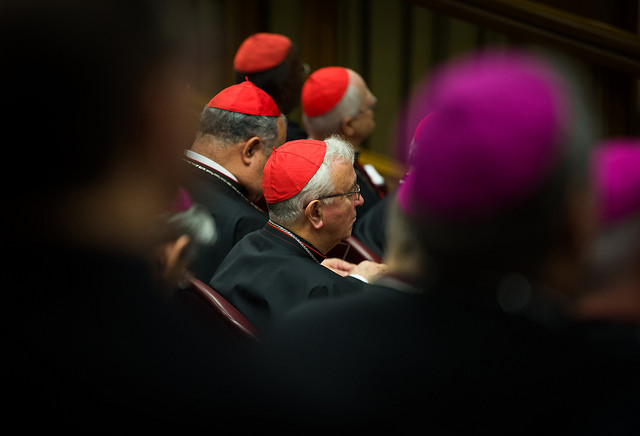 (CNA/EWTN News) During his weekly general audience on Wednesday November 5, Pope Francis said that a Church which does not foster communion with the bishop is unhealthy.

In his remarks to the crowds gathered in Saint Peter's Square, the Pope called on Christian communities to “nurture a sincere and profound communion” with the bishop, “starting with the priests and deacons.

“It is in the Bishop that the relationship of each Church with the Apostles is visible and with all the other communities,” he said, “united with their bishops and the Pope in the One Church of the Lord Jesus, that is our Holy Mother the Hierarchical Church.”

Turning to the reading of Paul to Titus read out during the audience, Pope Francis acknowledged it is “not easy” to practice the “many virtues” which Saint Paul commends to bishops, “because we are sinners.”

He therefore asked for prayers that they “can at least hope to be closer to the things that the Apostle Paul advises for all Bishops.”

Of all the “ordained ministries” to which Christ gives rise “in order to build up the Christian community as His Body,” the Pope said the ministry “of the bishop stands out.”

“Assisted by priests and deacons,” the Holy Father said “it is Christ himself who is present” in the bishop, “and who continues to take care of his Church, ensuring his protection and guidance.” In their “presence and ministry,” he added, “we can recognize the true face of the Church: she is our Holy Mother the Hierarchical Church.”

He explained that “the Church exercises her motherhood” through her bishops, priests, and deacons, sustaining the faithful from Baptism until death.

This motherhood is “expressed in particular in the person of the bishop and in his ministry,” the Pope said.

“As Jesus chose the Apostles and sent them out to preach the Gospel and shepherd his flock,” he said, “so the bishops, their successors, are placed at the head of the Christian community, as guarantor of their faith and as a living sign of the presence of the Lord among them.”

Pope Francis stressed that theirs “is not a position of prestige” or “an honorary role”: rather, it is one of service.

The Holy Father went on to say there is no place in the Church for a “worldly mentality”, in which the title of bishop is understood in the context of an “ecclesiastical career.” Rather, “being Bishop means keeping ever present the example of Jesus, as the Good Shepherd, came not to be served but to serve (cf. Mt 20:28; Mk 10:45), and to give His life for His sheep (cf. Jn 10:11).”

As shown by the many bishops who have been declared saints, the Pope said, “one does not ask for” this ministry, nor can it be bought.” Rather, it is accepted “in obedience, not in an attempt to climb higher but to lower oneself,” just as Jesus 'humbled himself and became obedient unto to death, even death on a cross'” (Phil 2,8).

“It is sad when we see a man who seeks this office and does all he can to get it and when he gets it does not serve, instead goes around like a peacock and lives only for his vanity,” the Pope said.

Another “precious element” of the bishop's ministry is their unity, Pope Francis said.

Just as the Apostles were “united as one family” around Jesus, so too the “Bishops too are a single college, gathered around the Pope, who is the guardian and guarantor of this profound communion that was so dear to Jesus and His apostles themselves.”

The Holy Father noted the beauty of such collegiality expressed by the bishops, alongside the Pope, such as was recently witnessed in the Synod of the Family.

“Despite living in places, cultures, sensibilities and traditions that are different and distant from each other,” Pope Francis said, there is nonetheless an “intimate bond” with one another “in Christ, in their communities.”

Source: Pope: You make the Church 'sick' if you don't support your bishop

Pope Francis: The Church is a family that teaches us to live as disciples of the Lord