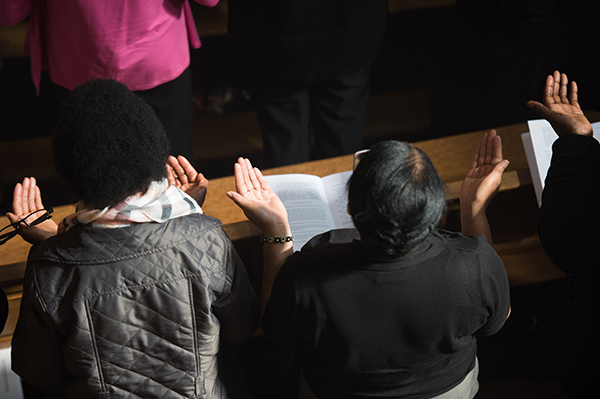 (CNA/EWTN News) In his weekly general audience on October 29, Pope Francis spoke of the visible actions carried out by the Church, explaining that they are an expression of her deeper spiritual reality rooted in the two natures of Christ.

“The visible and the invisible of the Church are not opposed, but are rather integrated in the one Church,” the Pope told those present in St. Peter's Square for his general audience.

This, he said, “is a reflection of the mystery of the person of Christ, who in his divine nature is inseparable from his human nature, which is placed entirely at the service of the divine plan to bring redemption and salvation to all.”

In his address Pope Francis continued his weekly catechesis on the Church, saying that although so far discussion has surrounded the Church's invisible, spiritual reality, she also has a visible reality that is crucial to her identity.

“We know that the Church is also a visible reality, expressed in our parishes and communities, and in her institutional structures,” the Roman Pontiff observed, saying that this visible aspect “is itself mysterious.”

The mystery of the visible reality of the Church lies in the fact that it embraces “the countless and often hidden” works of charity which are carried out by believers around the world, the Pope noted.

He emphasized how this visible structure is not only limited to the bishops or clergy, but rather it includes “all baptized people who believe, hope and love, doing good in the name of Jesus, and in this way bringing Him close to the life of our brothers.”

Because of this it is apparent that the visible and invisible aspects of the Church are not opposed, but are instead integrated in the one and only Church, the pontiff noted, saying that in order to understand this mystery, we must look to Jesus himself.

“Just as Christ's humanity serves his divine mission of salvation, so too, with the eyes of faith, we can understand how the Church's visible dimension is at the service of her deepest spiritual reality,” he explained.

The Church is called to be close to each person through her sacraments and witness to Christ in the world, the Pope continued, adding that this closeness must begin with the poorest, the marginalized, and those who suffer.

“Let us ask the Lord to enable us to grow in holiness and to be an ever more visible sign of his love for all mankind,” he prayed, saying that it's the mission of the Church to bring “the compassionate and merciful gaze of Jesus” to all mankind.

Source: The Church's mystery: it's both visible and spiritual, Pope says

Pope Francis: The Church is a family that teaches us to live as disciples of the Lord