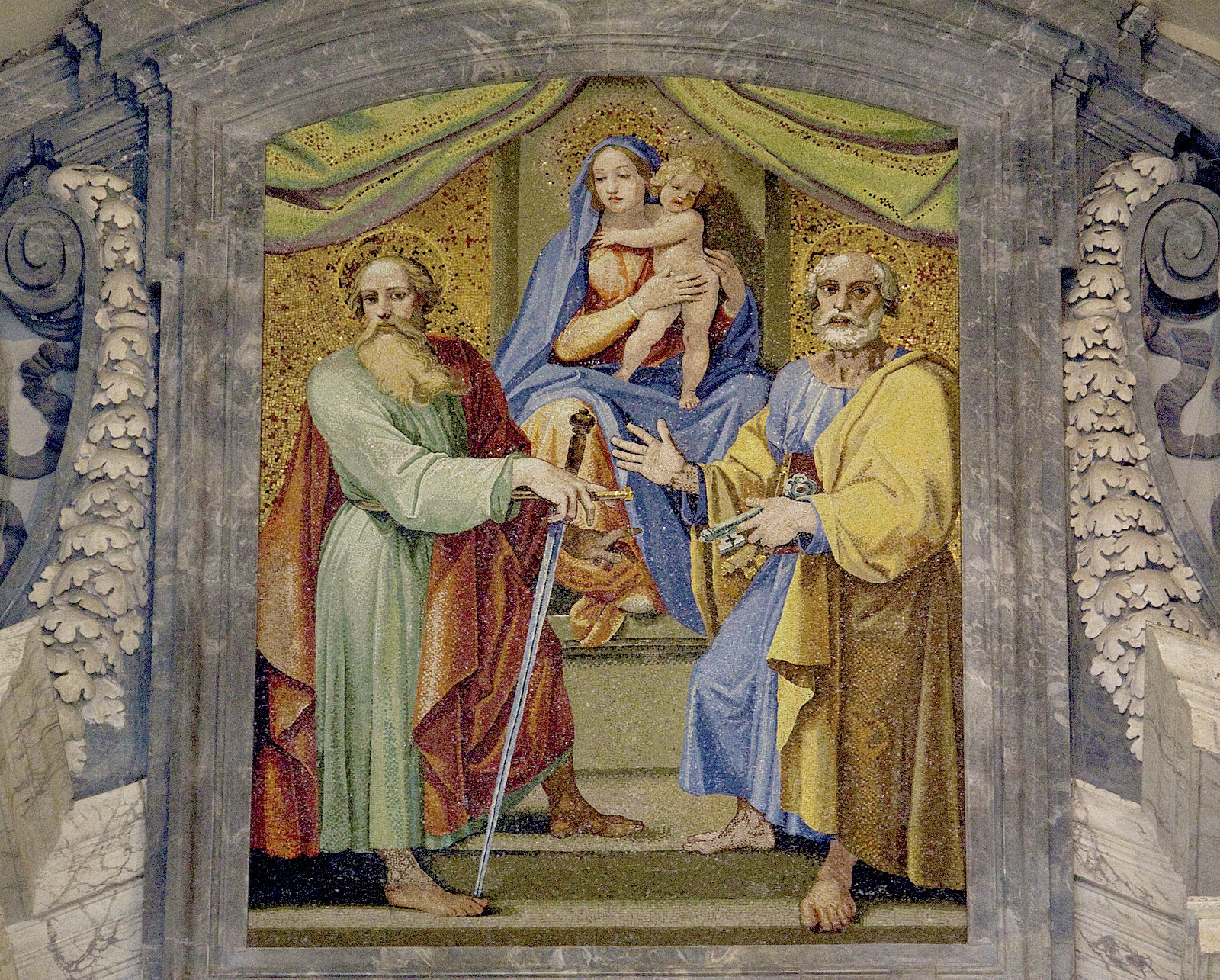 In those days, King Herod laid hands upon some members of the Church to harm them. He had James, the brother of John, killed by the sword, and when he saw that this was pleasing to the Jews he proceeded to arrest Peter also. –It was the feast of Unleavened Bread.–He had him taken into custody and put in prison under the guard of four squads of four soldiers each. He intended to bring him before the people after Passover. Peter thus was being kept in prison, but prayer by the Church was fervently being made to God on his behalf.

On the very night before Herod was to bring him to trial, Peter, secured by double chains, was sleeping between two soldiers, while outside the door guards kept watch on the prison. Suddenly the angel of the Lord stood by him and a light shone in the cell. He tapped Peter on the side and awakened him, saying, “Get up quickly.” The chains fell from his wrists. The angel said to him, “Put on your belt and your sandals.” He did so. Then he said to him, “Put on your cloak and follow me.” So he followed him out, not realizing that what was happening through the angel was real; he thought he was seeing a vision. They passed the first guard, then the second, and came to the iron gate leading out to the city, which opened for them by itself. They emerged and made their way down an alley, and suddenly the angel left him. Then Peter recovered his senses and said, “Now I know for certain that the Lord sent his angel and rescued me from the hand of Herod and from all that the Jewish people had been expecting.”

I, Paul, am already being poured out like a libation, and the time of my departure is at hand. I have competed well; I have finished the race; I have kept the faith. From now on the crown of righteousness awaits me, which the Lord, the just judge, will award to me on that day, and not only to me, but to all who have longed for his appearance.

The Lord stood by me and gave me strength, so that through me the proclamation might be completed and all the Gentiles might hear it. And I was rescued from the lion's mouth. The Lord will rescue me from every evil threat and will bring me safe to his heavenly Kingdom. To him be glory forever and ever. Amen.

When Jesus went into the region of Caesarea Philippi he asked his disciples, “Who do people say that the Son of Man is?” They replied, “Some say John the Baptist, others Elijah, still others Jeremiah or one of the prophets.” He said to them, “But who do you say that I am?” Simon Peter said in reply, “You are the Christ, the Son of the living God.” Jesus said to him in reply, “Blessed are you, Simon son of Jonah. For flesh and blood has not revealed this to you, but my heavenly Father. And so I say to you, you are Peter, and upon this rock I will build my Church, and the gates of the netherworld shall not prevail against it. I will give you the keys to the Kingdom of heaven. Whatever you bind on earth shall be bound in heaven; and whatever you loose on earth shall be loosed in heaven.”

St. Irenaeus, a 2nd century Church Father, had this to say about the church of Rome: “the very great, the very ancient and universally known church founded and organized at Rome by the two most glorious apostles, Peter and Paul.” He added: “with this church, by reason of its more excellent origin every church must agree…the tradition which comes from the apostles has been preserved” (Against the Heresies 3.3.2.)

On this coming Feast Day of Sts. Peter and Paul, Irenaeus' eloquent and much-quoted statement and similar statements made by other early Church Fathers that testified to the pre-eminence or even primacy of the church of Rome among other Christian and apostolic church communities find their resonance in the Gospel reading where Peter, the first leader of the Church after Christ, was made the “rock” upon which the Church of Christ would be built. “Rock” (or other words carrying the same conceptual meaning) is a very important scriptural word used in many places in the Old Testament to signify the Messiah. For example: “The stone the builders rejected has become the cornerstone” (Psalm 118:22). Christ, the Messiah, is the rock; in renaming Simon as “Peter” – “rock” – he made Peter his representative; he appointed Peter as the foundational leader of his Church.

In fact, the resonance turned into thundering when Jesus - the Lord of lords and King of kings (Rev 17:14) whose Kingdom of Heaven the kingdom of David prefigured and anticipated - gave Peter the “keys” that carried the complete and undeterred authority of binding and loosing. In a similar manner, the keys of the Davidic dynasty were given to Eliakim to allow him to govern Israel with absolute authority (Isaiah 22:20-22).

Today after 2000 years of Church history, sitting on the Chair of St. Peter is his 266th successor, Pope Francis. On this coming Feast Day of Sts. Peter and Paul, we Roman Catholics have every reason to rejoice and thank God in unison with the psalmist who sings in jubilation: “How numerous, O Lord, my God, you have made your wondrous deeds! And in your plans for us there is none to equal you. Should I wish to declare or tell them, too many are they to recount” (Ps. 40:6). Top among God's wondrous deeds that stand to be counted by us Roman Catholics is the special grace of being members of the Roman Catholic Church - “the very ancient and universally known church founded and organized at Rome by the two most glorious apostles, Peter and Paul.”