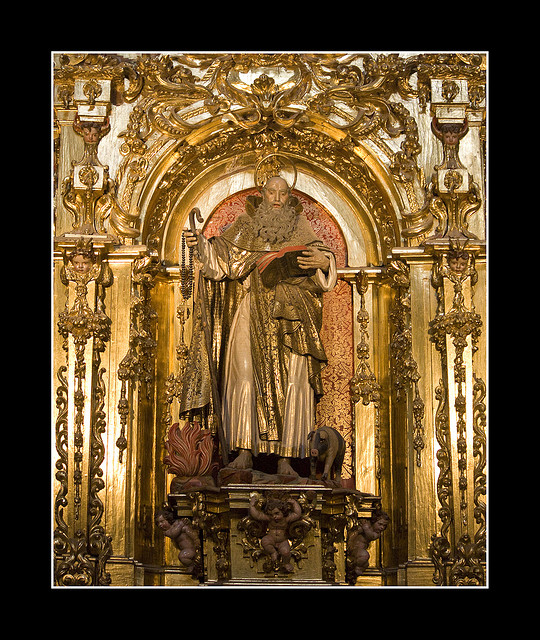 Anthony was born into a wealthy Christian family in Egypt. When he was twenty, his father and mother died and he was left alone with one little sister. Pondering over how the Apostles left all and followed the Saviour (Mt. 4:20) he entered the church one day, and it happened the Gospel was being read, and he heard the Lord saying to the rich man (Mt 19:21), 'If you would be perfect, go and sell that you have and give to the poor; and come follow Me and you shall have treasure in heaven.' Anthony then went out immediately from the church, and gave the possessions of his forefathers to the villagers. Having committed his sister to known and faithful virgins, and put her into a convent to be brought up, he devoted himself to discipline, training himself with patience and being unceasing in prayer, living as a hermit in the desert.

Anthony then sought out other hermits. Staying with each until he learned that man's way of virtue. He observed the graciousness of one; the unceasing prayer of another; he took knowledge of another's freedom from anger and another's loving-kindness, taking careful note of their common piety towards Christ and mutual love. Once learned, Anthony returned home and strove to unite the qualities of each, and was eager to show in himself the virtues of all. But the devil, who hates and envies what is good, could not endure to see such a resolution in a youth and attacked him with many foul temptations in order to derail him from the path of virtue. Yet Anthony fought back each attack with faith, prayers, and fasting. Thrusting the devil out of his heart, Anthony passed through the many temptations unscathed.

And so for nearly twenty years he continued training himself in solitude, never leaving the desert. When many were eager and wishful to imitate his discipline, and his acquaintances came and began to break down the door to his hermitage by force, Anthony came forth filled with the Spirit of God. And thus it happened in the end that cells arose even in the mountains, and the desert was colonised by monks enrolling themselves for the citizenship in the heavens. By frequent conversation Anthony increased the eagerness of those already monks, stirred up in most of the rest the love of the discipline, and speedily by the attraction of his words cells multiplied, and he directed them all as a father, forming the first Christian monastic community.

By the end of his life, Anthony's fame has been blazoned everywhere; that all regard him with wonder, is clear proof of his virtue and God's love of his soul. For not from writings, nor from worldly wisdom, nor through any skill, was Anthony renowned, but solely from his piety towards God. That this was the gift of God no one will deny. For throughout the Roman Empire, was the man heard of who lived hidden in the desert, unless it was God who makes His own known everywhere? For even if they work secretly, even if they wish to remain in obscurity, yet the Lord shows them as lamps to lighten all, that those who hear may thus know that the precepts of God are able to make men prosper and thus be zealous in the path of virtue.

O God, who brought the Abbot Saint Anthony to serve you by a wondrous way of life in the desert, grant, through his intercession, that, denying ourselves, we may always love you above all things. Through our Lord Jesus Christ, your Son, who lives and reigns with you in the unity of the Holy Spirit, one God, for ever and ever.