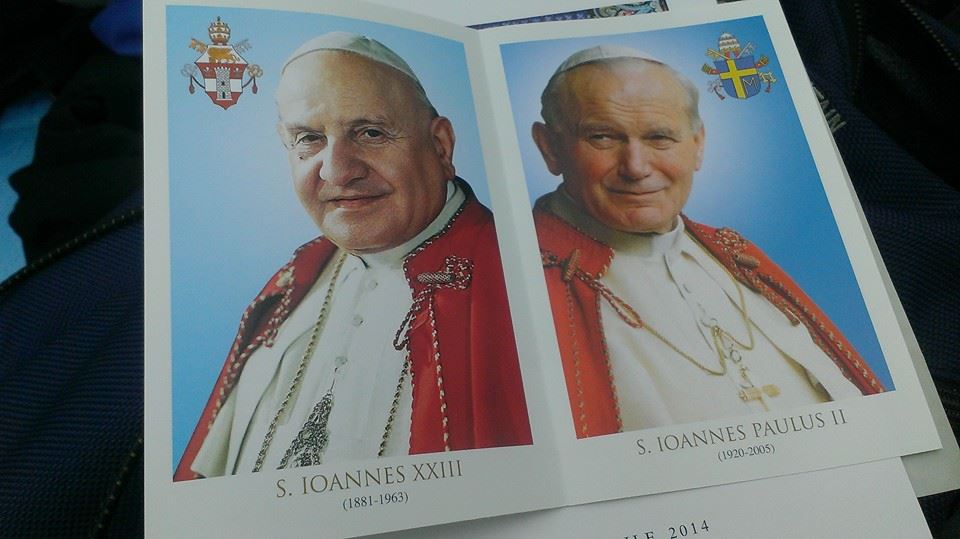 (CNA) At the canonization Mass for Popes John Paul II and John XXIII on Divine Mercy Sunday (April 27), Pope Francis emphasized the importance of Christ's suffering as a visible sign of divine love.

“The wounds of Jesus are a scandal, a stumbling block for faith, yet they are also the test of faith. That is why on the body of the risen Christ the wounds never pass away: they remain, for those wounds are the enduring sign of God's love for us,” the pontiff said in his homily.

Pope Francis reflected on Sunday's Gospel passage recounting the story of “doubting Thomas” who refused to believe in the risen Christ's appearance to the disciples, noting that only after Thomas was able to touch the wounds of Christ did he have faith.

“John XXIII and John Paul II were not afraid to look upon the wounds of Jesus, to touch his torn hands and his pierced side. They were not ashamed of the flesh of Christ, they were not scandalized by him, by his cross; they did not despise the flesh of their brother, because they saw Jesus in every person who suffers and struggles.”

The two newest saints of the Church “were priests, bishops and popes of the twentieth century. They lived through the tragic events of that century, but they were not overwhelmed by them,” said Pope Francis.

“These were two men of courage, filled with the ‘boldness' of the Holy Spirit, and they bore witness before the Church and the world to God's goodness and mercy.”

John XXIII and John Paul II's faithfulness to Christ was an acknowledgement of their belief that “God was more powerful” than any of the evils they faced,adding that "the mercy of God, shown by those five wounds (of Christ) was more powerful; and more powerful too was the closeness of Mary our Mother."

Such faith was tied to “a living hope and an indescribable and glorious joy” which “Christ bestows on his disciples.”

The “hope and joy of Easter” are won precisely through suffering, Pope Francis explained. They are “ forged in the crucible of self-denial, self-emptying, utter identification with sinners, even to the point of disgust at the bitterness of that chalice.”