Religious Life and Social Life Become One in Love 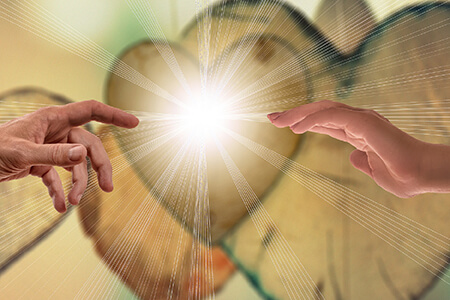 Exodus 22:20-26
Thus says the LORD: "You shall not molest or oppress an alien, for you were once aliens yourselves in the land of Egypt. You shall not wrong any widow or orphan. If ever you wrong them and they cry out to me, I will surely hear their cry. My wrath will flare up, and I will kill you with the sword; then your own wives will be widows, and your children orphans. "If you lend money to one of your poor neighbors among my people, you shall not act like an extortioner toward him by demanding interest from him. If you take your neighbor's cloak as a pledge, you shall return it to him before sunset; for this cloak of his is the only covering he has for his body. What else has he to sleep in? If he cries out to me, I will hear him; for I am compassionate."

1 Thessalonians 1:5C-10
Brothers and sisters: You know what sort of people we were among you for your sake. And you became imitators of us and of the Lord, receiving the word in great affliction, with joy from the Holy Spirit, so that you became a model for all the believers in Macedonia and in Achaia. For from you the word of the Lord has sounded forth not only in Macedonia and in Achaia, but in every place your faith in God has gone forth, so that we have no need to say anything. For they themselves openly declare about us what sort of reception we had among you, and how you turned to God from idols to serve the living and true God and to await his Son from heaven, whom he raised from the dead, Jesus, who delivers us from the coming wrath.

For many people, reading the Bible can be a mere obligation. Having heard so many good comments about the sacred book, they feel the need to commit themselves to reading it from cover to cover at least once, even though the mere thought of having to do that makes them lose sleep. Unfortunately, good things are bound to turn into bad when done in a half-hearted way. What happens is that in a somewhat subconscious way their less than enthusiastic mentality pushes them to look for every excuse they can find that allows them to abandon their dreaded reading project. As I reflect on this Sunday’s readings, my concern is that the first reading from Exodus 22:20-26 might just give them such an excuse.

“If ever you wrong [any widow or orphan]…I will kill you with the sword; then your own wives will be widows, and your children orphans…If you lend money…you shall not [be] demanding interest” (Ex. 22:22-24). “That’s it!” exclaims the lukewarm Bible reader, closing the Bible hard to show his disdain and determination. “If the God that the Bible wants me to know is so cruel and unreasonable, He is not for me!” Just like that, another grand Bible reading project bites the dust!

It’s important for all novice Bible learners to understand that the first reading, from Exodus 22:20-26, is part of the so-called “Covenant Code” of Torah (Exodus 20:22-23:19). It is so named because it is given after God’s theophany and the proclamation of the Ten Commandments on Mt. Sinai, where God’s covenant with the Israelites was solemnly ratified through Moses (Ex. 24). In the Covenant Code, we see two kinds of law at work: apodictic and casuistic.

The apodictic law is pronounced in the name of God. Its pronouncements are more general in nature. They represent the fundamental and perennial requirements of the Covenant. The opening verse of the first reading is a good example: "You shall not molest or oppress an alien, for you were once aliens yourselves in the land of Egypt” (Ex. 22:20). The apodictic law serves as a constant yardstick for critiquing concrete legal provisions such as those in the casuistic law.

Casuistic or case law, on the other hand, is not directly divine law. It contains provisions for very specific juridical issues, formulated based on juridical norms that are practically oriented. The intention is to build up a realistic social order in a particular historical and cultural setting. As such, the casuistic law is historically conditioned and entirely open to development and correction. The two cases in the first reading on mistreating a widow or orphan and lending money to a poor neighbor come from the legal corpus of the casuistic law (note 1).

Talking about fundamental and perennial requirements or norms of the Sinai Covenant, what are the most fundamental and enduring norms in the whole Torah on which everything stands? This is essentially the question raised by the “scholar of the law” in the gospel reading as he comes face to face with Jesus. In other words, of the 600+ commandments in Torah, which one or ones are the most significant? Which one or ones are so fundamental that they simply form the constant touchstone for understanding and judging all the other legal provisions? Jesus, the new Moses whose proclamation is final because he himself is the Word of God, declares in no uncertain terms: faith in one God (YHWH), i.e. love of God; and the social dimension of the same norm, love of neighbor (c.f. John 1:1, 14; Mt 22:37-39). “The whole law and the prophets depend on these two commandments”, he affirms (Mt. 22:40).

Incidentally, the Ten Commandments were given on two tablets. Three concerning the love of God were written on one tablet and seven concerning the love of neighbor were written on the other (CCC 2067). Love, in other words, makes the Ten Commandments a coherent whole (CCC 2069). Love is what brings our religious life (love of God) and social life (love of neighbor) into unity.