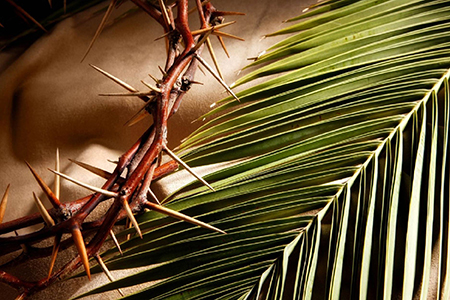 Many of us love watching movies, for instance, who can forget James Cameron’s epic “The Titanic” (1997)? As we immerse ourselves in the story, anticipating the ultimate catastrophe and tragedy, we may feel moved, and even shed a few tears at times; however, when the film is over, we quickly move on to the next greatest show on earth. Similarly, daily news about war, political unrest, natural disasters or refugee crises often capture our attention for the moment, we may even be moved by these vignettes of human tragedies; however, when the newscast is over, we, once again, swiftly move on to the next big news events. We willfully detach ourselves from what’s happening around us, perhaps out of fear, self-preservation, or distrust. We say, “I don’t care!”, simply because we feel helpless and refuse to believe that we always have a choice even among the rubbles of discord. In truth, we may have turned ourselves into bystanders of our own life!

As we enter the most solemn week of our Christian faith, the Palm Sunday readings unfold an all too familiar story of the final days of Christ on earth. Beginning with Jesus’ triumphant entry into Jerusalem, where the crowd puts on the greatest street party of all time, welcome Him with great excitement and enthusiasm; “spreading their cloaks on the road” and hailing Him “king”; followed by the Last Supper, Jesus’ agony and prayer in the Garden of Gethsemane, Judas’ betrayal of Jesus, the arrest and trial of Jesus, Peter’s denial of Jesus three times, Jesus’ crucifixion, and finally concluded with His death and burial (Lk 19:36,38). These are not just stories for our entertainment or even enlightenment, each scene urges us to act: to respond with every bone, sinew, and muscle, and every single breath in our lungs. We can no longer afford to remain bystanders. These stories demand a complete paradigm shift in our life!

Who is this man, described as the Son of God, the “Beloved, with whom [God] is well pleased”, “taking the form of a slave … humbled himself, becoming obedient to the point of death”; abandoned by His friends; whose body has suffered unimaginable torture, His face, disfigured, and beard, plucked by his opponents, and accepted every violence blows and lies with a silent dignity and inner peace (Mt 3:17, Phil 2:7, ref. Is 50:6)? Jesus, though “He was in the form of God, did not regard equality with God” (Phil 2:6). Jesus is God; but He is also one of us. Fully divine and fully human, He walks with us to show us how to live: with humility, obedience, courage, and most importantly, complete confidence in God. Jesus teaches us, by his own examples, that to lead means to serve others: “let the greatest among you be as the youngest,
and the leader as the servant. [...] I am among you as the one who serves.” (Lk 22:26-27). During Jesus’ moment of agony in the Garden of Gethsemane, He refused to abandon His mission. Instead, He prayed, “Father, if you are willing, take this cup away from me; still, not my will but yours be done” (Lk 22:42). Bearing the heavy cross on the way to His crucifixion, Jesus put aside His own pain and showed only concerns for others, “Daughters of Jerusalem, do not weep for me; weep instead for yourselves and for your children …” (Lk 23:28). Even with His last breaths, Jesus did not condemn, “Father, forgive them, they know not what they do” (Lk 23:34).

Echoing Isaiah’s beautiful and haunting servant song (it prefigures Jesus, the Suffering Servant) in its message as well as its poetic metrics and rhythm, St. Paul offers a meditation on Christ’s identity. He sketches the plot of Christ’s incarnation, “coming in human likeness”, His humility and obedience, as well as His humiliation, “he humbled himself, becoming obedient to death, even death on a cross”, and His exaltation, “God greatly exalted him … and every tongue confess that Jesus is Lord” (Is 50: 7,8,9-11). The hymn depicts Jesus as the “Suffering Servant of Isaiah”, who willingly submitted Himself to the injustice, violence and abuse of the people, many of whom had previously followed, and even supported, Him and proclaimed Him “king” when He entered Jerusalem in triumph, until He poured out His life for human iniquity (ref. Lk 19:38). These emotional verses, powerful enough to pierce into the hidden recesses of our hearts, carve out the model of Christian living. Not only do they inspire readers to be servants for one another, but also challenge each one of us to fight fear and despair with hope, distrust and insults with patience and compassion, lies with Spirit and truth, oppression and injustice with determination, violence with peace, the impossible with faith, and most of all, hate with love. St. Paul urges us to take courage and follow Christ’s footsteps, for “if God is for us, who is against us?” (Rm 8:31).

When darkness encroaches on us, defeated and suffocated by the injustice, lies, anger, tragedies and despair surrounding us; even when our own face is beyond recognition to ourselves, God sees us and hears our cries, “My God, my God, why have you abandoned me” (Ps 22:1). During challenging times, when called to stand up for the truth and with each other, and serve our neighbours, let us hold fast to the true vine, Jesus, and resolve to march on, united in our mission without fear or reservation. Jesus said, “Abide in me as I abide in you. [...] Those who abide in me and I in them bear much fruit because apart from me you can do nothing” (Jn 15:5, 7). May we take heart to God’s words, take courage to walk with Christ, give our backs to those who beat us and our faces to those who despise us. May we no longer crouch in fear when darkness envelops us; even “if the sky … should tumble and fall, or if the mountains should crumble to the sea” (“Stand by Me”, Ben King/Jerry Leiber/Mike Stoller). When we stand by Christ, He stands by us!