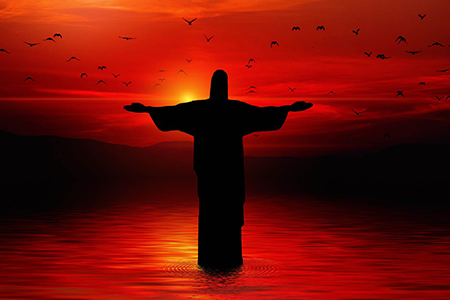 Remember the word that I said to you, ‘Servants are not greater than their master.’ If they persecuted me, they will persecute you…” (John 15:20). Jesus’ words to his disciples before his suffering and death resonates in our hearts as we hear this Sunday’s readings.

It doesn’t take long for Jesus’ warning to come true. Soon after Pentecost when the Church experienced the fiery outpouring of the Spirit, Peter and John are performing healing and speaking ministries in the temple area when they are taken into custody by the Sanhedrin, questioned, ordered not to teach in Jesus’ name again, and then released (Acts 3-4). Again, in this Sunday’s first reading, we see them stand before the Sanhedrin, defending themselves bravely and convincingly against the Jewish leaders’ accusation that their speaking activities were meant “to bring this man’s blood upon us” (Acts 5:28).

According to Church tradition, Peter was eventually martyred in Rome during Emperor Nero’s persecution of Christians. So was St. Paul. Persecution of Christians was a constant theme in the beginning of the Church. St. Polycarp (d.155), St. Justin (d.165), St. Perpetua (d.203), St. Lawrence (d.258) - one after another, multiple holy men and women of the early Church were martyred by Rome.

The martyrdom of St. Ignatius (d.115), the Patriarch of Antioch, who was a disciple of St. John the Apostle, was particularly well-known in early Church history. He was a very holy man. Tradition had it that he willingly accepted the crown of martyrdom and refused any offer to save him from being thrown to the beasts, saying, “I am God’s wheat and shall be ground by the teeth of the wild animals” (note 1). In the seven letters he wrote when he was on his way to martyrdom from Antioch to Rome, we find the first reference to the name “Catholic Church” (note 2).

Against all odds, the Catholic Church just continued to grow until the Christian faith was officially legalized by Rome, her persecutor, at the time of Emperor Constantine. As if this weren’t ironic enough, with this newly obtained status, the Church of Christ quickly grew and eventually became known as the Roman Catholic Church. Headed by the Pope, St. Peter’s successor and Christ’s Vicar here on earth, she has been handed down to us from generation to generation through apostolic succession (cf. Matthew 16:18). Tertullian, one of the Early Church Fathers of the second century, famously said, “The blood of martyrs is the seed of the Church” (note 3). How true!

Unfortunately, Jesus’ words to the apostles in John 15, already proven true in the history of the Church, is a message not restricted to only the early Church. It is a perennial warning that is applicable not only to the apostles, martyrs, Church Fathers and the Church of all ages; it’s also applicable to us in the present age. In addition to modern day political persecutions and religious suppressions happening to Church communities everywhere under various totalitarian regimes, the Church is constantly under siege from all sides by hostile authorities, special interest groups, power-hungry governments, and a secular world that sees the Church’s teaching on faith and morals as an infringement on the individual’s “rights and freedoms”. As good Christians, we must take to heart what Peter and the apostles said when they were confronted with the same challenge before the Sanhedrin: “We must obey God rather than men” (Acts 5:29).

But how do we know what teaching is from God and what is from men? Surely, Jesus would not leave us as orphans on this important issue (John 14:18). Before his ascension to the Father, he entrusted his sheep to Peter, his Vicar on earth, for him to “tend” and “feed” (cf. John 21:15-17). Blessed with the special protection and guidance of the Holy Spirit, Peter and his successors, our Popes and bishops, continue to perform this sacred ministry so that over her 2000 years of history, the Church continues to go deeper and deeper into all the truth (John 16:13). When in doubt about faith and morals, we, the Church faithful or the sheep of Christ, can safely graze in the pastures of St. Peter and his successors – the Church (cf. Ps 23:2).