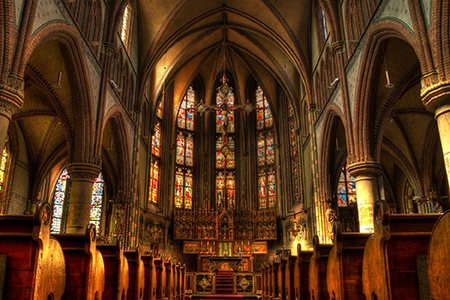 Acts 10:25-26, 34-35, 44-48
When Peter entered, Cornelius met him and, falling at his feet, paid him homage. Peter, however, raised him up, saying, "Get up. I myself am also a human being." Then Peter proceeded to speak and said, "In truth, I see that God shows no partiality. Rather, in every nation whoever fears him and acts uprightly is acceptable to him." While Peter was still speaking these things, the Holy Spirit fell upon all who were listening to the word. The circumcised believers who had accompanied Peter were astounded that the gift of the Holy Spirit should have been poured out on the Gentiles also, for they could hear them speaking in tongues and glorifying God. Then Peter responded, "Can anyone withhold the water for baptizing these people, who have received the Holy Spirit even as we have?" He ordered them to be baptized in the name of Jesus Christ.

1 John 4:7-10
Beloved, let us love one another, because love is of God; everyone who loves is begotten by God and knows God. Whoever is without love does not know God, for God is love. In this way the love of God was revealed to us: God sent his only Son into the world so that we might have life through him. In this is love: not that we have loved God, but that he loved us and sent his Son as expiation for our sins.

John 15:9-17
Jesus said to his disciples: "As the Father loves me, so I also love you. Remain in my love. If you keep my commandments, you will remain in my love, just as I have kept my Father's commandments and remain in his love. "I have told you this so that my joy may be in you and your joy might be complete. This is my commandment: love one another as I love you. No one has greater love than this, to lay down one's life for one's friends. You are my friends if you do what I command you. I no longer call you slaves, because a slave does not know what his master is doing. I have called you friends, because I have told you everything I have heard from my Father. It was not you who chose me, but I who chose you and appointed you to go and bear fruit that will remain, so that whatever you ask the Father in my name he may give you. This I command you: love one another."

“But you will receive power when the holy Spirit comes upon you, and you will be my witnesses in Jerusalem, throughout Judea and Samaria, and to the ends of the earth” (Acts 1:8). Jesus’ words to the apostles in the beginning of the Book of Acts outline the course of the entire book. With the guidance of the Holy Spirit, the apostles preach the gospel in Jerusalem, Judea, Samaria, and then throughout the Roman world. In a way, Acts is a prologue to the rest of the history of the Church whose mandate of catholicity is to bring the gospel to the ends of the earth because God “wills everyone to be saved and to come to knowledge of the truth” (Ignatius Catholic Study Bible – New Testament, p.203; 1Timothy 2:4).

The theme of catholicity or the universality of salvation, called a “mystery” by St. Paul, permeates the entire Bible. Mostly hidden in the Old Testament, it is fully manifested in Jesus’ time (Col 1:26-27, Eph 3:5-6, Rm 16:25-26). On this 6th Sunday of Easter, we catch a glimpse of it in the first reading – in the home of Cornelius. Often called the “Gentile Pentecost”, the scene depicts the outpouring of the gift of the Holy Spirit on the Gentiles, which surprises even Peter’s circumcised followers (Acts 10:45). The theme is presented skillfully by Luke as a reminder to the reader that the Church’s mission as the bearer of Good News after Jesus’ Ascension is to proclaim to all nations God’s unconditional love for every human being.

The Church’s important mission of reaching out to every nation is further affirmed in the second reading, as something rooted in the very identity of God who is love (1 Jn 4:8). Catholicity or universality, in the final account, is about love. It’s about inclusiveness. Salvation is not only for the Jews; it’s for everyone. It does not pretend to see no differences among us. But for the sake of love, it does endeavor to embrace and include everyone in spite of our differences. In doing so, God, who is love, is manifested here on earth. The gospel passage on Jesus’ new commandment - “love one another as I love you” (Jn 15:12) – chosen specifically to complement this Sunday’s theme of universality, is the common ground that connects Jesus’ mission and the Church’s.

The memories of my university days, once so vivid and dear to my heart, have been getting more and more blurry as I age. But I still remember the early days of my freshman year when I bumped into a couple of Chinese Catholics on campus. I was just an unbeliever then, who didn’t even know what the Mass was. For whatever reason, they invited me to attend a Mass at the Assumption Chapel on the university campus. After the liturgy, they introduced me to the chaplain of the Chapel’s campus ministry, who was a Basilian Father. The encounter that had seemed so casual and inconsequential was in fact the beginning of my lifelong involvement with the Catholic Church, taking me to the door of the sacred.

Like many other foreign students from Hong Kong at the time, I was very poor financially. One day, I passed by the MacDonald’s close to the university campus. My stomach was groaning in protest, for it had not consumed anything all morning and lunchtime was here. It was nagging me for a big Mac and wouldn’t mind an order of fries as well. But remembering the miserly amount I had in my bank account, we eventually had to settle for just an apple pie.

It was hard to command the English language. Harder still was the challenge of adjusting to the North American culture. I tried very hard to convince myself that I belonged in spite of feeling very marginalized. “Tough” was probably too much of an understatement of the first few months of my freshman year. A better word would be “desolation”; maybe “devastation”. There were times when I had second thoughts about my decision to leave home for overseas study.

Joining the Assumption Chapel community was a complete game-changer. Although my proficiency in English didn’t improve overnight, and my demeanor as an oriental remained foreign to the parishioners, I could see clearly the extra efforts that they made to make me feel welcome. It was not easy to get comfortable with people you didn’t really know. And the feeling was mutual. There were awkward moments when both parties wanted to be nice but just couldn’t think of anything to say or find any common interests. But one thing was clear to me: This was a community I could call home because in it I found receptivity, inclusiveness, and love.

While grateful to the Assumption Chapel community for their support at a time when I needed it most, I had never thought much about the reason for their kindness. To me, it was just something that every church community would do. While this is true, our reflection for this Sunday makes me realize that when the Catholic Church opens her arms to welcome all peoples – just as Peter had welcomed Cornelius and the uncircumcised in the second reading and the Assumption Chapel community had welcomed me – she does so not only because of charity, important as it is in Jesus’ teaching, it’s also because of catholicity. And the two are intertwined.