The flow of grace 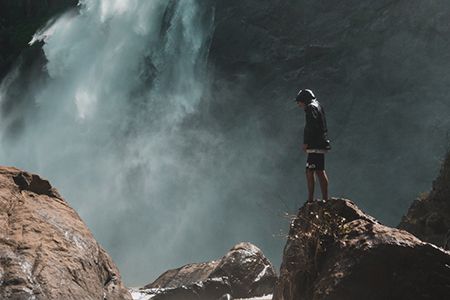 Numbers 11:25 - 29
The LORD came down in the cloud and spoke to Moses. Taking some of the spirit that was on Moses, the LORD bestowed it on the seventy elders; and as the spirit came to rest on them, they prophesied. Now two men, one named Eldad and the other Medad, were not in the gathering but had been left in the camp. They too had been on the list, but had not gone out to the tent; yet the spirit came to rest on them also, and they prophesied in the camp. So, when a young man quickly told Moses, "Eldad and Medad are prophesying in the camp, " Joshua, son of Nun, who from his youth had been Moses’aide, said, "Moses, my lord, stop them." But Moses answered him, "Are you jealous for my sake? Would that all the people of the LORD were prophets! Would that the LORD might bestow his spirit on them all!"

James 5:1 - 6
Come now, you rich, weep and wail over your impending miseries. Your wealth has rotted away, your clothes have become moth-eaten, your gold and silver have corroded, and that corrosion will be a testimony against you; it will devour your flesh like a fire. You have stored up treasure for the last days. Behold, the wages you withheld from the workers who harvested your fields are crying aloud; and the cries of the harvesters have reached the ears of the Lord of hosts. You have lived on earth in luxury and pleasure; you have fattened your hearts for the day of slaughter. You have condemned; you have murdered the righteous one; he offers you no resistance.

Mark 9:38 - 43 , 45 , 47 - 48
At that time, John said to Jesus, "Teacher, we saw someone driving out demons in your name, and we tried to prevent him because he does not follow us." Jesus replied, "Do not prevent him. There is no one who performs a mighty deed in my name who can at the same time speak ill of me. For whoever is not against us is for us. Anyone who gives you a cup of water to drink because you belong to Christ, amen, I say to you, will surely not lose his reward. "Whoever causes one of these little ones who believe in me to sin, it would be better for him if a great millstone were put around his neck and he were thrown into the sea. If your hand causes you to sin, cut it off. It is better for you to enter into life maimed than with two hands to go into Gehenna, into the unquenchable fire. And if your foot causes you to sin, cut if off. It is better for you to enter into life crippled than with two feet to be thrown into Gehenna. And if your eye causes you to sin, pluck it out. Better for you to enter into the kingdom of God with one eye than with two eyes to be thrown into Gehenna, where 'their worm does not die, and the fire is not quenched.'"

In this Sunday reflection, the Gospel of Mark has revealed to us an interesting problem. It is the problem of the Church becoming its own enemy; whereby the Church is undermining itself. In fact, the most effective mean of undermining our opponents is to divide and conquer, and our enemy loves to play tricks on us in the same way; by sowing sanction, jealousy, rivalry, turf wars, and exclusivism, so that we waste our energy on fighting with each other instead of serving the Lord. The Gospel is showing us how the issue is set up and unfolded.

In this week’s Gospel reading, John says to Jesus, “Teacher, we saw someone driving out demons in your name, and we tried to prevent him because he does not follow us” (Mk 9:38). Nevertheless, Jesus replies, “Do not prevent him. There is no one who performs a mighty deed in my name who can at the same time speak ill of me. For whoever is not against us is for us” (Mk 9:39-40). What a wonderful, powerful, and genuine attitude Jesus has! John is grumbling that somebody outside their circle may get credit, while Jesus, on the other hand, is not concerned with following the prescription nor making everything fits. A similar story can be found in the first reading. Joshua complains to Moses about the two men who have begun to prophesy in the camp when the spirit rests on them. Moses, in a similar tone as Jesus, replies, “Are you jealous for my sake? If only all the people of the Lord were prophets! If only the LORD would bestow his spirit on them” (Num 11:29). We can draw the same conclusion that both Jesus and Moses are concerned with is the “flow of grace”. God’s grace and spirit descend and are given to the people in His name. In Jesus, what matters are the driving out of demons, Israel’s victory over its enemies, the mission of the Church, bringing God’s love to the world, and being a conduit of grace. In contrast, our personal glory, position, privilege, honor, social status, are matters of indifference.

Furthermore, there is something good, right, and true about structures, order, and ritual in religious life. At the same time, the evanescence flow of grace, that can sometimes be channeled through prescribed “strictures” and limitations, also applies to other religion as well. Vatican II documents remind us that we must recognize “the seeds of the Word” present and active in the various religions (Ad Gentes, n.11; Lumen Gentium, n.17). The Catholic Church rejects nothing that is true and holy in these religions. It regards with sincere reverence those ways of conduct and of life, those precepts and teachings which, though differing in many aspects from the ones it holds and sets forth, nonetheless often reflect a ray of that Truth which enlightens all people (Nostra Aetate, n.2). These “rays of lights” are flowing ultimately from Jesus Christ. He establishes the Catholic Church as a privileged and appropriate means of expressions of His grace, but at the same time, signs of His grace can also be found outside of this explicit channel.

Therefore, let us follow Jesus’s principle with an open heart, to accept whatever we see that is good, and true, and right, even in other Christian denominations and world religions. It is His universal desire that we must “preach to all nations.” (ref. Mk 15:16) Let us stop huddling defensively in a corner and be satisfied with being out own little group against all others, but be committed and say to the Lord, “For whoever is not against you, O’ Lord, is for you.” May we place the mission of the Church as our great priority in life.