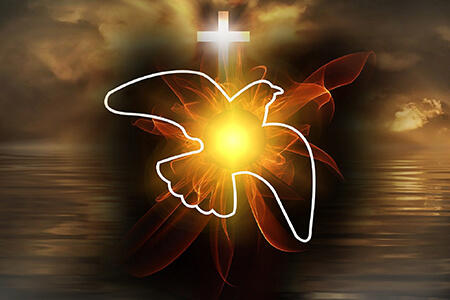 Isaiah 61:1-2A, 10-11
The spirit of the Lord GOD is upon me, because the LORD has anointed me; he has sent me to bring glad tidings to the poor, to heal the brokenhearted, to proclaim liberty to the captives and release to the prisoners, to announce a year of favor from the LORD and a day of vindication by our God. I rejoice heartily in the LORD, in my God is the joy of my soul; for he has clothed me with a robe of salvation and wrapped me in a mantle of justice, like a bridegroom adorned with a diadem, like a bride bedecked with her jewels. As the earth brings forth its plants, and a garden makes its growth spring up, so will the Lord GOD make justice and praise spring up before all the nations.

1 Thessalonians 5:16-24
Brothers and sisters: Rejoice always. Pray without ceasing. In all circumstances give thanks, for this is the will of God for you in Christ Jesus. Do not quench the Spirit. Do not despise prophetic utterances. Test everything; retain what is good. Refrain from every kind of evil. May the God of peace make you perfectly holy and may you entirely, spirit, soul, and body, be preserved blameless for the coming of our Lord Jesus Christ. The one who calls you is faithful, and he will also accomplish it.

John 1:6-8, 19-28
A man named John was sent from God. He came for testimony, to testify to the light, so that all might believe through him. He was not the light, but came to testify to the light. And this is the testimony of John. When the Jews from Jerusalem sent priests and Levites to him to ask him, "Who are you?" He admitted and did not deny it, but admitted, "I am not the Christ." So they asked him, "What are you then? Are you Elijah?" And he said, "I am not." "Are you the Prophet?" He answered, "No." So they said to him, "Who are you, so we can give an answer to those who sent us? What do you have to say for yourself?" He said: "I am the voice of one crying out in the desert, 'make straight the way of the Lord,'" as Isaiah the prophet said." Some Pharisees were also sent. They asked him, "Why then do you baptize if you are not the Christ or Elijah or the Prophet?" John answered them, "I baptize with water; but there is one among you whom you do not recognize, the one who is coming after me, whose sandal strap I am not worthy to untie." This happened in Bethany across the Jordan, where John was baptizing.

Hidden in the corners of my mind are traces of memories left behind by a long spiritual journey that eventually led me to the totality of embracing the Cross of Christ. Like distinctive visions from an old-time movie, they would play out before my eyes in my prayers and meditations – a little scratched and blurry here and there, but the experiences are as vivid as yesterday. The carolers who sang joyfully as they walked past my parents’ eatery on Christmas day when I was a small child; my grade 10 classmate who bravely spoke up against our teacher’s disparagement of her Christian faith, and then broke down and cried; strumming my guitar casually as I sang Amazing Grace for the first time together with several camping friends under a starry sky – experiences such as these and many others that had brought me closer to Christ continue to support and re-energize me as I inch forward in a faith expedition that never ends.

As unforgettable and powerful as these experiences were, none of them could really deliver the “knock-out punch” that I really needed in order to humble my puffed-up ego and enable me to truly surrender to Christ. But when it finally came (thank God it did!) it was in the least expected manner - in the form of a prolonged period of scriptural enlightenment. Through magisterial teachings and theological studies, the Holy Spirit was able to demonstrate beyond a shadow of a doubt that all of the Scripture was about Christ and formed a coherent whole only when it was read through the lens of Christ. That was no ordinary proposition. It’s tantamount to claiming that Jesus is everywhere in the Scripture, from Genesis to Revelation, from the Old Testament to the New Testament! The notion totally knocked me off my feet because I had always thought that Jesus, being a first century historical figure, was nowhere to be found in the Old Testament.

This Sunday’s first reading from Isaiah 61 is a case in point. It provides a good illustration of the power of the pneumatic punch that eventually knocked me right out.

“The spirit of the Lord GOD is upon me, because the LORD has anointed me” (Is 61:1) – Written more than 500 years before Jesus’ birth, this prophetic passage is already giving us many fine details about him (note 1). He is the Messiah – the Anointed One. He is to be anointed with the spirit of God and sent forth by the Father.

What’s the purpose of the sending forth? “Bring glad tidings to the poor”, “heal the brokenhearted”, set free the captives and prisoners, announce God’s favor and vindication (cf. ，61:1b-2a). In other words, Jesus is sent forth for all of us. In many ways, especially spiritually, every one of us is in extreme poverty. Like the “unclean” lepers in the Gospels, we are in dire need of healing and cleansing. Like Israel’s enslavement in Egypt, we are prisoners longing to be liberated. Beginning from Adam, the whole humanity has been fatally injured and unjustly persecuted by the power of Satan (cf. Lk 10:25-37; Pope Benedict XVI, Jesus of Nazareth I, pp. 199-200). But Jesus, the new Adam, has done us a huge favor. By the power of the Cross and his resurrection, we – humanity under persecution by Satan - have been vindicated. His saving grace is accessible to all of us. Anyone who is willing to embrace Christ and live in truth and righteousness is already victorious!

The Divine Author skillfully uses various images to present our Savior to us: He is clothed “with a robe of salvation”, “wrapped…in a mantle of justice”, “a bridegroom adorned with a diadem”, “a bride bedecked with her jewels” (Is 61:10). Small wonder that marriage is the main theme running through the pages of the Scripture. Our Savior comes to us as the Lover; he lovingly embraces us, the Beloved – the Church. He is a bridegroom adorned with a diadem. Compared this image to the fake bridegroom in Revelation who had “seven heads and ten horns, and on its heads were seven diadems” (Rev 12:3). More is not necessarily better (Rev 12:3)! If the last image of “a bride bedecked with her jewels” is a little baffling to some readers, just keep in mind that it’s referring to the Church – Jesus’ ”bride”. As the Body of Christ, the Church and Jesus are one.

Don’t know about you, but when I first understood – truly understood – the profound meanings of Old Testament passages such as what we’ve just read in this Sunday’s first reading, I was spiritually knocked unconscious, lying flat out and motionless on the canvas of the boxing ring! Like Jacob’s mysterious and bruising wrestle with God, I had battled Him for decades and He won with that knock-out punch (cf. Gen 32:25-30)! But that was not it. I had to take the same pneumatic punch over and over again in that prolonged process of scriptural enlightenment! “Love does no harm to the neighbor” (Rom 13:10). Surely, I wish to do my readers no harm. But for those of you who are studying the Scripture seriously, I hope the Holy Spirit would also punch your lights out the way He did it to me!